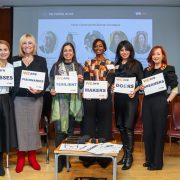 The Power of WE NYC presented a panel “en español” leading to discuss the topic of “Building Strategic Alliances”(Construyendo Alianzas Estratégicas). WE NYC (Women Entrepreneurs NYC) is an initiative based out of the New York City Department of Small Business Servicesdedicated to helping women start and grow their businesses. 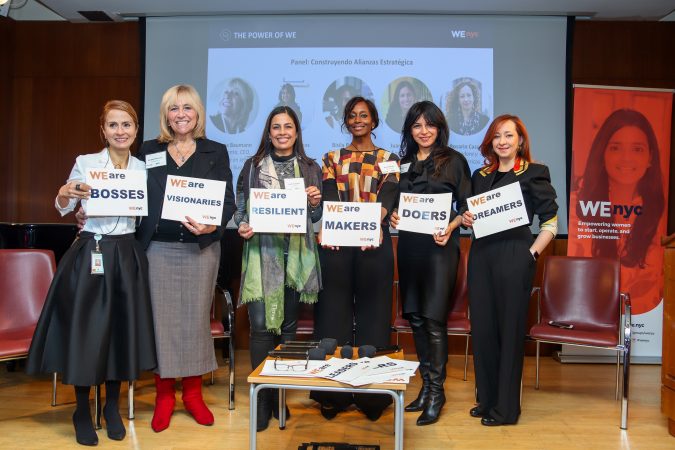 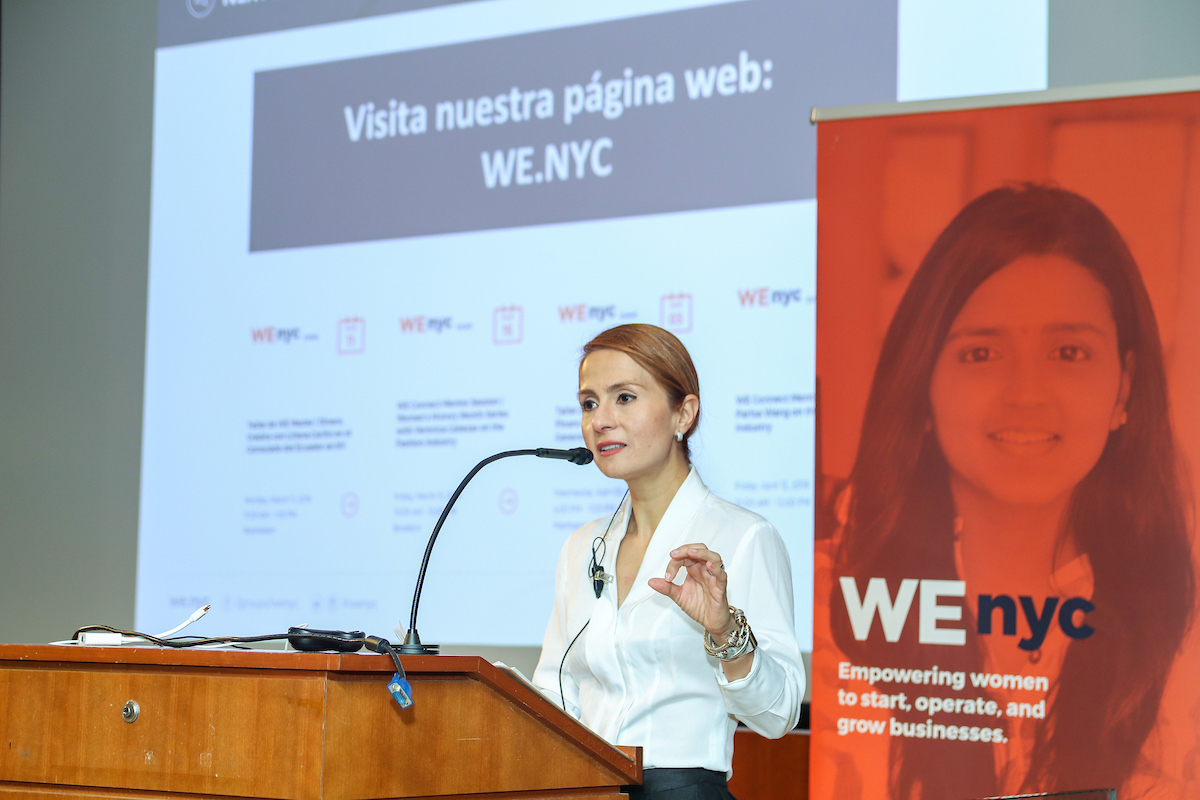 I was grateful for the opportunity to be invited as a panel moderator for this event, and to be able to meet with the WE NYC team led by Diana Franco, Director, Women Entrepreneurs NYC. In her remarks, Diana prompted the audience -mostly Spanish speaking entrepreneurs or to-be entrepreneurs- to think of strategic alliances and partnerships as ways of building and expanding their businesses rapidly and more effectively. 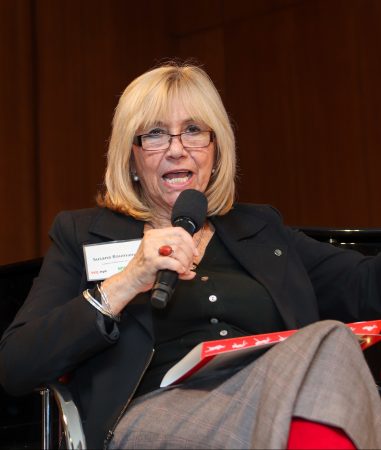 As explained on their event’s brief, “The WE NYC research conducted in 2015, found that 75% of the WE cited the lack of business networks as a challenge. Creating these networks will be especially helpful to obtain clients and build partnerships. There is no better approach to solving challenges than the famous saying ‘two heads are better than one,’ harnessing the strengths and abilities of others from different corners of the ecosystem is one of the most strategic ways for businesses to scale.”

How hard is it to be a Latina entrepreneur?

We know how difficult it is to be an entrepreneur … Moreover, when you carry what I call “the triple qualifier”: being a woman, an immigrant –or a descendant of immigrant parents or grandparents– and a Latina … working and struggling to sustain and grow your business.

We had the opportunity to listen and interact with a panel of women entrepreneurs who benefited from different types of strategic alliances and collaborations and with them facilitated the success of their respective companies.

Juanita Galvis: An enterprise based on collaborations 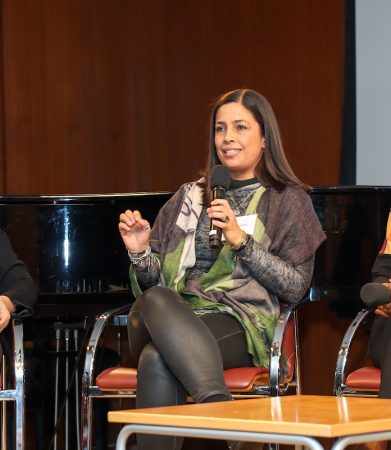 Juanita Galvis is Co-Founder and Head of Social Impact of The Assemblage, spaces of co-participation designed specially to promote growth, creativity, and personal and business well-being. These spaces can be used for work, community building and even flexible stays and event production and promotion.

The vision of Juanita’s company describes the values ​​that sustain their model as: collaboration, innovation, relaxation, growth, balance and impact. In the topic of collaboration, for example, they mention the assembly or connection with other creatives, leaders and entrepreneurs to develop projects that inspire social change and disrupt the established order.

Juanita spoke about her biggest challenge, which is a to be part of a family business with her ex-husband. “We have created a different type of relationship between us,” she said, “personal and professional. We established certain rules and we defined our areas of expertise so decisions are made that way. It is not impossible,” she explained. 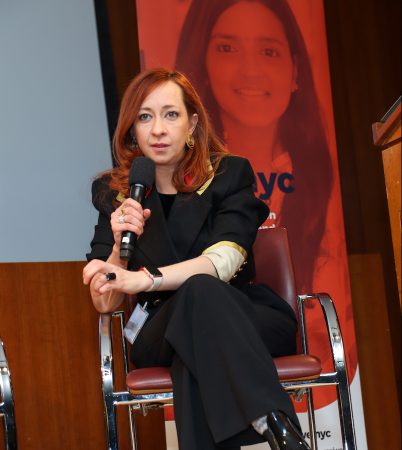 Rosario B. Casas is Co-Founder and CEO of  VR Americas, a company dedicated to expanding the borders of immersive technologies –Virtual Reality, Augmented, Mixed– in industrial applications. Rosario is a Colombian entrepreneur based now in New York with more than 7 years of practical experience in data and technology platforms and management roles.

She is also an enthusiastic advocate for growth of Women in Technology (STEM), co-founder of several strategic partnership models, member of the Big Data Advisory Board at Rutgers University, and has been a lecturer at TEDx, The World Summit on Innovation and Entrepreneurship , and The World Innovation Network TWIN Global, among others.

In addition to its virtual reality products, perhaps the most well-known project of VR Americas was the Telemundo AR campaign for the 2018 World Cup. Through an application, fans of the world could follow and support their favorite teams and players, witness crucial moments of the championship, share it in networks and even play with their favorite effects.

Rosario explained how she started her virtual reality company with two partners that understood their roles. “One is a nerd like me,” she said,” the other one is our out-and-about person, who finds clients partners.”

As a company that needs to develop a portfolio of present customers and at the same time increase the capacity of their company with a vision to the future, they are constantly looking at who their potential clients are and who can benefit from the technology they offer. “Remember that you need to solve a problem, a ‘pain’ that your customers cannot resolve by themselves,” Rosario said. 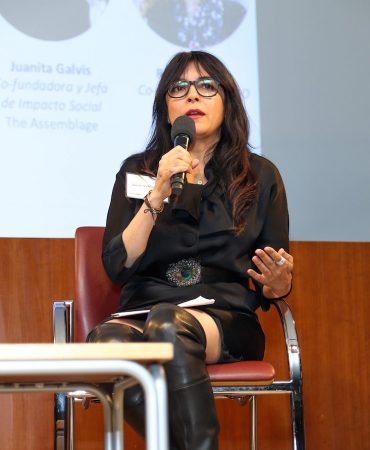 Sarah Valdovinos is Co-Founder of Walden Green Energy, a company focused on renewable energy projects. In addition to her work at Walden, Sarah makes investments in companies that fight climate change, including solar energy distribution companies in Latin America, charging station networks for electric vehicles, and other sustainable technology companies.

Previously, Sarah worked 10 years in investment banking. She entered the field of energy over twenty years ago at Southern California Edison. Sarah is first generation of a Mexican family, and she has also been the first of her family to graduate from college.

Getting capital from investors is one of the most important obstacles for all small businesses, especially for minority-owned companies. Many do not have the family network and social relationships that can become initial or angel investors.

Sarah defined early on that she was interested in sustainable energy but saw that money was an issue to achieve her goals. “I decided to pursue an MBA and work for a few years in the financial industry, where I not only acquired the knowledge to build my own business with two partners, but also the contacts and relationships I needed to fund my projects,” she explained.

Most impressive is Walden Green Energy’s rapid growth. In just 7 years, they started the construction of two projects that produce 150 MW of solar energy. “To give you an idea, it powers about 50,000 to 60,000 families,” Sarah explained. 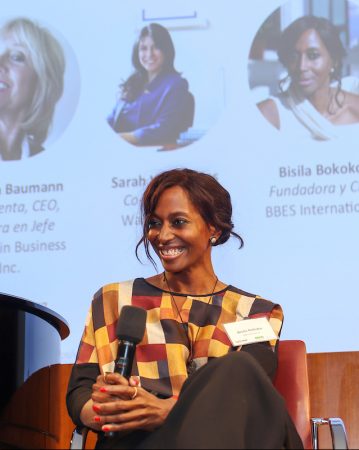 Bisila Bokoko is an award-winning bilingual speaker, television personality and advisor to world leaders. Bisila is the founder of BBES International,a business development agency based in New York that represents, promotes and markets brands to reach the global market. She also serves as an advisor to emerging leaders, providing guidance on personal branding and leadership that prepares them to move to the world stage and share their experience at a global market.

Bisila has shared her professional experience and her inspiring journey with audiences around the world during her 18-year career, and has been a presenter in diverse places such as the United Nations Organization in Switzerland, a keynote speaker in the Dominican Republic and in South Africa.

Bisila presents her company as a passport to other markets and she introduces herself as the “ambassador” of the brands she represents. “An Ambassador, like in real life, is someone who represents your brand with total knowledge and expertise about your company and is completely embedded in your company’s vision and goals. It is someone who can speak intelligently and convincingly to global strategic partners and get them interested in your product,” she explained.

BBES International mostly represent Spanish brands that have entered international markets such as Europe, South Africa, Latin America and the United States. “Before I take a new client and develop an international marketing strategy, we evaluate the company to see if they are ready for the jump, and the markets that best fit their needs,” she shared.

You might be interested: Ready to Run® Conference and Eleccion Latina pushes for more diversity in politics

The audience then got to make questions to these fantastic Latina entrepreneurs who are rapidly growing their businesses and sharing their experiences. We thanked them for their time,  it was truly an extraordinary panel about strategic alliances, and we learned from their successes! 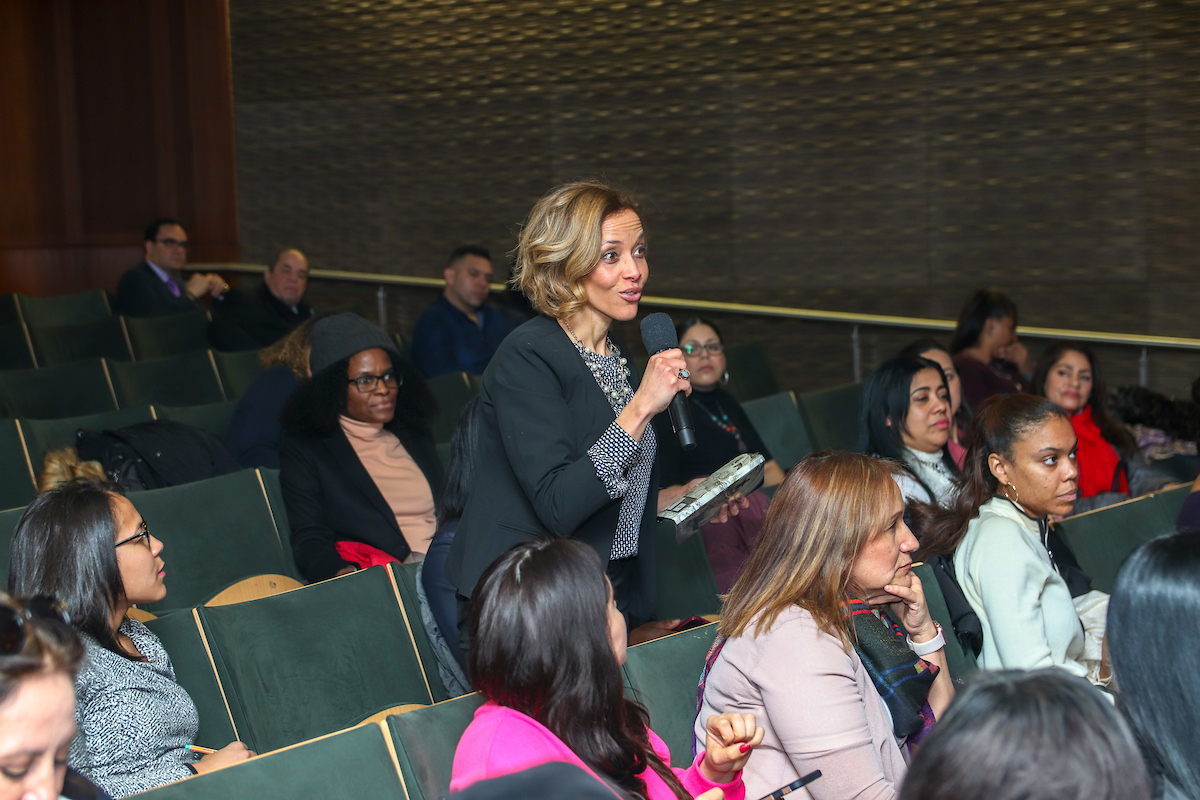