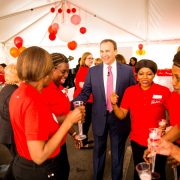 As the baby-boomer population increases, Latinos aging in America have become a “good news-bad news” kind of topic. On one side, Latinos continue to puzzle doctors and researchers by aging at a slower rate than other ethnic groups, a phenomenon called “the Hispanic Paradox.” On the other, evidence of health disparities, lack of health insurance and poverty levels make them a vulnerable group that requires special attention from policy makers and healthcare providers alike. We interviewed Roberto Muñiz, President and CEO of Parker, to help us understand how Latinos age in America. 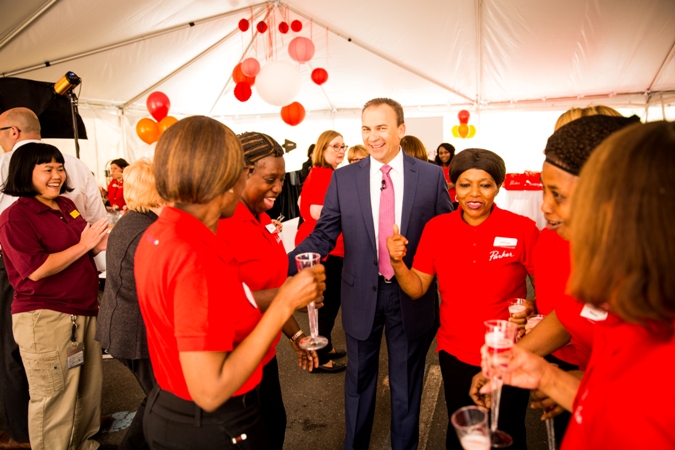 Roberto Muniz at a Parker event. (Photo courtesy of Parker)

The findings of a UCLA study published in Genome Biology may help scientists understand how to slow the aging process for everyone. It seems that Latinos age more slowly at a molecular level, explained Steve Horvath, a professor of human genetics at the David Geffen School of Medicine at UCLA, and these findings might be used in future aging research.

Researchers believe that Hispanic culture might contribute to this phenomenon — including being closer to their families, keeping fresher food in their diets with less fast food, and manual labor keeping workers in better shape.

Nobody more qualified to speak to this topic than Roberto Muñiz, who for nearly 20 years has been President and CEO of Parker, a best in class, non-profit, New Jersey-based aging services organization that recently celebrated its 110th anniversary. This long-term experience in the aging sector makes Muñiz the ideal expert to discuss how the Latino community views aging—especially cultural nuances such as potential stigma around nursing homes and assisted living facilities vs. living at home or with one’s family.

How do Latinos feel about aging?

“Latinos embrace aging and see it as a natural progression of life,” Muñiz told LatinasinBusiness.us. “They value family interactions and usually have a large, very close-knit family where the younger ones understand that they will eventually take care of the aging members,” he added.

Coming from a big family with six sisters, Muñiz recalls that there was always someone able to care for their mother. As she got older, she appreciated having family around.

“Latinos do, however, still fear aging because they have a higher rate of chronic health conditions, such as diabetes and obesity, than other ethnic groups. Regardless of this, Latinos really make aging part of life and tend to feel comfortable with that new stage,” he stated. 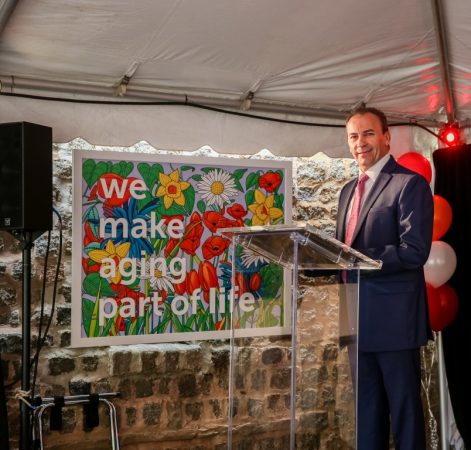 Roberto Muniz is uniquely qualified to talk about Latinos aging in America.

Research shows current nursing home admission rates for Hispanics are far below levels for other ethnic groups. Hispanics accounted for 5.5 percent of all nursing homes residents in the U.S. in the first quarter of 2016, according to government data.

“Hispanics have traditionally used formal long-term care services less than other US ethnic groups. They are less likely than Caucasians and African Americans to live in nursing homes and use of home health aides,” Muñiz explained.

Difficulty communicating because of cultural or language barriers is one of the factors contributing to their lower use of long-term care services. Traditionally, children, mainly women, take on the role of caregivers in a family.

However, as times change and more women are joining the workforce, there has been an increase in family members being placed in nursing homes or assisted living in America. “This trend is still observed in Latino families, but to a lesser extent,” Muñiz said.

“Since culturally Latino families feel the responsibility to care for their loved ones at home, many tend to feel guilty because they place a lot of emphasis on family unity,” he explained. “It is uncomfortable for them not knowing how their elders are being taken care of, but they recognize that although they’d prefer to support them themselves, the younger members have to work and deal with their own families issues,” Muñiz added.

Options for Latinos placed in assisted living and nursing facilities

Assisted living and nursing facilities in the U.S. are usually established by for-profit organizations. Although most nursing homes participate in the Medicaid programs, Medicaid is not accepted in most assisted living organizations, making it very expensive for those who cannot afford these services when they are most needed. 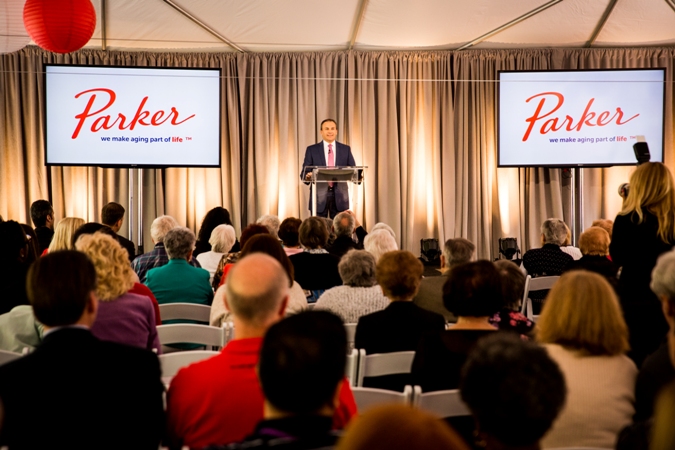 Roberto Muniz addressing the audience at a Parker event.  (Photo courtesy of Parker)

“Assisted living facilities are regulated by each State but they are less regulated in comparison to nursing homes,” explained Muñiz. And he continued, “Each state has different requirements; for instance, in New Jersey, regulations require that assisted living facilities that have been in operations for longer than three years must allocate at least 10 percent of their units for residents who are Medicaid eligible, allowing individuals with limited resources to participate in the State Medicaid waiver program,” he indicated. Raising awareness of these regulations is extremely important so that families can take advantage of this option.

Regarding nursing facilities, elderly Hispanics, more than non-Hispanics, depend more of nursing homes that are located in inner cities where typically Hispanics tend to reside, making it more accessible to family members. However, these facilities are usually characterized by severe deficiencies in performance, understaffing and poor care.

Role of “abuelas” in the Latino family

Due to salary gaps, educational disadvantages and lesser work opportunities, Latinas carry these disadvantages into retirement.  These economic circumstances have given “abuelas” a key role in the family.

“The “abuelas” contribute by helping with the children while parents are working,” Muñiz said. “Regardless of where the grandmother lives, she’s still the matriarch of the family and many times responsible for instilling core family values. Their relationship with their grandchildren is sometimes even stronger than the kids’ relationships with their parents. This connection may be affected when grandparents are placed in nursing homes or assisted living, but nevertheless grandparents are seen as the backbone of the Latino family.” Muñiz assured.

What Latinos aging in America expect from their future

Latinos aging in America have added a new challenge to the country’s already steep rise in its elderly population as baby boomers enter their retirement years. Policymakers must prepare for this shift in the aging population, as it is expected that by 2050, long-lived Hispanics will account for nearly 20 percent of those older than 65, four times the five percent they represented in the year 2000. However, it might help that a nationwide survey conducted by Parker found that 72 percent of Hispanics do not fear or worry much about aging at all, and 57 percent of Hispanics think of aging in positive ways using words like “hopeful,” “relevant,” and “vibrant.” 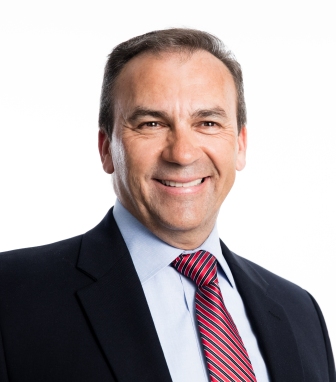 Roberto Muñiz arrived in America from Puerto Rico when he was 13 years old—one of 14 brothers, sisters, and half-siblings—speaking almost no English at all. He spent his youth in a tough area of Elizabeth, New Jersey, but found solace in volunteering at Alexian Brothers Hospital, where he received a free meal for every four-hour shift he worked. He then began to envision a future career in aging services, a sector in which he has been a national thought leader for more than a quarter century.

Muñiz is the chair of the board of trustees of New Brunswick Tomorrow, a board member of LeadingAge National and LeadingAge New Jersey, and he chairs their Education Committee. Roberto also serves on the Bergen County Advisory Council of the Division of Senior Services and is a founding member of the Life Enrichment Aging Project Professionals (LEAP).

Muñiz has served as a member of the New Jersey Commission on Aging, the New Jersey Advisory Council on Elder Care and the Governor’s Transition Policy Group on Health and Senior Issues.

Muñiz is a graduate fellow of Leadership New Jersey and was appointed adjunct instructor of the Department of Family Medicine at the University of Medicine and Dentistry of New Jersey, now Rutgers University. In 2012, he was appointed as a part-time Instructor at Rutgers University’s Edward J. Bloustein School of Public Planning and Public Policy, teaching both the Public Health and Health Administration majors.

— Buena Vida Media joins in celebrating the thirtieth-year anniversary of the EXPOLIT Conference, the global summit for Spanish Christian literature, music, and media, at the Miami Airport Convention Center (MACC), May 18 – 21, 2022 —
View More
Want more? Get LIBiz.us in your Inbox!