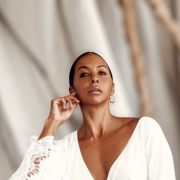 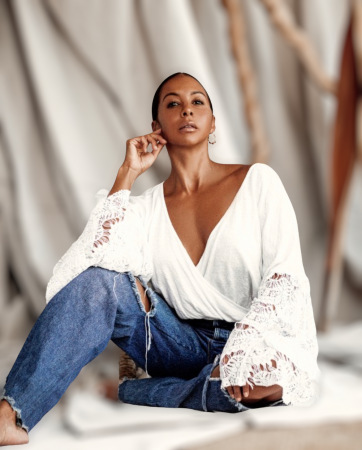 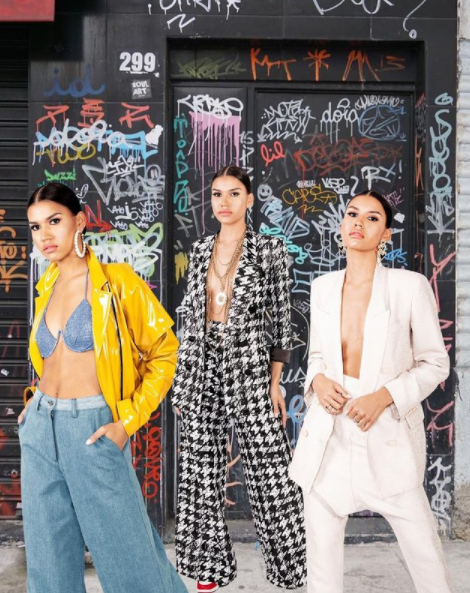 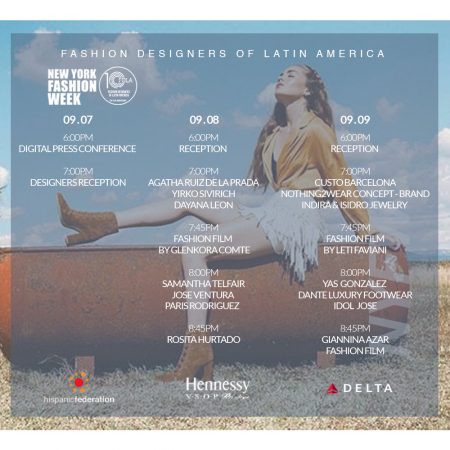 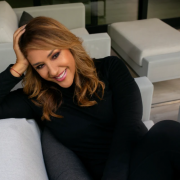 An accomplished designer with a career spanning 37 years, her work has been featured across the globe at events such as New York Fashion Week, Miami Fashion Week, and Los Angeles Fashion Week, and more and worn by stars such as  Eva Longoria, Lucia Mendez, Lupita Ferrer, Gloria Trevi, and Ximena Duque.

As a Latina designer and part of Fashion Designers of Latin America (FDLA), Rosita’s work draws inspiration from her cultural roots and heritage, blending Latin American tradition with modern fashion. 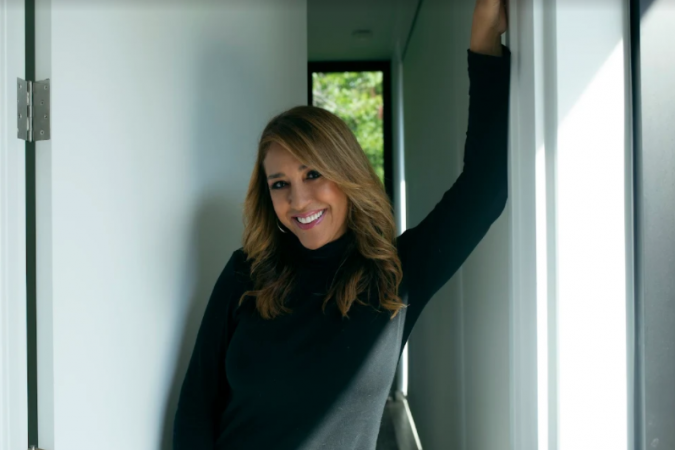 For as long as she can remember, Rosita has lived in the world of fashion and design. Born in Santa Cruz, Bolivia, her early years were filled with fabric and sewing as she watched her seamstress aunts work at their shops. Her mother was also a natural designer, creating homemade clothes for Rosita. With these teachers in her life, Rosita grew up watching and learning the craft of sewing and design that would eventually become her life’s passion.

“At seven years old I was making garments for my friends and putting on fashion shows on the patio at my home,” Rosita recounted.

This passion for fashion and design that began in childhood has since taken her around the world. At the age of 18, Rosita had the opportunity to travel to Brazil where she studied design at Yocanda Atelier in Porto Alegre Brazil. Later, she continued her studies in Paris, France at the Dominique school, before moving to London, England to study industrial pattern making. Finally, Rosita completed her education at the Art Institute of Fort Lauderdale in Florida, USA. 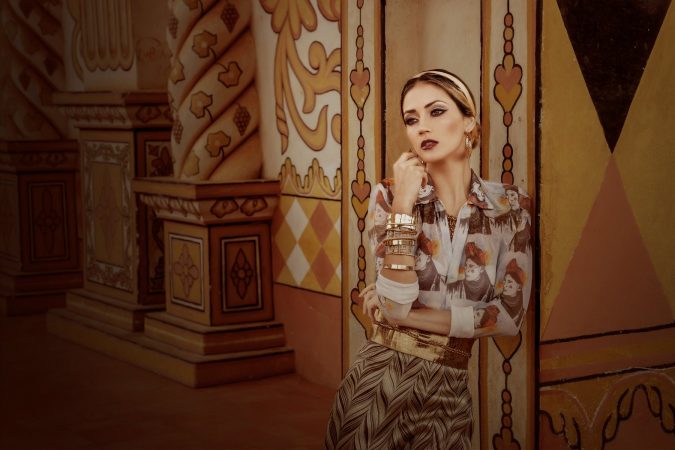 However, like most entrepreneurs who have found success, the road was not always easy. In her long career, Rosita has faced her share of challenges and obstacles but she has always persevered with a positive attitude overcoming anything in her way. As a young designer, she went from small business owner to successfully expanding to become a top business in Bolivia. Then she moved to the USA to start anew. Starting from zero in a new country where she knew nobody was an incredible challenge but also a crucial learning experience for the entrepreneur. She put in the work, began networking and promoting herself, doing interviews, anything she could to advance her business. Rosita’s love and passion for design fueled her with the perseverance to overcome her obstacles. 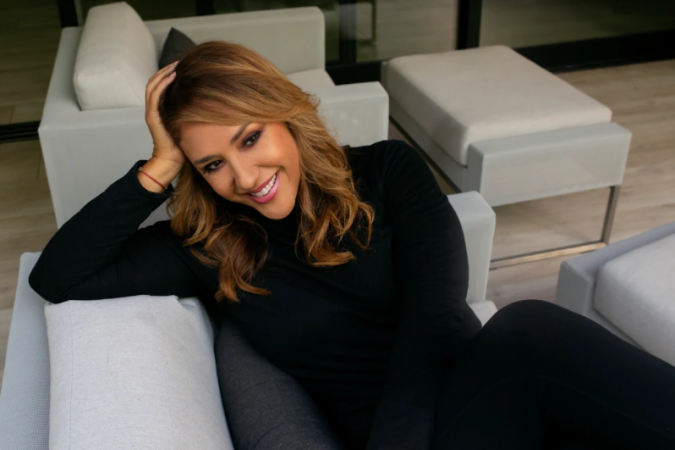 The lesson she learned, and that she hopes others will carry with them, is this: Know that nothing in life is easy, everything comes with sacrifice, but if you have a focus and drive and put in the work, you will get through anything and accomplish your goals.

One goal that guides Rosita’s work, is showcasing the beauty of Latin America through her garments. Rosita’s designs often blend vibrant colors and fabrics to create pieces that tell a story. Her collection, Viva México, is one example of this, blending urban casual with Latin American culture. The line was inspired by some of Mexico’s most important figures and monuments, bringing culture, history, and tradition together in stunning garments.

“It is an urban casual collection with a cultural purpose,” said Rosita describing the collection IxoyeUSA. “Inspired by four icons of Mexican history: Frida Kahlo, Maria Felix, Cantinflas and Juan Gabriel, and also in the architecture of Mexico.”

The collection, which includes tops, skirts, accessories, and more, was first presented during Bolivian Fashion Week in the Dominican Republic and is now available throughout various shops in Acapulco, Cancun and Playa del Carmen, as well as online through IxoyeUSA. 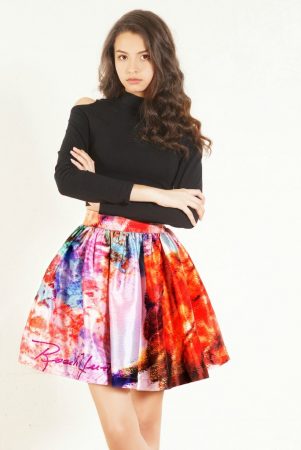 “I created the Ixoye line, a casual urban fashion with cultural purpose which is being recognized worldwide for its originality, to show the world through the clothing Latin American culture,” said Rosita on FDLA.co.

Her recent 2021 collection, featured at New York Fashion Week, is another symbolic collection. Named “Arcoíris” –Rainbow in Spanish– the collection is the perfect symbol for the year following a global pandemic. Focusing on vibrant and sparkling garments featuring the main colors of the rainbow, Rosita described the collection as representing “hope and renewal.”


As a seasoned designer, Rosita shares her advice with other young and aspiring women looking to venture into the vibrant world of fashion or longing to start their own venture.

The first step, she says, is knowing what you want. From a young age she knew she wanted to work with fabric and design like her aunts and mother. Find what’s calling out to you. Then, get an education in that field. Learn everything you can. Get practical hands-on experience as well. This is so important, especially in an industry such as fashion where there are so many avenues to pursue from designing to merchandising and event planning. Finally, follow your passion and love what you do. 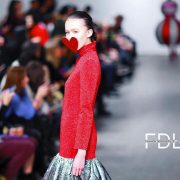 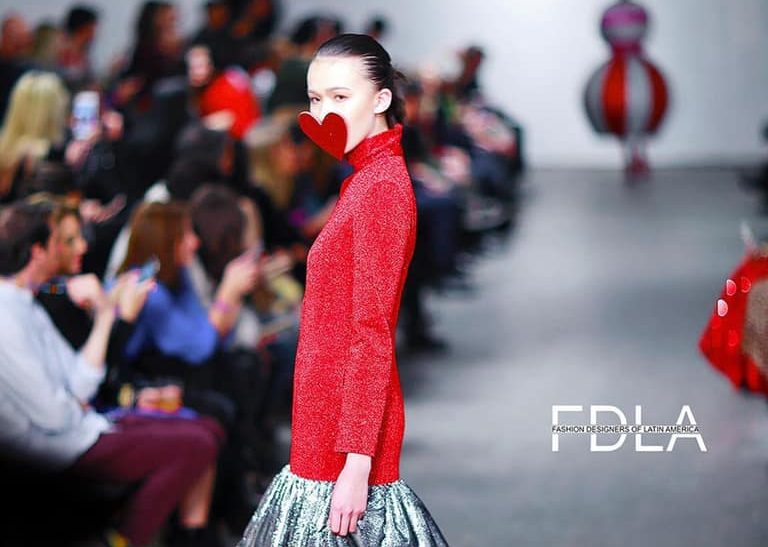 Fashion Designers of Latin America (FDLA) has announced the official schedule and participating fashion designers for the upcoming FDLA season during New York Fashion Week (NYFW) for its LIVE shows in September. The Fall schedule for SS/2022 FDLA shows will take place during NYFW at its new location, Lavan541, an iconic, exceptional and luxury event venue, located in the heart of Chelsea at 541 W 25th St, New York, NY 10001. The event is produced in adherence to New York State Health Guidelines. 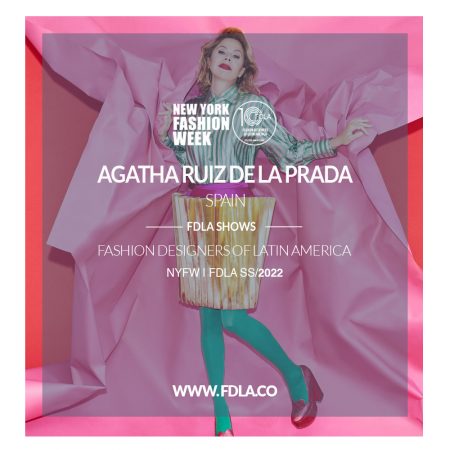 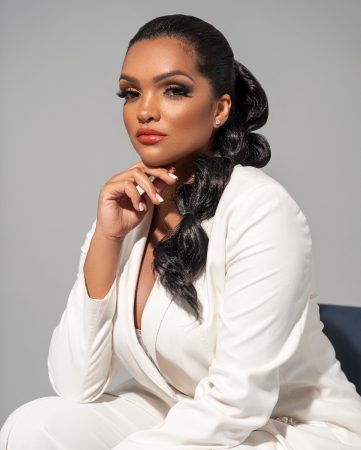 With current progress in the pace of vaccinations and the reopening of New York City, FDLA anticipates the week to feature a return to traditional in-person runway shows and a continuation of digital shows produced in adherence to New York State Health Guidelines. FDLA will require all participating staff, designers, models and all guests to be fully vaccinated.

“Anyone attending our shows will be asked to show proof of vaccination as we encourage and support the broader industry to follow suit and protect the wellbeing of our fashion community this season during the shows. We look forward to a strong coming back this fashion season and to celebrate the best of Latin American fashion in both physical and digital presentations,” said Albania Rosario, Founder at FDLA. 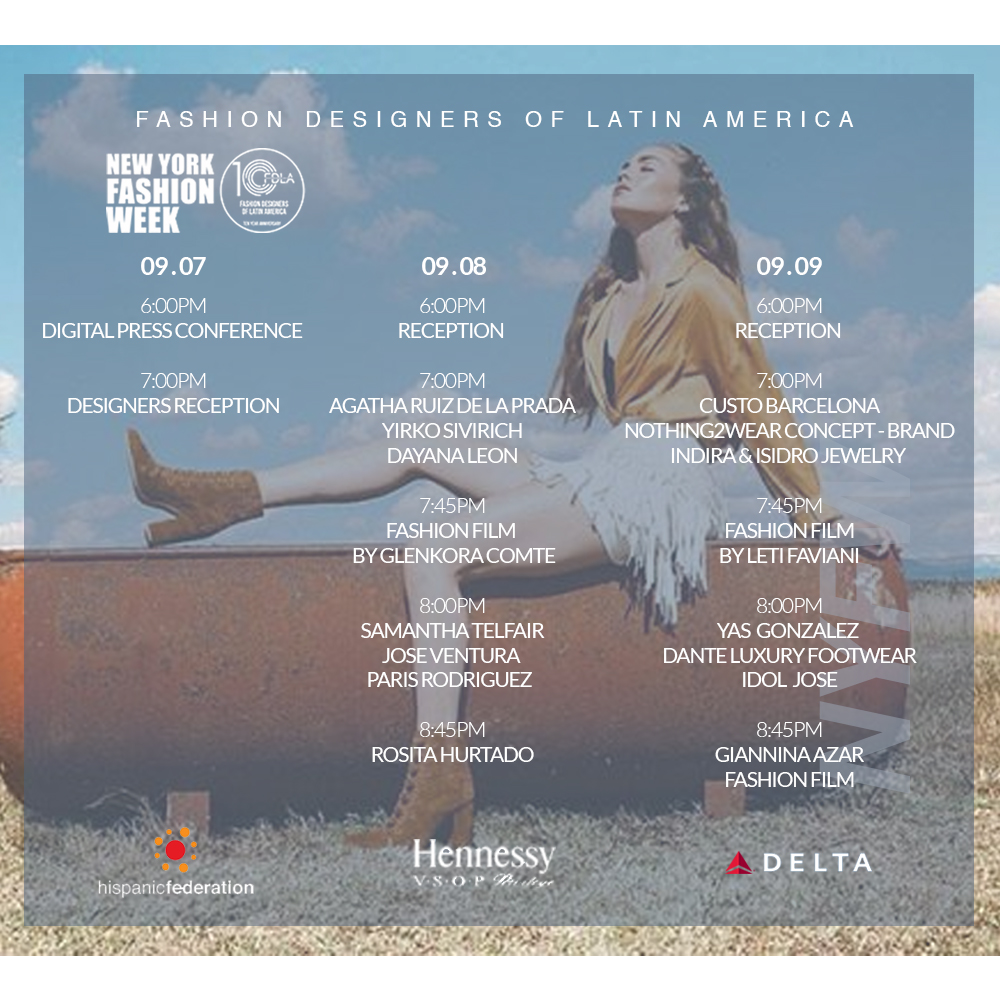 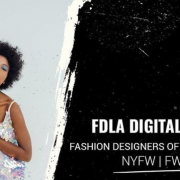 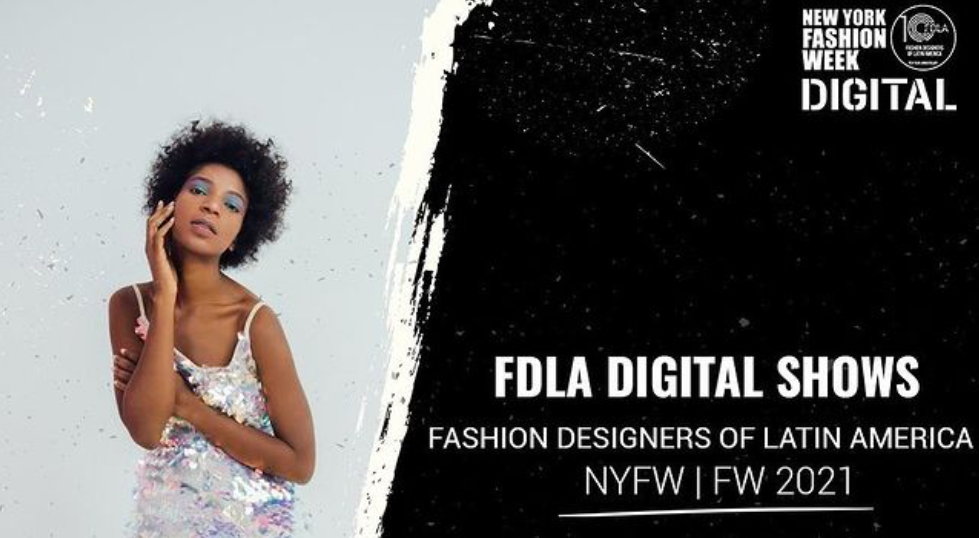 Fashion Designers of Latin America will be going digital for the second time at New York Fashion Week as lock-down endures. This past September, FDLA launched their first all digital show, turning to new innovative forms of media to bring their fashion shows to audiences across the world. Despite the pandemic, the show went on! The FDLA Shows during Fashion Week will continue its runway showcase once again through the FDLA Digital Platform.

Content that will appear on FDLA Digital site and all the platforms associated with the event will range from digital storytelling documentaries to a stream of new collections and digital look-books. The diversity of the initiative will be related to what designers are able to produce during the world crisis of COVID-19, and will also continue to reflect the new strain of branding, marketing, and communication that has taken hold during the pandemic. 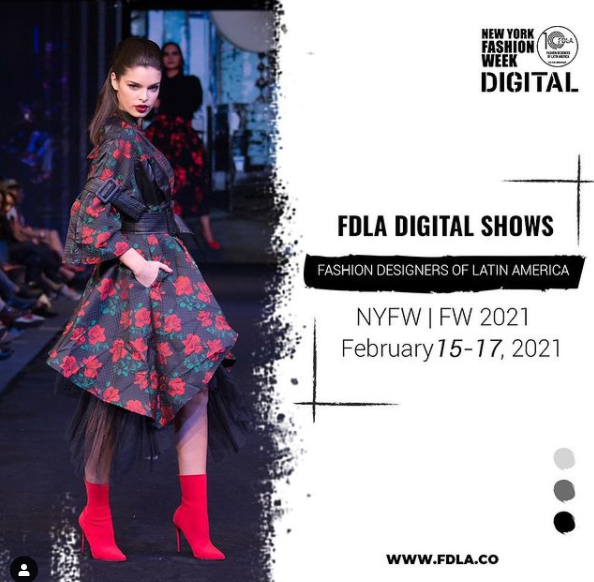 Instagram lives, social media posts, zoom conferences, and direct-to-consumer e-tail have only become more integral to fashion brands during this lockdown period, showing that direct engagement with customers and fans is more essential than ever.

The FDLA digital platform will also promote virtual showrooms, that will help connect brands with retailers, adding a business component to the week.

“It is essential to look at the future and the opportunity to change, collaborate and innovate. Many of our businesses have always embraced FDLA as a platform for not just fashion but for its influence on society, identity, and culture,” said FDLA CEO and founder, Albania Rosario. “The current pandemic is leading us all to reflect more poignantly on the society we live in and how we want to live our lives and build businesses when we get through this. The other side of this crisis, we hope, will be about sustainability, creativity, and products that you value, respect, cherish.” 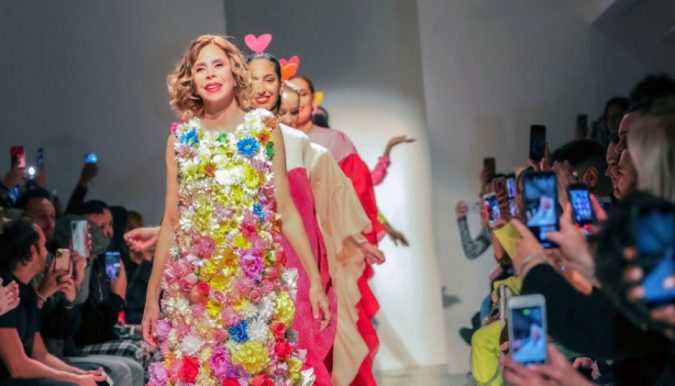 Are you in NYC? If you are, stop by & watch some of our best FDLA Digital moments in one of the largest screens of Time Square during NYFW | This Monday and Tuesday February 15 & 16 | Staring at 12 noon.

For more information and to watch live, visit www.fdla.co