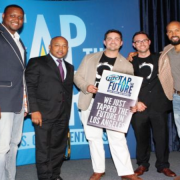 Are you a LIBizus startup or entrepreneur looking to take your business to the next level? Do you have confidence that your new idea is worth over $200K? Then Miller Lite Tap the Future is what you have been waiting for!

Miller Lite Tap the Future gives participants the chance to present original business ideas and compete for the grand prize while working with world-known business moguls like Daymond John from ABC’s “Shark Tank.” This year, in addition to business teams, they are also accepting “solopreneurs” to the program.

Beginning February 6, entrepreneurs ages 21 and over can submit applications up until April 10, 2015. Thirty semi-finalists will be selected to pitch their business ideas in Atlanta, Dallas, Los Angeles, Miami, Philadelphia and Detroit throughout July.

One business from each city will be chosen by a panel of judges to move on to the national finals and win $20,000. In September, the final six participants will compete in Chicago for a $200,000 grand prize.

“Miller Lite Tap the Future is the ultimate competition for entrepreneurs who want to be recognized and rewarded for following their true passion,” said John. “I encourage all entrepreneurs to apply for a chance to get their original idea out there and receive advice on how to take it to the next level.”

Two years in the works, Tap the Future has received over 4,000 submissions and provided $700,000 to fund original business ideas in all industries. Previous winners, Sean O’Brien and Evan Wray, were acquired for $27 million after creating Swyft Media, a company that creates stickers and emojis that are compatible with mobile messaging apps like Kik, Tango and Viber.

Miller Brewing Company began as just an idea in 1885 and has grown to be one of the top-five selling beers in the United States. Miller remembers where they started and are using this opportunity to give back to those who share the same passion for entrepreneurship.

“The original light beer exists because Frederick Miller followed his passion against all odds, so it is important for Miller Lite to support entrepreneurs who want to pursue theirs,” said Steve Canal, MillerCoors manager of community commerce and partnerships. “Not only does Miller Lite Tap the Future offer entrepreneurs the chance to interact with top business experts like Daymond John, but it also provides the tools and funding resources to help bring great ideas to life.”

These are John’s three tips to be a winner:

“I often speak about the importance of mentors. These days I’m usually the one doing the mentoring but I wanted to use this week’s blog to give people some insight into the people who changed my life through their mentorship. Mentors can be people who come into your life for a brief period or those who stick around forever. My friend, and current mentor Jay Abraham, who I’ve mentioned many times in the past, recently shared a study with me. It found that startups that have helpful mentors, and learn from startup thought leaders raise 7x more money and have 3.5x better user growth. Mentorship is what allowed the successful companies to focus, not take funding too soon, and scale at a good pace. I’m thankful for all of the mentors who have helped me throughout my career and life,” Daymond John says on this article “Mentors who changed my life.”

“When I’m on the road speaking, or really anywhere out in public, people often approach me to discuss their businesses. More often than not, they ask me for something, ‘Can you help me get distribution,’ ‘Can you help me with my next round of funding,’ etc. While it’s good to approach the people whom you’d like to work with, this is not the best way to do it, he says in his article “Be a Go-Giver, not a Go-Getter.”

“The best way to approach these people is to OFFER services rather than ASK for them. The people I end up working with are the ones who come up to me and say, ‘I’d love to work with you. How can I help you with what you have going on?’ Or ‘I do such and such service, I’d like to offer it to you free of charge so you can see the quality of my work.’ The next time you’re at a networking event, give the go-giver approach a shot, I think you’ll be pleasantly surprised by the results,” he concludes.

Miller Lite Tap the Future judge Daymond John knows a thing or two about being successful. In this video, he shares three tips to keep in mind when trying to get ahead. He advises that you should watch what you say on social media, keep your appearance in mind and learn from everyone you meet.

Click here to watch the video with Daymond’s tips on getting ahead!