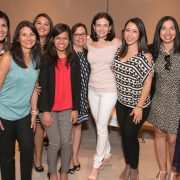 Latinas Equal Pay Day is not a day of celebration but a day of action. Blog contributor Corine Sandifer covers thoroughly the facts on this important issue and the actions to be taken to close this 47% pay gap that hurts Latino families, and follow Latinas into retirement. Also, it hurts the general market as Latinas make 82% of household decisions -hence diminishing their opportunity for financial planning, sending their children to college and making other important purchases like homes purchases and health coverage. The gap also follows them into retirement.

November 1 is a recognized day for women like me. It’s Latina Equal Pay Day. A day to bring awareness to this inequality in the U.S. As the host of Rising Stories Podcast and Regional Leader for Lean In Tennessee, I want to share some data today from Lean IN.org on the pay gap for Latina women and the implications it has had on our futures and our families. Please read the data, let it sink in and then read the call to action.

Latinas have to work all of 2017 and until this DAY in 2018 to catch up with what white men earned in 2017 alone. Even when you take factors like education, experience, location, and occupation into account, a large part of the pay gap remains. According to the Economic Policy Institute, Latinas are paid less than white men in the same jobs. Latinas are paid $0.53 for every $1 that white men earn, leading to a pay gap for Latinas of 47%. To understand why the pay gap is a crucial issue for Latinas and families, it helps to understand how the pay gap is calculated. The pay gap is calculated by gathering the median annual earnings for full-time year-round workers and breaking it down by race-ethnicity for the given year. Then, the median annual earnings for Latinas are taken as a percentage of white male earnings.

When Latina women are paid less it impacts their ability to buy groceries, pay for childcare, afford rent and tuition… all the costs that go into supporting a family. 47% counts for each and every Latina facing this pay gap but also for their families and dependents. Lower earnings for Latinas means less money for their families, especially since many Latinos are the main breadwinners for their household. 85% of Americans think it would be a major problem or crisis if they earned 40% less money. Yet compared to white men, Latinas face a larger pay gap every day. This amounts to over one million dollars lost over the course of a typical career. This also translates to nearly 4 years of groceries!

You can join our circle here or by visiting Lean In org circles to find a circle and network near you.

This article was also published on LinkedIn On October 31. 2018