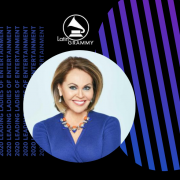 This year’s event will be hosted by two-time Latin GRAMMY winner and GRAMMY nominee, singer, songwriter and actress Erika Ender, who was also one of the 2017 Leading Ladies of Entertainment.

“Every year, not only am I amazed at the group selected to receive the Leading Ladies of Entertainment distinction, but also proud to celebrate and honor such distinguished leaders who have forged paths for so many,” said Gabriel Abaroa Jr., Latin Recording Academy President/CEO. “These four successful women are passionate, driven and extraordinarily inspirational. We are grateful for the positive impact they have on our communities and the example they set for the next generation of leaders, demonstrating that anything is possible.”

The 2020 Leading Ladies of Entertainment recipients

Selena Gomez is a singer, actress and producer. As a pop vocalist and recording artist, Gomez has achieved tremendous commercial success, selling more than 145 million singles worldwide and garnering over 25 billion global streams. “Lose You to Love Me,” the first single off her critically acclaimed album Rare, available via Interscope Records, marked a historic moment for the singer as she landed her first No. 1 on the Billboard Hot 100 chart. As an actress, she starred in Harmony Korine’s “Spring Breakers,” the Academy Award-nominated film “The Big Short” opposite Brad Pitt and Ryan Gosling, and “Fundamentals of Caring” alongside Paul Rudd. Gomez also serves as an executive producer of the hit Netflix original series “13 Reasons Why.” She has used her platform to speak out on social causes throughout her career and went on to executive produce the critically acclaimed Netflix docu-series “Living Undocumented,” which created much-needed exposure and discussion regarding the polarizing issue of undocumented people living in the United States. In addition, Gomez serves as executive producer of the new HBO Max cooking show “Selena + Chef” as well as the recently released feature film “Broken Hearts Gallery.” She will also be the executive producer and will star, along with comedy legends Steve Martin and Martin Short, in the upcoming Hulu series “Only Murders in the Building.”

As the passionate, soulful voice of Colombia‘s Latin GRAMMY-winning and GRAMMY-nominated trio ChocQuibTown, Gloria “Goyo” Martínez has become one of the most rousing and conscious lyricists in Latin music. The Afro-Colombian singer, rapper and composer has also been championing more inclusivity and equality since the start of her career. Born in Chocó, a department in Colombia nestled along the Pacific coast, Martínez grew up in a vibrant, musical household. Her favorite track growing up was “Goyito Sabater” by El Gran Combo de Puerto Rico, which endearingly earned her the nickname Goyo. With ChocQuibTown, Goyo has navigated spaces in urban, alternative and tropical genres, while always representing their love of Colombian folklore. This ability to maneuver seamlessly across musical styles has linked them to noteworthy collaborations with artists such as Tego Calderón, Farruko, Carlos Santana, Carlos Vives and Zion & Lennox.

Miami native Angela “Angie” Martinez has been working in the music business for the past 20 years. She has garnered experience working in-house at BMG US Latin, Universal Music Publishing Group and EMI Music Latin America. In addition to her corporate experience, she has worked independently with top artists, songwriters and producers such as Mike Bahía, Claudia Brant, Camilo, Mau y Ricky, Luis Fonsi, Ricardo Montaner, Pitbull and Ozuna, to mention a few. Billboard magazine has recognized Martinez as a “Top Music Attorney” for two consecutive years and she recently received the 2020 “Wonder Woman of Latin Music” award from the Latin Alternative Music Conference.

María Elena Salinas is an award-winning journalist and author. She joined CBS News as a contributor in 2019 and previously served as co-anchor of Univision’s evening news program for more than 30 years. Her work has earned the top awards presented in broadcasting, including multiple Emmys, a Peabody, Gracie Awards, the Edward R. Murrow Award and the Walter Cronkite Award for Excellence in Television Political Journalism. A versatile and bilingual journalist, Salinas has interviewed every U.S. president since Jimmy Carter. She was one of the first female journalists in wartime Baghdad, participated in the 2004 bilingual debate on Hispanic issues and in 2007 co-hosted the first Democratic and Republican presidential candidate forums in Spanish for Univision. Salinas is a founding member of the National Association of Hispanic Journalists and for over two decades has provided dozens of journalism students with a scholarship in her name.

The 2020 Leading Ladies of Entertainment ceremony will take place virtually tonight, Nov. 17. The annual event is not only an opportunity for The Latin Recording Academy to recognize and highlight the work of incredible women, but also serves as a platform to raise funds for the Latin GRAMMY Cultural Foundation.  A portion of the proceeds earned from corporate sponsorships will go toward a scholarship for a young woman interested in studying music.

To help support the event, TURESPAÑA and Mastercard will join forces with The Latin Recording Academy as sponsors to honor outstanding women. Following the event, Mastercard will host curated content on priceless.com recapping the Leading Ladies celebration and the importance of women‘s success in the entertainment industry.