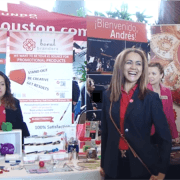 A major announcement regarding the Houston Hispanic Chamber of Commerce (HHCC) commitment to encourage and support Latino participation in next year’s electoral process will take place at their 22nd Annual Luncheon & Business Expo this coming Thursday April 9 at the Hilton Americas Downtown 1600 Lamar Street in Houston.

The sold-out event, which will welcome 70 exhibitors and over 1600 visitors, is the largest business luncheon in the region, and its influence goes beyond the confines of promoting and advocating for Hispanic businesses.

“This year, marked as an electoral year for Presidential and Mayoral electoral campaigns, the Houston Hispanic Chamber of Commerce has positioned itself to support the electoral process motivating and encouraging people to register to vote,” said Dr. Laura Murillo, President and CEO of the chamber.

According to The City of Houston demographics, Latinos in the Houston area account for almost 1 million, representing 44 percent of the local population; however, said Dr Murillo, only 10 percent of Hispanics show up to vote during election years.

“We are launching our effort through our chamber’s media platform, which covers both the Spanish and English-speaking Latino population. This is not a partisan move; it is a concerted effort to propel Latinos to exercise their right to vote,” Dr. Murillo said toLIBizus.

“It took us a long time to convince mainstream media to become our strategic partners but now they recognize the power of Latinos in the regional economic development,” she said. “Hispanics are a very diverse population, from country of origin to socio-economic status. We need to reach them all, and my commitment as the HHCC President and CEO is to encourage Latinos to be treated with the respect and professionalism we deserve,” she added.

As much as this effort seems necessary, it might also seem distant from the chamber’s traditional objectives, which is to promote and advocate for the 90,000 Hispanic businesses in the region.

“Not al all,” Dr. Murillo said, “Everything is related to business. For instance, the approval of the Export-Import Bank charter, now due in July, might greatly jeopardize the livelihood of many businesses –and the jobs they create– that depend on the agencies’ funding,” she explained.

The vision of this influential Latina, who has been recognized as “Most Powerful & Influential Women in Texas” by the National Diversity Council; “Woman of the Year” by Success Magazine; and the International Leadership Award by Texas Women’s Empowerment Foundation, is simple.

“Without the due political clout and representation, Latinos cannot find economic opportunities. Latinos are a silent voice and we need to empower our community in topics from comprehensive immigration reform and tax reform to energy policies, all topics important to the United States of America because they all relate to business,” she explained.

During the Annual Luncheon and Business Expo, the chamber creates networking opportunities by connecting business owners to the corporate world. Seminars and workshops will be offered throughout the day by sponsors such as Port of Houston Authority, which will explain how to conduct business to and with potential vendors.

“The event has grown from a small luncheon to a full-day activity and business expo, very well-attended by large corporations’ CEOs, elected officials, business owners and also emerging leaders we recruit and prepare through our Foundation’s Emerging Leaders program,” Dr. Murillo said.

She has been the HHCC President and CEO for eight years but was previously involved with the chamber for 20 as board member and community leader. The organization has grown from a small group of members to the largest Hispanic chamber in the country, Dr. Murillo added.

“As the daughter of immigrants, it has been a personal privilege to help develop a strong Latino community in Houston and its region. Many important goals have been accomplished but certainly there is room to do more,” she concluded.