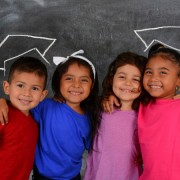 “Economic and political power among Hispanics must be matched with education power,”  Donado said. She continued to explain how research and experience have consistently shown correlations between educational attainment and success, such as the improvement of personal and public health and overall quality of life, and the opportunity for acquiring wealth.

Education also strengths communities and societies and promotes harmony and collaboration among people of different backgrounds and cultures. Donado drew upon ETS and national reports as well as her own experiences to illustrate the positive benefits of educational attainment and the remaining challenges.

“Those who neglect the potential contribution of Hispanics to our nation, those who do not support equitable access to educational opportunity for Hispanics, and those who oppose documenting the undocumented do so at their own peril. We often point to our growing numbers and assume that with that growth comes economic and political power. But such power must be won. It will not be handed to us. We must fight for it. Economic and political power must be matched by education power!”

A “Nuyorican,” (New York City-born Puerto Rican), she is the CEO and SVP of a $1.5 billion nonprofit organization that strives to advance quality and equity in education for people worldwide by creating assessments based on rigorous research. Educational Testing Services serves individuals, educational institutions and government agencies by providing customized solutions for teacher certification, English language learning, and elementary, secondary and postsecondary education, and by conducting education research, analysis and policy studies.

She has an extensive academic background in HR, with many years of experience in the corporate and nonprofit worlds. Leading a staff of over 400 employees in an organization that employs more than 3,000 people and administers 50 million tests per year in 180 countries, Donado has created a sustainable talent brand, “Learning for Business Results.” She also spearheaded ETS’s initiative to address the needs of the nation’s English learners.

Donado believes there is a myth about Hispanics not caring about education, but in fact, education tops the list of Hispanic priorities along with economic opportunity. “So the challenge is to move our communities and our nation from the realm of `possibilities’ into the realm of `probabilities.’ Our motto should be `mission possible’.”

“Our society is changing faster than our capacity to keep up with the changes,” Donado concluded. “Let us not react to the changes around us, let us prepare. Let us shape those changes in a manner consistent with our numbers. Education, too, is evolving. And we Hispanics cannot be mere spectators. We must be players. We must move from doubts and uncertainties, to assured progress, along pathways with built-in and fail-safe mechanisms.”

If Latinos age 18–24 attended and graduated from college at the same rates as non-Hispanic Whites, the following benefits would incur by 2015:

Despite many gains, Hispanics continue to lag in key areas including:

To create progress, efforts should include: