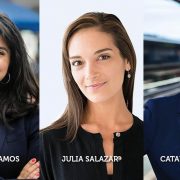 Three Latinas in New York defeat candidates of the Democratic Party traditional machinery, spreading fire around the country for other progressive candidates to step up.

Three Latinas in New York, all of them newcomers with Colombian roots and younger than 35, planted a new, progressive flag in famously corrupt Albany, the capital of New York State. They beat the powerful Democratic Party machine and some entrenched Albany insiders, and became candidates to the state legislature. In a political landscape like New York’s, where Democrats are an overwhelming majority, a victory in the primaries makes the coming general elections a mere formality. 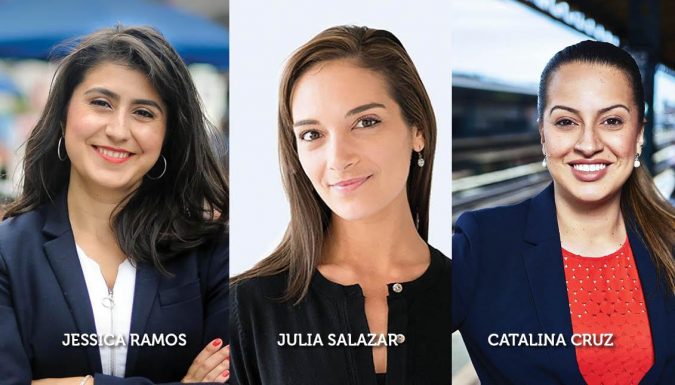 While experts debate if the Democratic Party has become a radical leftist organization – a really quaint notion—or if simply political expediency and public pressure to counteract Donald Trump’s horror show are forcing it to act more “progressive” – as Gov. Andrew Cuomo did in order to secure a third term— while remaining at its core as reliably a bulwark of the status quo as ever, Jessica Ramos, Julia Salazar and Catalina Cruz, were making history.

“I am proud to be the Democratic nominee for the 39th Assembly District to represent Corona, Jackson Heights, and Elmhurst,” said Cruz, who came to the U.S. from Colombia at the age of nine. A former Dreamer and now an attorney, she has been a U.S. citizen since 2009. Hardworking and charismatic, Cruz defeated the incumbent Ari Espinal. On November 6 she will become the first Dreamer elected to public office in New York State.

“You have heard me say many times that this campaign belongs to you – the people of our community – and together, we stood up for working families, immigrants, tenants, seniors, and our LGBT neighbors,” Cruz said in a message to her supporters.

Clearly demographics had much to do with the women’s victories. Cruz and Ramos grew up in Queens and Salazar in Brooklyn, counties with large Latino and immigrant populations that voted in much higher numbers than usual. Add to that a growing awareness in the Latino and immigrant communities about the urgent need to participate in the electoral process as the way to bring about changes in their lives and reject the toxic anti-immigrant environment that has festered under president Trump’s racist rhetoric and policies.

“We said no to corporate funding and we rejected negative campaigning. We embraced a real plan of action with a vision for a better future,” Cruz added. “With your help, we knocked on more than 30,000 doors and connected with an even larger number of voters.”

Jessica Ramos, who won the nomination to the 13th Senate District (East Elmhurst, Jackson Heights and Corona) by defeating long-term Albany fixture José Peralta, was born in Jackson Heights to Colombian parents. She is not a complete novice in the world of New York politics.

“This is the beginning of a new chapter for our communities, under new leadership and it is an opportunity to organize ourselves in the struggle for issues such as rent reform and access to universal medical care,” said Ramos, who until recently was mayor Bill de Blasio’s Deputy Press Secretary for Community & Ethnic Media. Her message to Democrats must be considered by the party bigwigs: “We have to create a new (Democratic Party) that reflects the diversity and the values of the working people.”

Like Alexandria Ocasio-Cortez, Julia Salazar, 27, whose parents are Colombian (father) and Italian (mother) is a democratic socialist. She will become the state senator representing Brooklyn District 18 after defeating Martin Dilan with the support of young voters. Dilan had spent 16 years in Albany.

“This is a victory for workers,” was Salazar’s message to her enthusiastic followers.

The three women are young, energetic and smart, and have expressed their eagerness to begin making good on their promises. It won’t be easy. In Albany they will be entering a veritable house of tricks.

Then again, Salazar, Ramos and Cruz, are an essential part of the only possible future for the Democratic Party. And as such, they transcend Albany and even New York.

This article was published on AL DIA News on September 18, 2018.

Author: Albor Ruiz
I cover political and social issues directly affecting mostly Latinos in the U.S. and Latin America.
A long-time former editor and columnist for the New York Daily News and El Diario, whether writing for English-or Spanish-language media, my journalistic mission has been to provide a voice for those whose stories often go untold by the mainstream media, a mission I enthusiastically continue to fulfill at Al Día News. A former National Association of Hispanic Journalists Region II Director and member of its National Board, in 2003 I was inducted into the Association’s Hall of Fame. Born in Cuba, I have lived in New York City since 1980.
https://latinasinbusiness.us/wp-content/uploads/2018/09/three-latinas-NYC-e1537362823688.jpg 450 789 LatinasinBusiness.us Team https://latinasinbusiness.us/wp-content/uploads/2021/08/flyer_panelist-19-300x140.png LatinasinBusiness.us Team2018-09-19 09:20:142018-09-19 15:26:26Three Latinas in New York defeat Democratic encumbered candidates