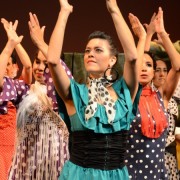 When Claudia Campbell-Matland contacted me via email regarding OUR LIBizus promotional feature, she asked me if the Alborada Spanish Dance Theatre’s half-Spanish Executive Director Eva Luna and the “Spaniard-want-to-be” marketing director – herself – would qualify for the offer according to our editorial guidelines.

“Since childhood, I have always loved flamenco and Spanish dance, seeing Jose Greco perform on TV. I took Spanish dance classes in Princeton after I finished graduate school at Rutgers University. Never once did I imagine growing up that I would ever become a dancer on stage, nor be doing the marketing & fundraising work I now do to help the dance company,” Claudia said.

I have had the opportunity to see the dance theatre company perform at the Middlesex County Regional Chamber of Commerce (MCRCC) Hispanic Business Expo (Feria de Negocios Hispanos de Central New Jersey) – organized annually by the chamber’s Hispanic Business Council. The dance group’s passion and professionalism had caught my attention and I definitely wanted to feature this effort to promote, expand and enlighten Latinos and Americans alike around the culture and artistic expressions of “la Madre Patria.”

Moreover, Alborada has a unique niche in that it explores the rich diversity and complexity of Spain’s interactions with other world cultures. Along the history of the Iberian Peninsula, the region has received influences from a number of traditions including Indian, Jewish, Latin American, Arabic, African-American, and Irish cultures. Their group productions include worldwide dancers, performers and musicians.

The art of promoting art

Eva giving a lecture on the history of Flamenco & Spanish Dance on August 21, 2013. With Jim Duffy, president of the Rotary Club of Elizabeth, NJ.

“Alborada has been blessed with wonderful board members over the past several years. The current Board of Trustees consists of 5 people (a lawyer, a dance educator, a school teacher, a sales and marketing entrepreneur, and a director from Rutgers University), who are very committed and engaged with the mission.

Several committees and volunteers help implement tactics and strategies including Marketing and PR, Development and Fundraising, Programs, Finance and Education.

“The Education Committee is in charge of programming for the company’s educational offerings to K-12 school assemblies, lecture-demos for libraries and museums, and other educational events. This committee has been recently revitalized, and will be implementing new outreach methods to increase presenters for these programs, as well as reviewing and revising our educational materials,” Claudia explained.

As a dance company and an ethnic cultural arts organization in New Jersey, Alborada faces the challenge of standing out among numerous dance companies in the major northeastern cities such as New York City, Washington DC, Philadelphia, and Boston. In New Jersey, there are neither major dance centers nor home theaters for dance companies.   A few dance companies have relationships with colleges, but most are not in residence at colleges or universities.

“The constant struggle of arts non-profits resides in competing for donors in the same pool with other non-profit organizations serving more critical needs such as disaster relief, homeless and abused women and children, and others,” Claudia shared. “The NJ dance companies are fortunate to have a wonderful dance service organization, Dance New Jersey, a major funder in the Geraldine R. Dodge Foundation, which has funded Alborada for several years, and Middlesex County Cultural and Heritage Commission, also funding Alborada for 20 years. We are grateful for the NJ State Council of the Arts, which provides funding in part to many dance companies through their Home County cultural and heritage commissions.”

Running an arts non-profit, while very rewarding, is very time-consuming, a full-time job in itself, as Eva notes, “It’s blood, sweat and tears, creating miracles on a shoestring, but I will never give up, it’s in my soul.” Requirements from funding organizations to obtain grants are becoming more intense, applications are getting longer every year and require more work and documentation. Some funding organizations have changed their funding focus, which has resulted in a loss of funding the company had in the past.

“Due to Eva’s vision, the dance theatre company continues to reach new artistic heights. However, the company’s administration needs to progress as well to support her vision. It needs to diversify and increase financial support to the levels needed to bring on paid staff and obtain an office and studio space. These are our immediate challenges for 2015,” Claudia concluded.

The Caracoles is a joyful Flamenco dance influenced by Cuban rhythms, and introduced in Madrid in the 19th century by the bullfighting characters. Danced here with the bata de colas and abanicos, Eva Lucena in the middle with the Alborada ensemble. 2014 Flamenco Tap Happening show. Photo credit: Michael Welch, 2014.