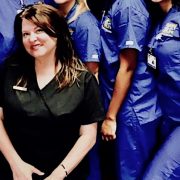 Yolanda Evgeniou is the owner of Paraprofessional Health Careers, and provides curriculum, course materials, and is the instructor for non-credit programs for individuals striving to enter Allied Health fields. For over 20 years she has worked as an educator in her community, helping individuals achieve their career goals and dreams. 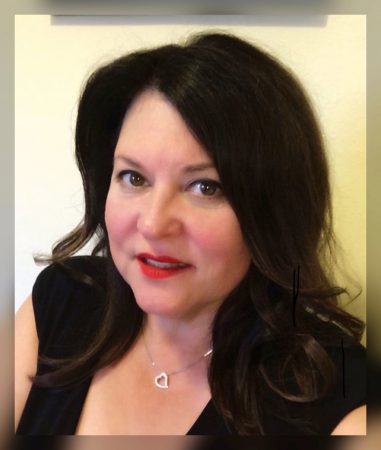 How care for her community lead to launching a successful business

Yolanda began her business in 1999 when she saw that there was a need for affordable education and training in the Paraprofessional Health field.

“I decided to start certificate programs because many people that I had come to meet could not afford college and were struggling to pay bills or even provide food for their families,” says Yolanda. “I knew that training them in ‘Medical Tech’ programs would lead them to employment and certification costs less money and provides a greater return on investment!”

Born in Newark, New Jersey to a humble family, Yolanda knew what it was like to struggle. She worked not one, not two, but three jobs just to start her business. She did not have the advantages of money starting out, but she worked hard to make her dreams a reality because she wanted to help others.

On her career journey, Yolanda has faced many obstacles as well. From humble beginnings and struggling to access capital to facing racism and discrimination. Many companies also stole her ideas, profiting off her, and this was a very painful experience. But through it all, Yolanda never gave up. Her intentions and desire to help others were always selfless and rooted in her deep love and care for her community.

Yolanda has a big heart. As an educator and community member she understands the struggles people face and always strives to help wherever she can. 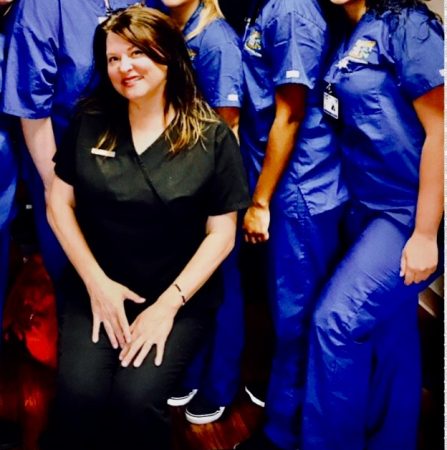 “I truly care about the community,” she says. “Many times I would train students for free and help place them in doctor’s offices or hospitals. I am simply a humble lady that understands struggles in communities.”

Now, after over 20 years, Yolanda’s curriculum has helped countless individuals start their careers in the Paraprofessional Health field. The curriculum awards certificates in the areas of: Medical Assistant, Patient Care Technician, Phlebotomy Technician, and Medical Administration.

“Believe you have the right to become anything!”

In addition to her work as a healthcare professional and educator, Yolanda also writes children’s books in her spare time. She enjoys telling fun, educational stories with a spark of magic!

Her first book, Gavin and The Moon, explores the topic of Cultural Diversity for children. As someone who has faced racism and discrimination, Yolanda knows just how painful it can be. The story teaches children universal acceptance of each other’s race, religion, and cultures by showing how the Moon’s peaceful glow shines the same to all of us across the world. To the Moon we are all equal.

This lesson is one that Yolanda carries with her everyday. 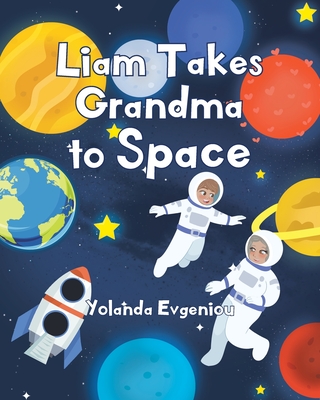 She believes reading to children about different cultures, races, and even gender identities can open their minds and hearts, teaching them to be kind, accepting, and empathetic people.

Yolanda’s latest book, Liam Takes Grandma to Space, follows the exciting adventure of Liam and his grandma as they float across space and discover the eight planets that orbit around the sun. This educational story teaches children about the wonders of outer-space in a fun, colorful tale.

In all her endeavors, Yolanda strives to educate and guide young minds on their journeys through life, whether that be career training for future healthcare professionals or guiding young children across the globe and through the stars with imaginative stories. As a true educator, her goal is to help her students achieve their dreams and guide them toward their goals.

“My favorite quote by Martin Luther King Jr. is: Intelligence plus character, that is the goal of true education,” she says. “Believe that you have the right to become anything or anyone! And do not allow racism to stop you from becoming successful. Do not allow it to destroy your inner soul and peace of mind!” 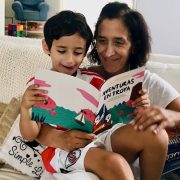 Maria Victoria Sanchez is the creator and founder of Libro Magico Amarillo, a publishing company that creates personalized Spanish children’s books. Her books offer a mix of adventures and educational content that keep children engaged and reading longer, all while playing and having fun. Her books also serve as a tool for parents raising bilingual children, helping them foster a love and appreciation of Hispanic language and culture in their children. 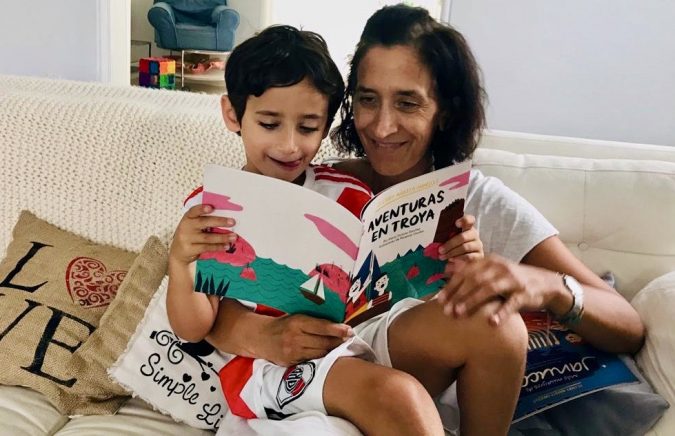 Rediscovering the magic of stories

Libro Magico Amarillo officially launched in June of this year, but before that it spent 30 years simply being a dream in Maria’s mind. Creating Spanish children’s books was something she always thought of doing but procrastinated for many years, never knowing when was the right time to start. As a child, her mother instilled in her a love for reading and writing. Stories were magical and they became her greatest passion as a child. However, as she grew up, the magic spark receded in her mind. She let her dreams of telling stories fall away to a small corner of her mind where she would think of the idea from time to time but never act on her dream.

Before Maria would make her book business a reality, she first spent a good portion of her professional life having a successful career in the corporate world. Born in General Roca, Rio Negro, Patagonia, Argentina, Maria earned her degree in law. After graduating from law school in Argentina, she then came to the U.S. to do her Masters at Harvard Law School.

“I worked for big names in the corporate world including Greenberg Traurig, JP Morgan, and Mastercard. I got to live in different countries and travel extensively. But with the arrival of my two children, I realized that I was no longer interested in corporate life or business trips,” says Maria.

With her priorities shifted, Maria did some soul-searching to figure out what she wanted to do next with her career. She was searching for the magic spark. She soon found it in one of her earliest loves: stories. Maria realized that happiness for her also meant doing things that had a social impact. Libro Magico Amarillo would provide her with the platform to do just that.

Maria officially began working on making her dream a reality a year ago. At the time she had no knowledge of the industry, e-commerce, or digital marketing. It was completely new territory. 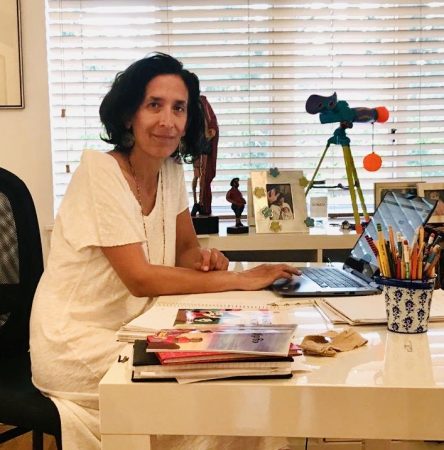 “I had to start from zero,” she says, “but I decided that it was now or never and that I did not want to die without having tried to build my own business venture.”

Over the next year, Maria met with illustrators, printers, writers, and delved deep into the amazing world of book publishing. She faced some obstacles along the way, from not having access to lines of credit or a name in the industry to other entry barriers such as the high cost of marketing and having to make tough choices because of limited funds. Then of course there was the Covid-19 pandemic which threatened to halt the process and launch of Maria’s dream venture.

“The pandemic was not going to stop me,” says Maria. “It has certainly created hiccups, but also it has proven to be an opportunity for connection.”

Launched on June 6, 2020–what would have been the birthday of Maria’s late mother–Maria’s personalized Spanish children’s books have served as a bridge to connect family and friends during the pandemic. Family members can gather together virtually to read together and share stories, all while helping to foster a child’s bilingual education and growth.

Sharing the magic with others

Maria’s driving force through the struggles was her love for books and her desire to make an impact. One of the ways she’s using her platform to help others is by donating a percentage of all new profits to JAFCO, an orphanage that is doing great work for children. The other main area of impact for Maria is in education and sharing the magic of stories with others while also helping parents raise bilingual children and foster an appreciation for Hispanic language and culture. 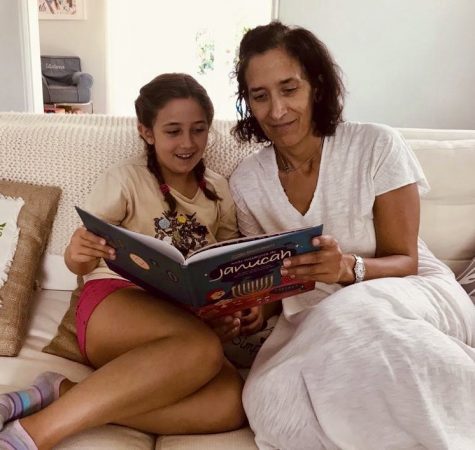 “As a mom, immigrant, raising bilingual children, I bring a new angle to children’s books, focusing on the Spanish language, with stories thought and written in Spanish and not just translated by AI,” says Maria.

Her books bring Hispanic values and culture to bilingual children and act as an educational tool for parents who want to instill a love and appreciation for their home culture in their children.

Libro Magico Amarillo’s books keep children engaged and by making the children themselves the protagonists of the stories. The personalized Spanish children’s books allow parents to customize the books with their child’s names and each book is printed on demand so that each child receives a carefully designed adventure personalized just for them!

The books also cover a variety of topics including history and geography, which allows children to learn as they play.

Recently, one young reader shared a video with Maria of her reading experience. In the video, the 3 year-old and her mom were reading Adventuras en Troya together for the fourth time and she was so excited and engaged, asking questions about the story.

“The little one was asking her mom, “Tell me about Menelao!!!” He was the King who was married to Elena, who was kidnapped by Paris, giving origin to the Trojan war. That just made my day,” says Maria.

Most 3 year-olds are not asking about characters from ancient Greek stories, which just shows the amazing power of reading and storytelling. Libro Magico Amarillo’s books immerse children in fun, educational stories and take them on adventures all over the world–literally, since the books characters are personalized based on the child.

Finally, Maria is also using her platform to uplift other entrepreneurs. During her journey, she had many supportive people to uplift her along the way and she wants to pay it forward.

“I want to be an advocate for the need to provide more support to local business owners and entrepreneurs who do not have access to the same loans or health insurance as others.”

Maria knows how beneficial it is to have a strong support system and mentors when starting out. To aspiring entrepreneurs she says, “First, count on me, give me a call! I’m happy to pay it forward. Additionally there are a lot of women networks or alliances of fantastic ladies who are doing the same or have done it before and want to help you. Second, believe in yourself. The sky is your limit. Do not let them tell you otherwise. Third, think of how you want to be remembered. I want to be remembered as someone who was not afraid of a challenge or giving a shot to impossible dreams.”