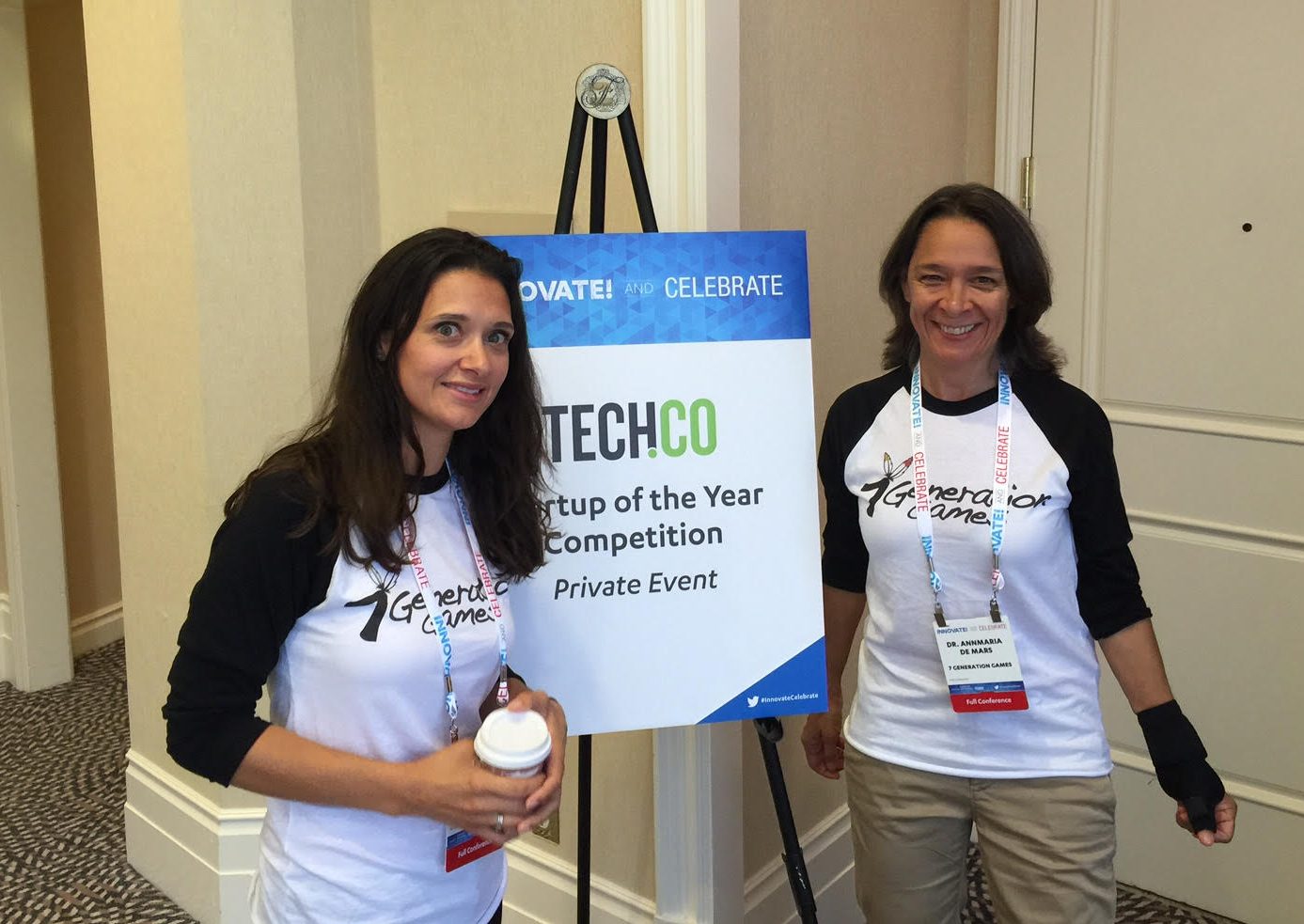 Maria Burns Ortiz is the CEO and co-founder of 7 Generation Games, a company that makes educational adventure video games that kids actually want to play, along with the tools to develop them.

The immersive video games teach math, history, and language in both English and Spanish and kids who play 7 Generation Games have seen scores improve after playing. Co-founded by Maria and her mother, Dr. AnnMaria De Mars, 7 Generation Games was created with the initial goal of closing the math gap in rural tribal communities.

After a successful career as a sportswriter for nearly a decade, Maria was looking for a change when her mother came to her with the idea to go into business together with 7 Generation Games.

“Being a journalist is all I had ever wanted to do and be from an early age. However, no one ever asks, ‘And after you achieve that goal, then what?’ But I reached a point where I had accomplished my goals in the field – and was asking myself, ‘Now what?’ At the same time – my mother got a grant to build out a series of educational video games and so in January 2013, the idea of 7 Generation Games was born,” says Maria.

Together, the two women had the expertise in  technology development, education, narrative and creative design, but no experience in actually making video games. So they spent the next two and a half years figuring it out and building the technology. By 2015, they had the opportunity to do a small investment round —on the condition they quit everything else and go all in on the company, which is exactly what they did.

Now fully invested in their venture, going from dream to a real business, they spent the next four years developing and selling their own games with a focus on underserved and overlooked communities from Indigenous tribes to English language learners in rural communities to the Latin American market.

“We created 20 games, serving over 150,000 users,” says Maria. “In doing this, we realized that in order to be successful financially – both against larger competitors that have way bigger budgets than us as well as at a price point that allowed us to focus on being accessible for underserved communities – we needed to find a way to make games faster and more cost effectively. That’s where 7 Gen Blocks was born as a platform.”

Their 7 Gen Blocks platform is how they have taken a process that is expensive, time consuming and requires significant technical expertise, and streamline it. Additionally their platform enables a more cost-effective approach and allowing them to easily do all of the things they want to do for education – from creating culturally reflective curriculums to multilingual content to better formative assessment.

Throughout this journey, the biggest struggle for Maria was raising capital as a Latina-founded tech company.

“Software, especially platforms, are cost-heavy upfront, exponentially so if you’re looking to scale that technology. It’s why venture capital and equity investment is so central to the tech industry. We knew that and we also knew that only .4 percent – as in less than one half of one percent – of venture capital dollars go to Latinas.”

Knowing the odds were against them, Maria and her mom did not want to rely only on investors. They went after almost every possible alternative funding and revenue streams from government research and development grants to crowdfunding campaigns and taking on projects that, while not directly aligned with their final vision, helped bring in the revenue they needed to continue toward their goals.

“We don’t come from any kind of background where our personal or professional networks are investor rich, and investment is very network connection driven. Not only that, but we found the bar for investment is always moving. We’ve had a fund say, ‘Come back when you hit X milestone.’ But then when you hit that milestone, it becomes ‘Oh, it took too long to hit that milestone. What we would need to see from you now is Y.’ And it becomes this cycle of reasons why you’re not good enough. Which we refused to accept because we know we’re amazing,” Maria says.

Maria believes that in some ways, these challenges have been “blessings in disguise”, forcing them to be more resourceful and learn to thrive in a turbulent industry.

“At the same time, maybe if we would have gotten some of that larger investment and not had to struggle as much,” she says. “As my mom says, ‘For once, I would just like my blessings to come as just blessings, not in disguise.’ And it’s unacceptable that Latinas only receive .4 percent of investor capital, because you know damn well, we have far more than .4 percent of good, scalable ideas.”

Raised by a single mother who for much of her childhood had to work multiple jobs and long hours, Maria learned very early on the value of hard work. Moreover, she saw firsthand the transformative impact that can be had by working hard and taking advantage of the opportunities that presents.

“I don’t believe the saying ‘If you love what you do, it’s no work.’ I’m really passionate about what I do and really enjoy my job, but it’s a lot of work,” she says. “I realize, in part because of the role model that I had in my mother, that to succeed you have to work really hard.”

Maria felt all that hard work pay off when she saw her own child enjoying and benefiting from the game she created. It was late one night when she went upstairs to check on her sleeping children—only to find her oldest daughter still awake under the covers with an iPad.

“In full Sherlock Holmes’ dramatic reveal moment, I flung the blankets back for my big gotcha! moment. Only to find that she was up late, deeply engaged in our newest game, Making Camp, doing division problems long past bedtime. I knew that we had long been working toward creating games that kids wanted to play. That engaged them in learning in a way that you lose track of time or find yourself staying up past bedtime to keep doing. But this moment proved that was possible.”

To other aspiring Latinas and women who are thinking of starting their own business, Maria says there is never a perfect time to start but to take the leap anyway.

“There will always be reasons that ‘this moment’ isn’t the right moment. There will always be an imaginary better time in the future – whether it’s when you’re more financially stable or more accomplished in your career or your children are older or whatever other reason.”

It’s easy to find reasons not to do it. For many women, taking the leap into entrepreneurship comes with more push-back.

“We often have smaller networks to leverage for capital and professional insights. When we step into entrepreneurship, we have fewer resources and fewer safety nets –  and yet, in spite of all that, when you look at the numbers when it comes to success metrics, whether it’s return on investment or number of jobs created or revenue generated, we are performing better and accomplishing it with less.” says Maria.

Still, challenges and obstacles like these have not stopped her and many women like her from going for their dreams and achieving success.

“Being an entrepreneur is a rollercoaster – and that means there are some very big drops. Over the years, I learned that there is ‘no one make or break’ moment. Don’t get me wrong – the wins are nice. But there’s tremendous value in realizing that you can pick yourself up from the losses and keep going.”