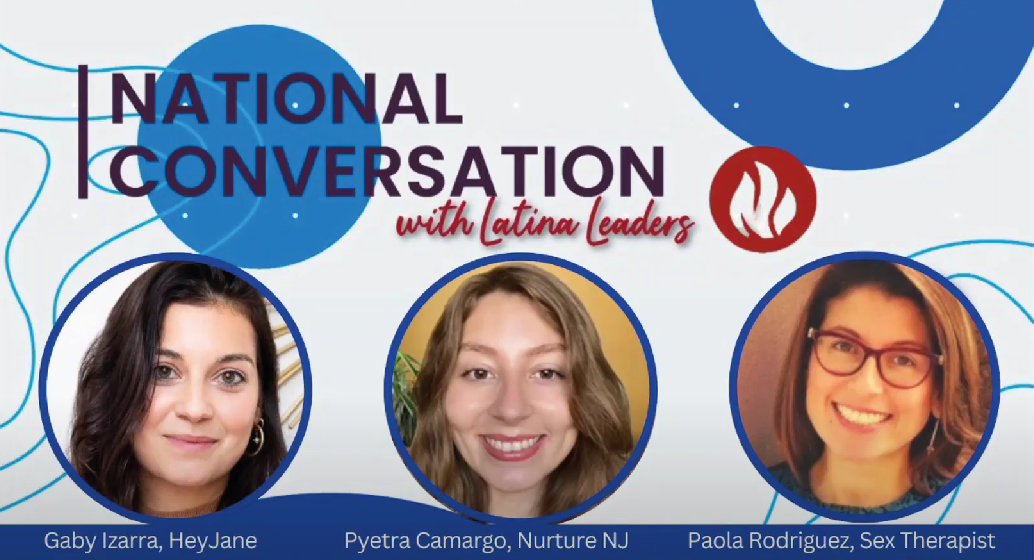 On September 30, Latinas in Business hosted the 5th National Conversation with Latina Leaders to discuss the Mental and Sexual Wellness of Latinas and other minority women in a post-pandemic world, and the added threat that the overturn of Roe vs. Wade by the U.S. Supreme Court poses on women of color.

The topic of this National Conversation was “Our Bodies, Our Health: State of Minority Women’s Mental and Sexual Wellness.”

The event’s second panel, State of Sexual Wellness for Minority Women, focused on the topic of sexual wellness for minority women, a conversation that is more important than ever following the U.S. Supreme Court’s decision to overturn Roe vs. Wade. With minority women already suffering disproportionately higher rates of maternal and infant mortality in the U.S., this decision could have lasting, severe, and disproportionate effects on some of the most vulnerable groups in the country, namely Black and Latino communities.

Guest speakers Paola Andrea Rodriguez, Gaby Izarra, and Pyetra Camargo shared important insights on these topics. Here are some highlights from that conversation.

*The opinions expressed below are the individual opinions of the speakers and not a position of Latinas in Business, which is a nonprofit, nonpartisan organization.*

How the pandemic impacted sexual relationships

Latinas in Business President and CEO, Susana Bauman, asked Licensed Clinical Psychotherapist and Certified Sex Therapist, Paola Andrea Rodriguez: In your practice, you interact with women bringing concerns about their sexual health and wellness. What has been your experience during and after the pandemic regarding those concerns?

Paola Andrea Rodriguez: “When it comes to sexual wellness and sexual health, whenever there is a crisis, we tend to go to the extremes because the gray area, there’s way too much uncertainty. And when we’re faced with our own mortality, which is what the pandemic did, we kind of ask ourselves, ‘Is this it? And if this is it, am I living a life worth living?’ And this translated into relationships. Many people started looking at their relationships, and they started saying, ‘Am I willing to continue to accept the things that I’ve accepted?’”

Paola says the pandemic caused many people to re-evaluate their relationships. There was a spike in marriages during this time, but also a spike in divorces.

Paola: “And when it came to sex, one of the main reasons why people stop having sex or no longer connect sexually is lack of time. However, the pandemic took all our distractions away. And now we look at each other again, and we’re still not motivated to have sex. So in my practices I saw a wave of couples wanting to fix their sexual relationship, but then, when it comes to sex, it’s not only about the sex itself, it’s about communication. It’s about companionship. The lack of sex in a relationship is so complex, and there’s so many layers to look at it from.”

Another factor that contributed to many couples feeling disconnected in their sexual relationships during the pandemic was the mental health toll of the pandemic. Many women became overwhelmed by grief, anxiety, and depression over the uncertainty of the world and the drastic life changes taking place during this time.

Paola: “Remember that one of our main sexual organs, one of the most important sexual organs, is between our ears. So if our mind is really busy, if we’re constantly thinking about the state of impermanence, all of that keeps you from being in your body. I often say that in order for you to connect sexually to yourself and your partner, you got to tell your mind to go on vacation.”

Additionally, Paola commented on the concept of guilt and shame as a barrier to sexual intimacy that many minority women struggle with, especially Latinas.

Some of that guilt originates from cultural and religious factors, says Paola. Many Latinas are given conflicting messages about sexuality growing up. Religious guilt and trauma can also but up those barriers to sexual enjoyment.

Paola: “There’s very passive and direct messages that we get like, am I gonna be punished by God, if this happens? And we grew up with a lot of myths. I work with a lot of religious trauma around guilt and being able to enjoy not only even sex with your partner, but sex with yourself.”

Gabby, you are the co founder of a tech company that provides abortion care. You started this project before the overturning of Roe vs. Wade, how does this critical moment in recent history impacted and marginalized communities? And what does it mean for your company?

Gabby Izarra: “The overturning of Roe vs Wade was just so devastating. Devastating for the country, devastating for individual liberty and equity. And just so devastating for our team. You know, there’s a reason why we do this, we’re all incredibly passionate about abortion access. So it was quite a somber day or even a somber month, truthfully, at Hey, Jane. With that said, it really did light a fire under us to continue expanding access to this critical need. In terms of how it’s impacted the company, I mean, we’ve seen a surge in patient demand. The reality is that abortion bans like the ones now sweeping the nation do disproportionately affect communities of color. So that’s black people, Hispanic people, because these are communities that just generally historically have less access to education, less access to contraception, and may just not have the means to travel to a neighboring state if they need to get care.”

Gabby says telehealth is really changing the game for women seeking abortions, allowing women to conveniently get care from home and avoid some of the barriers that stop many, such as travel costs and transportation, finding childcare if they have children, and safety concerns such as encountering protesters.

Gabby: “We recently ran a study, just trying to understand what do our patients most care about as they’re seeking care. And more than anything, it was the privacy of the treatment, the safety of the treatment, cost and convenience. But, you know, I was starting to slice the data to try and understand what are those nuanced differences between our Black patients or Hispanic patients, and some interesting things came up. Number one was that our Black patients cared more than anything about the safety of the treatment. And that was super interesting, given that they are more likely to deal with maternal morbidity. In terms of our Hispanic patients, they really cared about privacy, but also they cared and cost more than other patients, which I thought was interesting as well and just speaks to you know, their socio economic mean.”

On the topic of perinatal healthcare, Pyetra Camargo, Aide to Office of First Lady Tammy Murphy, State of New Jersey spoke about the initiatives NJ has developed to support minority women’s healthcare.

Sunana: “You have been working with New Jersey, First Lady Tammy Murphy, on her initiative, Nurture New Jersey, she launched like two years ago. What have you seen happening in the last 18 months after the onset of the pandemic? And what are the significant changes that you have seen related to minority women cause women’s concerns?

Pyetra Camargo: “Initially Nurture NJ came about because of the really wide disparities in maternal and infant care in New Jersey. In New Jersey, a black mother is seven times more likely than a white mother to die of pregnancy related complications. For Hispanic mothers, that rate is three times, and a black baby is three times more likely than a white baby to die before their first birthday in New Jersey. And a Hispanic baby is one and a half times more likely. And so because of all these issues regarding inequities, Nurture NJ came about to provide more access, and resources. We have our motto, which is, ‘Making New Jersey the safest and most equitable place in the nation to deliver and raise babies.’ So that’s the ultimate goal.”

Additionally, Pyetra says that the pandemic really exacerbated a lot of the disparities in healthcare access affecting minority women. Many were not able to get the resources they needed due to lack of accessibility.

Pyetra: “When we talk about telehealth, you still need the internet, you need a device to be able to access telehealth services. So even if you are offered that as an option, there might still be some barriers in being able to get that. We’ve just been trying to take away those barriers for mothers and for families.”

BUY LATINA! Enjoy your Hemp Lifestyle Wellness with these products!

Why Hispanics more likely to have type 2 diabetes

Domestic Violence Awareness Month: It can happen to anyone