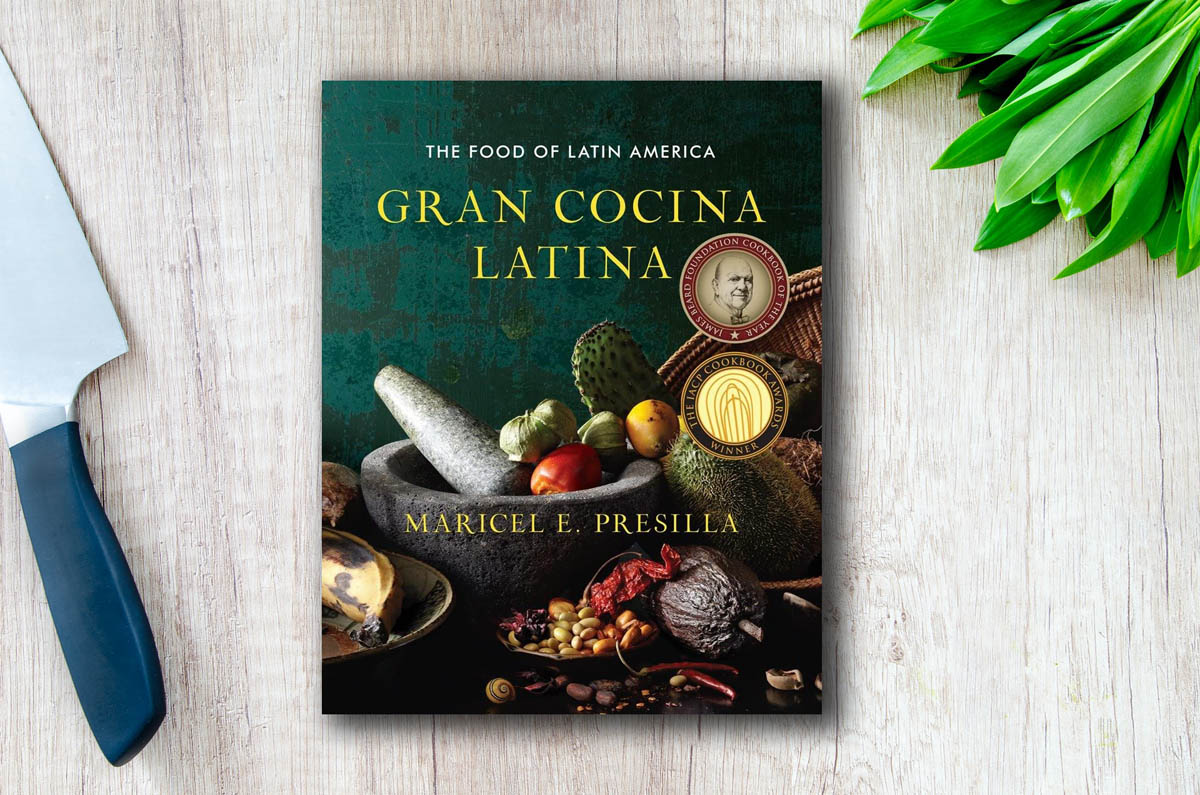 If there’s one thing Latinas love, it’s food. Our culture is centered around large gatherings and sharing good food with friends and family. So much is expressed through our food. Recipes are often passed down through generations, leaving a familial legacy. Food is also an artistic expression. Food is emotional and soulful.

Today we’re sharing a few cookbooks by Latinas from different Latin American countries. These recipes capture the cultures they are from and pass on traditions rooted in families for generations. If you’re looking to try something new or interested in exploring recipes from other cultures, then check out these Latina cookbooks below!

Written by mother-daughter-duo Morena Cuadra and Morena Escardó, The Big Peruvian Cookbook is a journey through the diverse gastronomy of the multicultural South American country, from its Andean peaks to its coastal towns and tropical jungles.

Become intimately acquainted with Peru’s universe of flavors, techniques, and traditions. Peruvian food is a fusion of its Incan roots, mixed with Spanish, Arab, African, Chinese, Italian, Japanese, and French influences, and the result is a vast and colorful range of dishes, each telling a distinct story.

Morena Cuadra is a trained chef and a wine expert and has devoted her professional life to promoting Peruvian gastronomy by editing and publishing cookbooks and magazines, and as

the Director and faculty member of one of Peru’s leading Culinary Schools.

Morena Escardó is a writer and a vegetarian home cook from Lima, Peru, with a fascination for holistic eating and turning any dish vegetarian, vegan, and gluten-free. Together with her mother, Morena Cuadra, she writes the Peruvian food blog Peru Delights.

Colombiana: A Rediscovery of Recipes and Rituals from the Soul of Colombia

To Mariana Velásquez, a native of Bogotá, the diverse mix of heritages, cultures, and regions that comprise Colombian food can be summed up in one simple concept: More is more. No matter what rung of society, Colombians feed their guests well, and leave them feeling nourished in body and soul.

Throughout the book, Mariana shares the vibrant style of Colombian food culture. For her, the best meals are never simply about the food but include the atmosphere, drinks, and simple snacks and sweets that complete the experience and make it memorable.

Mariana Velásquez is an international food stylist/artist and chef. Her work has been featured in the New York Times, Vogue, Food & Wine, Bon Appetit, and Gourmet, to name a few. A published author of three recipe books, she has also styled, art directed, developed recipes and collaborated on more than twenty cookbooks throughout her career. She collaborated on two books that received James Beard Book Awards. First Lady Michelle Obama hired Mariana to style the First Lady’s “American Grown” project.

The Mexican Home Kitchen: Traditional Home-Style Recipes That Capture the Flavors and Memories of Mexico

For Mely Martínez, Mexican cooking has always been about family, community, and tradition. Born and raised in Tampico, Mely started helping in the kitchen at a very young age, since she was the oldest daughter of eight children, and spent summers at her grandmother’s farm in the state of Veracruz, where part of the daily activities included helping grind the corn to make masa.

Illustrated with stunning photography, this Latina cookbook includes recipes for stews, soups, and side dishes, along with famous dishes like mole, enchiladas, picadillo, and milanesa, and is rounded out with delicious salsas, drinks, and desserts.

Mely Martínez started her blog, Mexico in My Kitchen, in 2008 for her teenage son, hoping that someday he will use it to recreate the Mexican food his mom made for the family. Mely enjoys cooking classic meals that are eaten every day in Mexico, and sharing them with her followers around the world. Her recipes are created from knowledge gained throughout her studies, travels, and life experiences.

Written by Pilar Hernandez and Eileen Smith, this Latina cookbook is full of authentic recipes that will bring classic Chilean flavors to your table.

The Spanish phrase quédate un poquito, or “stay a while,” is the essence of Chilean hospitality—one does not “stop by for a quick bite” in Chile. Composed of more than seventy authentic Chilean recipes, organized seasonally for maximum freshness, and tweaked ever-so-slightly to fit neatly into the US market, this book creates an accessible, authentic, and uniquely Chilean cooking experience. It marries Pilar’s family recipes and Eileen’s astute writings, which make even those who have never visited Chile feel like they have found home.

Pilar Hernandez is Latina mom and urban farmer. Born and raised in Chile, she went to medical school there and then moved to Houston, Texas in 2003 without knowing how to cook and speaking no English. Today she is a happy food blogger and coordinator of 3 community gardens.

Gran Cocina Latina unifies the vast culinary landscape of the Latin world, from Mexico to Argentina and all the Spanish-speaking countries of the Caribbean. In one volume it gives home cooks, armchair travelers, and curious chefs the first comprehensive collection of recipes from this region.

An inquisitive historian and a successful restaurateur, Maricel E. Presilla has spent more than thirty years visiting each country personally. She’s gathered more than 500 recipes for the full range of dishes, from the foundational adobos and sofritos to empanadas and tamales to ceviches and moles to sancocho and desserts such as flan and tres leches cake. Detailed equipment notes, drink and serving suggestions, and color photographs of finished dishes are also included. This is a one-of-a-kind cookbook to be savored and read as much for the writing and information as for its introduction to heretofore unrevealed recipes.

Maricel E. Presilla is the co-owner of Zafra and Cucharamama, two Latin restaurants in Hoboken, New Jersey. She holds a doctorate in medieval Spanish history from New York University.