“The Latino community is very funny and we often use that humor to heal,” says Latina Comedian Gina Brillon 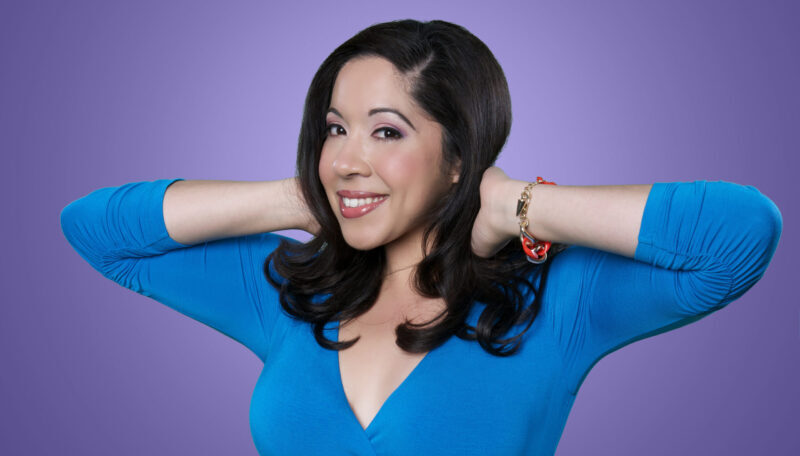 Gina Brillon was born and raised in the Bronx, New York. The Puerto Rican actress, comedian, writer and mom has been a standup comic since she was 17 years old. Her 1-hour special Gina Brillon: The Floor is Lava won a 2021 Gracie Award, is nominated for an Imagen Award, and is available on Amazon Prime Video, along with her first special, Pacifically Speaking. Her 1/2 hour special Easily Offended was one of the top shows from the Entre Nos franchise on HBO Latino, and streams on all HBO Digital Platforms. Gina will be performing at the upcoming 2022 Women Entrepreneur Empowerment Summit Friday 6/24. REGISTER NOW!

Gina fell in love with comedy at the age of fourteen after years of being exposed to comedy as a form of healing. Growing up in her household she says whenever her family would go through something, humor was always involved in their healing.

“I think a big thing for the Latino community is, we’re funny. We are very funny. And we often use that humor to help us heal and to help us get through difficult situations. And growing up in that environment I just learned to kind of do the same.”

That sense of humor grew into a passion as Gina was exposed to more comedians through HBO specials and stand-up performances. When she was fourteen she watched southern comic Brett Butler, and then later George Lopez, and both inspired her to want to be a comedian herself.

“I said, this is what I want to do for the rest of my life,” Gina recounts. “And I had to figure it out and just be willing to do the work. And I think if there’s anything that I’ve noticed about the backbone of the Latino community is we are creators. We are just a creative, beautiful culture. And we are driven.”

That drive and work ethic was instilled in Gina at a young age and it came naturally to her to push and strive to make her dreams come true.

She began by diving right into the New York comedy scene. Instead of taking comedy classes like many comedians do when starting out, Gina went to open mic nights every week, bringing friends along to get on stage, and putting in hours of hard work to get noticed.

“I also ended up having to do this thing called barking, which is when you stand outside of a club in New York, or you stand in your on the street corner somewhere, and you’re literally just giving away a flier that gets somebody into a comedy show and hopefully they show up,” says Gina.

Her big break finally came when she got her first television credit. As she moved up in her television work she began auditioning and getting spots at comedy clubs.

Since those early days, Gina’s career has taken off and she has achieved much success as a Latina comedian. When asked for her top successes thus far, Gina says her HBO specials and her time on America’s Got Talent are two of her favorite moments.

“I’ve done two things for HBO, I did a 20 minute special. And then I did a 30 minute special. Now the 20 Minute special was extra emotional for me, because I grew up watching comics on HBO. And that was where I would watch my first couple of comedians. And I remember when I stepped off stage after doing that 20 minutes for HBO I just started bawling. And everybody was like, Oh, my God, like what’s wrong? And it just hit me that I just did stand up for HBO. I was just crying so much. It was incredible.”

On America’s Got Talent Gina felt so much pride in being able to represent her culture as a Latina comic and South Bronx native, making it to the top ten in the competition.

“Being able to represent my people, where I’m from, my family, like, it was a huge moment for so many reasons,” she says. “It just meant a lot to me to be representing them and to make it that far in the competition. It was an incredible and life changing experience to make it to the finals, honestly.”

During the competition Gina also had the opportunity to meet and work with her comedia idol, George Lopez. Gina was starstruck when she was paired with the comedy legend as part of a segment in the competition.

Due to scheduling conflicts, Gina struggled to be matched with a celebrity comedian for the segment until she joked, “Has anybody asked George Lopez,” thinking it would never happen.

“Well, they reached out to him. And he said, yes. And I froze when my manager told me because I was like, I’m gonna meet George Lopez.”

Meeting her idol and comedy role model was both exciting and nerve-wracking for Gina. She thought, “Oh my God, I’m gonna cry, I’m gonna run and hide, I’m not gonna be able to talk, I’m gonna be shaking.” But ultimately held it together pretty well.

You might be interested: “We are the engine that moves society, and nothing is impossible,” says NJ Department of Health Chief of Staff Andrea Martinez Mejia

So she shaved his hair on national television, never having used clippers before!

Despite the craziness and the nerves, it was an incredible experience for Gina and shows just how important idols and role models can be in any industry.