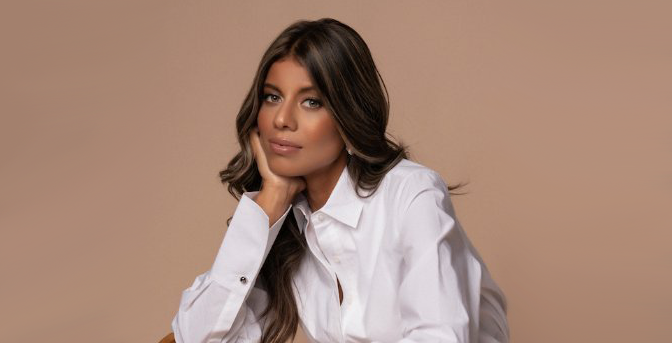 Paola Santana is a lawyer, public procurement expert, and Latina tech entrepreneur, creating the next breakthrough in government systems.

She’s the founder and CEO of Social Glass, a government software ecosystem using artificial intelligence and exponential technologies to digitize, streamline, and scale public procurement systems and processes, and enable better decision-making in the public sector across the United States and Latin America.

Best known for her ability to create things from scratch at the intersection of the public, private and regulatory domains, and for her track record of introducing cutting-edge technologies into highly-regulated markets, her most recent experience includes co-drafting the public-private partnership enabling the first multi-state Hyperloop system in the United States.

Previously, she co-founded Matternet, a Silicon Valley company pioneering drone logistics networks. Under her leadership, Matternet engaged with The White House, US Congress, FAA, and NASA to enact the first drone regulation in the United States in 2016, and became the world’s first drone delivery platform authorized for permanent operations over a populated city in 2017.

In addition to her entrepreneurial ventures, Paola currently serves as Faculty at Singularity University and Mentor for the Social Entrepreneurship Labs Incubator at Stanford University and Google AI.

Last month, Paola shared her experience of being a Latina entrepreneur in a male-dominated industry during the 4th National Conversation with Latina Leaders: Latinas & Success.

Traditionally, male-dominated industries and occupations are particularly vulnerable to reinforcing harmful stereotypes and creating unfavorable environments that make it even more difficult for women to excel. Despite these struggles, Paola was able to overcome those stereotypes and achieve success as a Latina entrepreneur in the tech industry.

“It’s very hard to see where you can get when you don’t see someone like you doing those things,” Paola says.

Paola began her career as a lawyer but branched off into the world of government and tech so she could pursue her desire of creating change and opportunities globally.

In her twelve years within these male-dominated industries, Paola has seen and experienced firsthand the obstacles women face.

One recurring struggle is that many women are not given credit for their work or given the appropriate titles. Many times women themselves will underplay their roles and their value in male-dominated industries.

“Every woman that is running anything from their little business in their brain, is just like, ‘Oh, this is my side business.’ Like, No, you’re the CEO of that business. That’s number one,” said Paola. “So to every woman out there that doesn’t feel like they’re running something, just own your title. You are the CEO of that thing that you’re running day to day, whether that’s a project internally in a big corporation, or that’s your own business.”

This Latina tech entrepreneur recounted her early career in law in the Dominican Republic and how she learned to own her title as a founder and entrepreneur.

It’s hard to see where you can go when you are the first one doing it in your industry or there aren’t others like you to look up to.

“You’re going to be uncomfortable, but you’re creating a new vision for what that role can be for you and for many people behind you,” said Paola.

“So I do believe that is important to yes, inspire others, but also to tell others, you know what you’re doing, nobody has done it. So you need to duel the pros and cons. You’re a little bit alone, but at the same time, that means you don’t have to fit into anybody’s mold because you’re a whole new category of something. And I feel like that’s how I’ve carved my way into what I’m doing right now.”

We need to have diverse people at the table

Diversity and representation across all industries are important and crucial. Sometimes, you may not be working in a male-dominated industry but you could be in an industry that was shaped or designed by men.

Paola touches on this issue as well. “You feel out of touch or out of many things because this industry was not created to embrace you or to even embrace who you are or how you think,” she said.

“So my perception is that you would always feel uncomfortable. And being uncomfortable—while not something you should embrace all the time—is an outcome of growing and going into places where nobody has been there before you. And that means creating larger tables. I tell everybody, investors, and people that work with me, I tell them: What’s the point? How can you create global products, if you don’t have a global team? And a global team means that you need to have diverse people at the table.”

Leaders and pioneers of the industry need to prioritize these issues and create those larger tables that give everyone a seat.

As a leader, mentor, and Latina tech entrepreneur, Paola Santana is working to make room at the table for more women like her and others who have been overlooked before. Through conversation and action, we can bring together Latinas and minority women and open doors for greater opportunities across all industries.

You might be interested: From backyard chef to restaurant owner, Chef Yala shares her entrepreneurial journey and rise to success