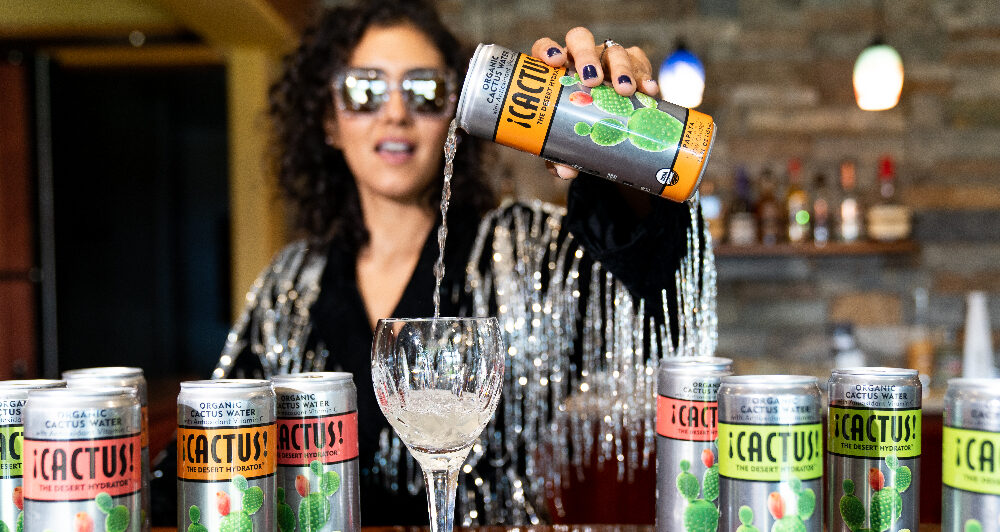 Sarita Lopez grew up eating Nopales but didn’t truly appreciate their health benefits and rich history until she began farming and selling the paddles at local markets. Since then, she has created two cactus water lines in hopes of introducing the amazing health benefits of cactus water to more of the US.

Sarita’s career in the beverage industry began when she moved to Austin, Texas after college and soon received a job at a large soda company. After seeing the difficulties of having a beverage business, she swore she would never start one of her own.

However, all of that changed after she moved back to her hometown of Napa, CA, to start an organic farm with her family.

On their farm, wild cactus paddles grew on their land and one day a worker suggested they harvest the paddles because of their popularity in the Latino and Hispanic market.

“Growing up, I knew what Nopales were and ate them, but never knew about their history or healthy benefits. I began to research them and spoke to family and friends familiar with this particular cactus. When I found out how much goodness was packed inside the paddles, I began to incorporate them into my life,” Sarita says.

“Within two weeks, the eczema that plagued me my whole life began to clear up and my digestion felt better than ever. I became driven to learn as much as I could about this ancient plant and spent hours exploring its nutritional marvel, moved by the many studies about its benefits and rich background.”

Through her research, Sarita learned the fascinating cultural history surrounding the cactus plant and its uses in medicine and wellness.

Today’s research shows components of cactus leaf may promote health benefits such as muscle recovery, combat free radicals and oxidative stress linked to inflammation, support cardio and skin health, and may even lessen the effects of hangovers.

“I began to sell cactus paddles, and customers raved of their benefits and features.”

Then Sarita found out that most of her customers were juicing the Nopales and this sparked an idea. She decided to combine her worlds of beverage and farming and launched her first cactus water in 2017, “Green-Go” which later evolved and became ¡CACTUS!

Standing strong like a cactus in the face of challenges

Aside from her passion for cactus water and sharing its health benefits with people, another motivating factor to launch her business was her desire to honor her heritage and her family.

“I watched my father, a Hispanic scientist, face racism in his work world and while living in Napa. I swore that if given the chance, I would create something of my own, just like my dad, to help combat the idea that the color of skin would and could not dictate a person’s path in life. I am fiercely proud of my heritage and love that I have a platform to speak about Nopales, a food that has been eaten for centuries by indigenous people whom I share blood with,” Sarita shares with Latinas in Business.

Throughout her entrepreneurial journey, Sarita has also learned a lot. When she first started out, there was some stumbling as she navigated this new process.

“It’s easy to spend too much money too quickly,” she says. “Looking back, I signed with top distributors and brokers too soon and sold in too many states for the profits to make sense. I now work with the Small Business Development Center and connected with a financial advisor who helped me create a strong budget with realistic projected expenses and sales. There is a lot of free help for small businesses. I also realized the benefit of creating a business plan. Numbers truly don’t lie!”

After launching her first cactus beverage line in 2017, she received some good press and attention, but by 2019 Sarita decided it was time to evolve her brand.

“I started with the product. After much research and taste testing, I moved from one unsweetened, zero-calorie cactus water in aseptic cardboard to three popular organic flavors, each lightly sweetened with organic agave (5g sugar, 30 calories) and packaged in 12-ounce recyclable sleek cans. And I changed the brand name to ¡CACTUS! to more directly convey that our product is cactus water—important given the multitude of beverage products on store shelves.”

With a new look, name, and flavors 2020 started strong for Sarita and ¡CACTUS! Even the pandemic could not sway them.

“Just like a cactus being able to survive some of the harshest elements on earth, our company survived 2020 and we are stronger because of it,” Sarita writes on her site.

Today, Sarita continues to strive for success with her company, not just for herself but for all the people who have been part of her journey and believe in her company.

“I want them to share in the riches as well. The old cliché is true – there is no “I” in “team!” Knowing that I can share my victories with the people who have been by my side since the beginning is what gets me out of bed, ready to start a new and beautiful day,” she says.

To other Latinas and minority women entrepreneurs thinking of starting their own venture, Sarita “really, REALLY” recommends creating a business plan!

“Figuring out your market, expenses and sales projections helps you make sure you are on track for success. Use as many free or not-so expensive resources as possible, such workshops and classes through your local Small Business Administration.”

“Everyone has a great idea or two, but the ones that have a chance in making that dream come to life are those who put ideas into action!”