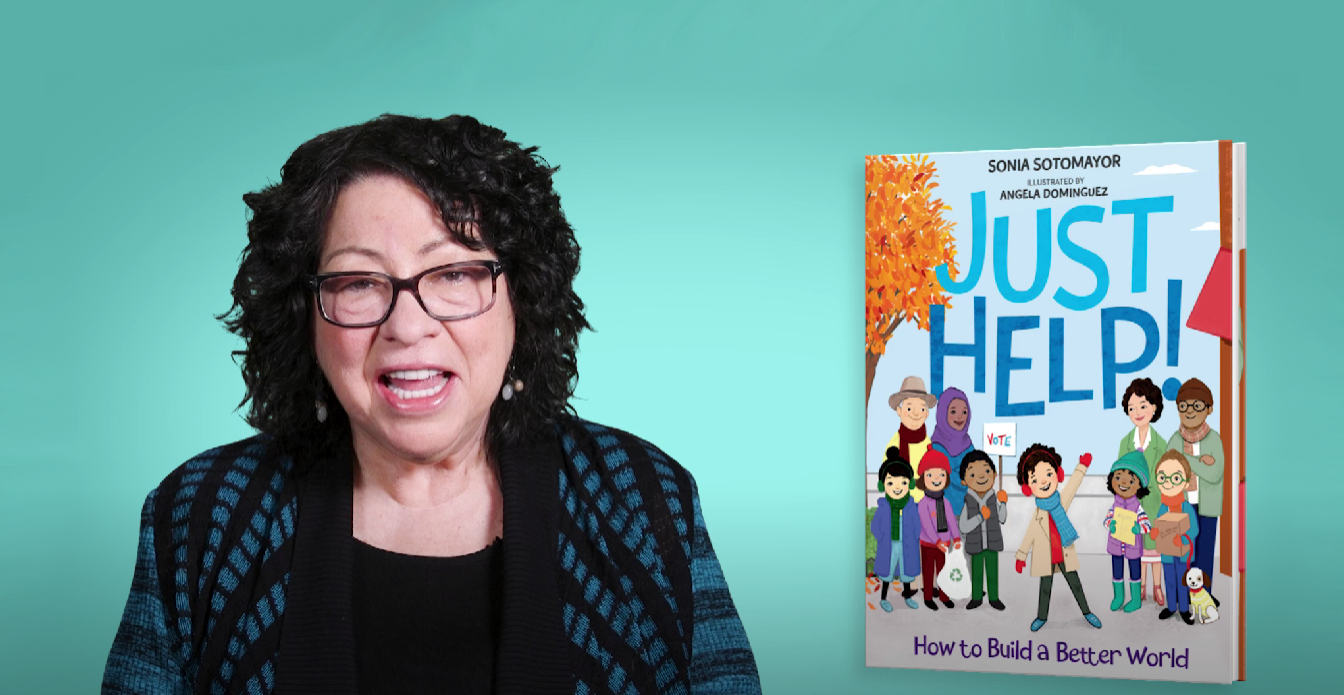 Supreme Court Justice Sonia Sotomayor is teaching children how to build a better world through public service and acts of kindness.

In her new book, Just Help! How to Build A Better World, a young girl named Sonia is asked by her Mami every night: How did you help today? Since little Sonia wants to help her community, just like her Mami does, she always makes sure she has a good answer to Mami’s question.

In a story inspired by her own family’s desire to help others, Sotomayor takes young readers on a journey through a neighborhood where kids and adults all help one another to build a better world for themselves and their community.

Illustrated by award-winning artist, Angela Dominguez, this book shows how we can all help make the world a better place each and every day.

“People think about civic participation as just limited to being an elected official … or maybe the people who go into the military,” Sotomayor said in an interview with “TODAY” host Savannah Guthrie. “Kids, and many adults, don’t realize that public service is not just those big acts of getting elected and making changes that way. But it’s the little things each of us do every day to improve our communities.”

The book draws inspiration from Sotomayor’s early childhood and honors her own mother, Celina Baez Sotomayor, who passed away last year.

Raised in the Bronx in a housing project just blocks away from Yankee Stadium, Sotomayor and her faced hardships such as life-threatening juvenile diabetes, poverty, and being raised in a one-parent household after the death of her father.

Still, despite these challenges, Sotomayor remembers her mother always made time to help her neighbors.

In an interview she told People en Espanol’s Book Corner, “My mom was always busy doing a favor or an errand for a neighbor, like picking up medicine for someone or helping someone make a doctor’s appointment. She taught me that every person can make a difference in improving the lives of everyone in their communities.”

When asked by NBC about how her mother would feel about her newest book, Sotomayor responded, “She would have been just delighted.”

This book is a great tool for parents and educators to teach children about their civil duties and show them how simple acts of kindness can create positive change in their communities.

“Changes in the world don’t always happen in giant leaps. It takes every one of us purposely looking at the world around us and say, how do I make it better?” Sotomayor said. “If we each did that, we would be living in a better world.”

Sonia Sotomayor was born in the Bronx, New York. She earned a BA from Princeton University and a JD from Yale Law School. In 2009, President Barack Obama nominated her as an Associate Justice of the Supreme Court, and she assumed this role August 8, 2009, becoming the first Latina to ever hold such a high position. She is the author of My Beloved World, Turning Pages, The Beloved World of Sonia Sotomayor, Just Ask! Be Different, Be Brave, Be You, and Just Help! How to Build a Better World.