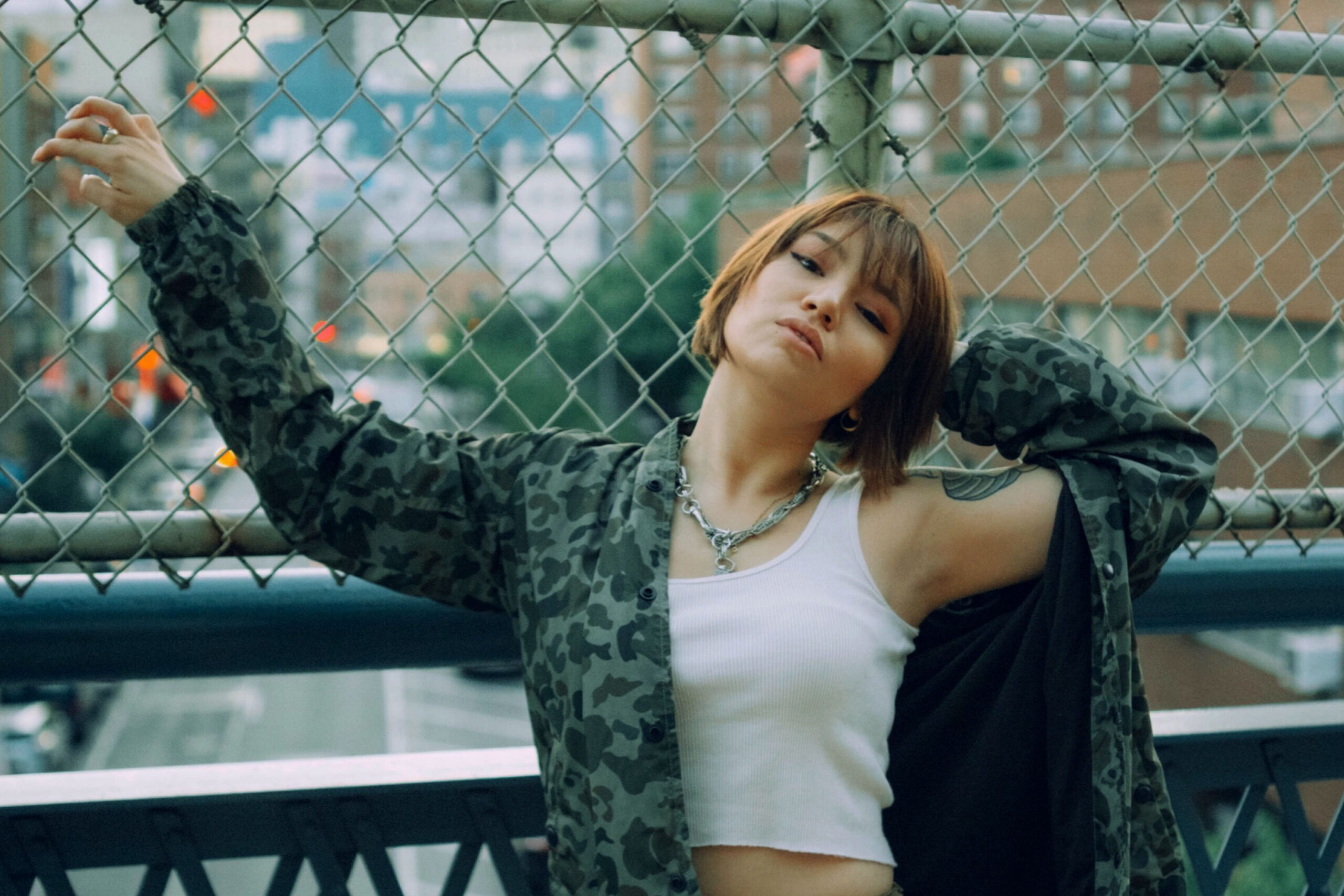 Her latest single “Frecuencia” helps listeners disconnect from bad news and the pressured lifestyle of current society, transporting them to a calm environment with a silky vocal tone, flowing naturally, about being in tune with the right person, with what you want, and with yourself.

Alex says, “Many times, when referring to Latin or urban music, people assume explicit and sexually insinuating content, loaded with sexual flirtation. However, even though I’m Latina and my voice sounds sensual, I don’t like to create that kind of direct content. I always think about the generations that are growing up and how I would like them to enjoy my music no matter how old they are.”

In the process of creating an EP that was going to release in July 2019, Alex got sick, her ear burst and had to postpone the release. Alex went into quarantine and began to rethink her project and how to identify with it. Additional adverse situations forced her to shave her hair completely, feeling like a blank canvas, and she launched a new musical project from scratch.

Alex Le Angel was born with her new look, making music from her room with resources at hand—a very old laptop, one mic, zero contacts—and looking to be as fluid and true as possible. The name came from the idea that El Angel de Dios was the one who helped keep Alex on her feet and not give her up during that tough period of her life.

Growing up as a cheerleader, dancer, and athlete as a child, Alex was always surrounded by an audience to entertain. However, she grew up in a traditional home where being a singer wasn’t accepted as a career.

“Like many, I grew up in a home where much was unknown about creative talents. Even so, I managed to exploit my creativity, composing songs all the time, practicing performances,” says Alex.

As a child, she remembers calling a popular TV channel in Colombia and managing to sign up for a children’s program casting call. She didn’t get selected at the time and she stopped looking for opportunities to get into the entertainment industry.

Then, when she was 16 years old, a man passing by offered her a modeling opportunity.

“My pixie hair caught his attention and he offered me to be a model for a couple of catwalks. He gave me his cell phone number so that my mom could contact him.”

This opportunity as a teenager allowed her to participate alongside older models, however music was still there, beating in her heart. Alex spent most of her teenage years at underground concerts with the dream of having a band, but nobody she knew had the same passion and interest in the idea as she did. Still, Alex persisted in her dream of making music.

After high school, her parents told her they would support her music career if she went to college to study something that would give her economic stability. Alex decided to study Industrial Design, with an emphasis in Universal Design for children with autism. On the side, she continued to work on her music career even though it was challenging at times.

“During my university studies, I worked to pay for hours in recording studios and recorded and produced songs. At that time in Colombia it was a bit expensive and I didn’t have a lot of time since I had to keep my grades up and my job.”

Once Alex finished university, she was ready to finally focus on her dream career as a musician.

Taking a leap of faith on her dream

After getting fired from her job at a design office, Alex went to work at a call center. During her time there, she realized her creative energy had dried up. She shared this feeling with other artist friends like Dilson, the vocalist of La Pestilencia (Colombian Rock Band), they recommended she move to another place like Los Angeles or New York to grow as an artist.

Alex took their advice to heart, spontaneously deciding to hop on a plane straight to New York.

“I kept my ticket to NY a secret for a few months, and I told my parents the surprise that I was leaving the country with 15 days left before the flight, since I didn’t want anyone to stop me from taking that leap of faith. I no longer wanted to postpone my personal plans because of anyone’s opinion.”

Alex left her comfortable lifestyle in Colombia to start living on the floor, with no money, no friends and no family to keep her music career growing. It wasn’t easy and success did not come as fast as Alex thought, but it has been worth it.

In 2019, Alex faced many struggles, and then in 2020 the pandemic created more obstacles.

“Just a couple of days before the lockdown, the boy I was with left me because he did not believe that I was going to grow more as an artist,” she shares. “He left me alone in the pandemic, and just after that I starting to create one of my songs with the highest number of replays and it was that song that opened the door for me to be interviewed by several large TV networks and led me to be published in major magazines and newspapers in Colombia and the Latino community in the US.”

Despite all the challenges thrown at her along the way, Alex has always persevered and found the positives in every situation, not letting negativity bring her down.

You might be interested: Take a sneak peak inside the highly anticipated book by #WomxnCrush Music founder Ashley K. Stoyanov Ojeda

To all women aspiring to start a career in the music industry, Alex says, “Never stop moving forward, regardless of the fact that the surrounding landscape does not seem to change. Walk without looking to the sides, much less back. Always look ahead to where you have to move, and up if you need direction. Surround yourself with people with similar dreams and high expectations like yours, and even better if they are people who can somehow complement your project, since the only way for you to shine is by letting others shine through you. And the most important, be true to yourself, nothing is better than doing the right things with integrity even if it is gonna take a long time, just enjoy the process.”

For Alex, she found that having the right mindset changed everything.

“I think most of the obstacles were in my mind,” she says, reflecting back on the challenges she faced. “It is necessary to learn to develop patience during this race and learn how to keep going on, to persevere and act in faith regardless of the results obtained, and not letting thoughts of defeat nest in my mind.”

She has also stopped comparing her success to that of other artists. In our fast-paced, tech-driven society it’s become the norm for artists to release new songs very quickly and focus on likes, comments, and number of listeners. However, Alex’s artistic process is not so fast-paced.

“Living in this world where social networks and technology pressure people to live in the immediacy, to depend on how many likes, or views, or followers, they run the risk of comparing themselves and letting those numbers define them as people,” Alex says. “

“I know my process. And my journey as an artist has been building me up enough not to fall into that mental game of the system but to take advantage of it. I truly believe in myself, and I know that at the right time my music will bloom in the way that I have always hoped.”

Currently Alex is a graphic designer for a local printing shop in Williamsburg while she continues to build her music career.

“I’m thankful for being where I am now and looking forward to seeing how far I’ll go,” she says.