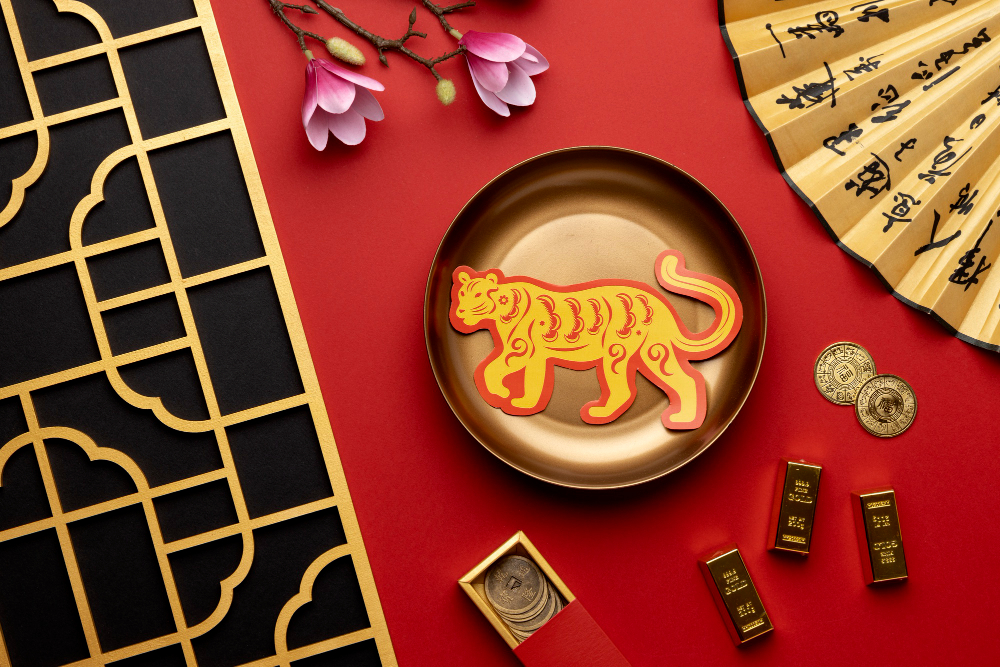 Today marks the first day of the Lunar New Year—also known as Chinese New Year. The holiday is one of positivity, unity, and prosperity, with families and loved ones gathering together to celebrate with traditional foods and activities that promote good fortune for the year to come.

Each new year is represented by an element—earth, water, fire, wood and metal—and one of the 12 animals of the zodiac: the rat, ox, tiger, rabbit, dragon, snake, horse, sheep, monkey, rooster, dog and pig.

This year is the year of the Water Tiger, which symbolizes strength, bravery, and clearing away evil.

Celebrated throughout China and other East and Southeast Asian countries, the holiday begins with the first new moon of the lunar calendar and ends on the first full moon, 15 days later. Since the lunar calendar is based on the cycles of the moon, dates for the holiday vary slightly each year. This year’s Lunar New Year celebration begins on Feb 1 and lasts till Feb 15, culminating in the traditional Lantern Festival.

There are many ways to celebrate the Lunar New Year and many traditions that are believed to promote wealth and well-being during this time. Embrace some of these traditions to boost your positivity and prosperity in 2022. We could all use a little more of both!

The Lunar New Year period is all about promoting positivity. It is considered taboo to say words with negative connotations. The belief is that saying these words will jinx yourself or loved ones, resulting in negativity and misfortune throughout the year.

Words relating to death, sickness, emptiness, pain, ghosts, and poverty should be avoided.

Even if you’re not superstitious, it’s nice to focus on the positives and make an active effort to speak positivity into the world. Take some time to be mindful of your words this Lunar New Year season and attract the positivity you wish to receive this year.

The most common gifts are red envelopes (or lai see). Red envelopes contain money in them and are often given to children and elders with well-wishes for another safe and peaceful year.

There are various traditions surrounding gift-giving and the amounts of money given in red envelopes. One such tradition is to avoid giving an odd amount of money. Even numbers are preferred as it is believed that good things always come in doubles. Some numbers also have specific meanings such as 8 symbolizing “wealth.” However, the number 4 should be avoided as it sounds like the word for death in Chinese.

There are a few taboos to avoid during the Lunar New Year that are believed to cut-off the flow of prosperity. One of these is breaking things made of ceramic or glass such as a bowl, plate, glass, vase, or mirror.

If someething is broken accidentally, the fragments are wrapped up in red paper while saying, “Sui sui ping’an” which means ‘all year round safe and sound’.

Another action to avoid during the fifteen day period of the Lunar New Year—also known as the Spring Festival—is the use of sharp objects such as knives or scissors. These objects are believed to cut your stream of wealth and success. Due to this belief, many also avoid cutting their hair until all the festivities are over and many salons may be closed on the first day of Lunar New Year.

Like the western New Year, firework displays are a big part of the celebration. In China, billions of fireworks go up in the first minutes of Chinese New Year. Setting off firecrackers and fireworks are believed to scare away evil and welcome the new year’s arrival.

It is also believed that the louder the firecrackers, the better and luckier it will be for business in the coming year.

Many avoid lending or borrowing money during the Lunar New Year as it is associated with debt. Traditionally, one should pay all debts by New Year’s Eve and one should avoid demanding money for unpaid debts during this time as well. This custom is a show of understanding. It allows everyone a chance to celebrate without worry.

Following this tradition ensures prosperity and abundance for the coming year and fosters a feeling of good-will and positivity.

The most common Lunar New Year foods include dumplings, fish, spring rolls, and niangao. Lucky food is served during the festival season, especially on New Year’s Eve, which is believed to bring good luck for the coming year.

Like most Lunar New Year traditions, symbolism plays a big part in which foods are eaten. Fish is considered a lucky food because it sounds like “surplus” in Chinese. Yuanxiao or sticky rice balls symbolize family unity while dumplings symbolize wealth and fruits such as oranges and tangerines represent fullness, wealth, and good fortune.

Consuming these “lucky” foods may just boost your prosperity for the new year, and they sure are tasty!