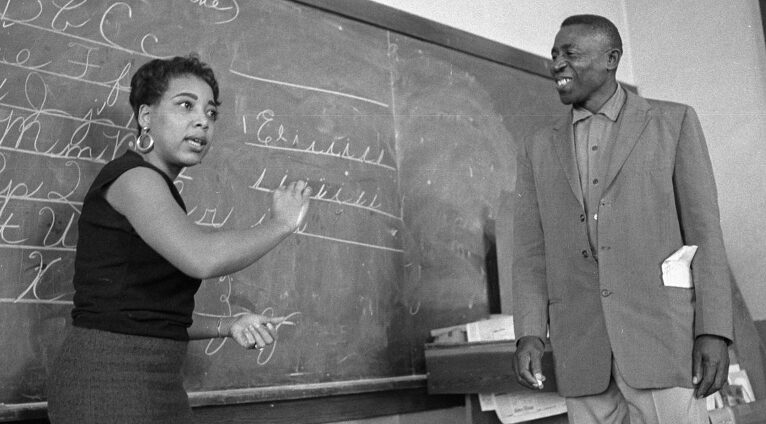 This year on Martin Luther King Jr. Day, we want to celebrate some of the incredible but unsung women activists of the Civil Rights Movement.

Within mainstream narratives, women such as Rosa Parks have been “reduced to limited images of obedient femininity, or “accidental” matriarchs.” The typical story most children learn in school about Rosa Parks is that she refused to give up her seat to a white man on a bus. The narrative often depicts Rosa Parks as a random woman who simply decided to do this one day. In reality, Rosa Parks was an activist and member of the NAACP for many years prior.

Like Rosa Parks, the portrayals of women in the Civil Rights Movement as “accidental” matriarchs work to diminish the impact of their activism. Instead of being seen as active participants, the mainstream historical narrative reduced the efforts of Black women as “passive and unassuming.”

However, Black women were certainly not passive participants. They played active critical roles throughout the Civil Rights Movement, from leading local civil rights organizations to serving as lawyers on school segregation lawsuits. African American women operated as local leaders in many areas, bridging the gap between national and local grassroots organizations.

Women of the Civil Rights Movement

Coretta Scott King is most famously known as Martin Luther King Jr.’s wife. However, her activism began long before her marriage and extended beyond her husband’s death. In her activism, she also voiced her experiences with sexism within the Civil Rights Movement stating,

Additionally, we would not have this day to celebrate if it weren’t for the consistent efforts by Coretta who lobbied for 15 years to help establish Martin Luther King Jr. Day as a federal holiday.

Dorothy Cotton was a leader and activist who was recruited by King to work at the Southern Christian Leadership Conference in Atlanta. She originally planned to stay for only three months, but ended up staying for 23 years.

One of her biggest achievements within the movement was establishing the Citizen Education Program, a program to help blacks register to vote. The program also helped teach community and individual empowerment.

In her autobiography, she wrote, “our work with SCLC was not just a job, it was a life commitment.”

Dorothy has also been credited with typing the famous “I Have a Dream” speech in a hotel room in Washington.

Jo Ann Robinson was a college professor and the first person in her family to graduate from college. She is known and remembered as the woman who orchestrated the famous Montgomery bus boycott after she was degraded by a bus driver for sitting in the “whites only” section.

Later, she became president of the Women’s Political Council in Montgomery and made it a priority to desegregate the city’s buses. She led the Montgomery bus boycott becoming a key player behind the scenes and faced arrest, violence, and intimidation for her activism.

Later, in her memoir, she reflected on the bus boycott and wrote, “An oppressed but brave people, whose pride and dignity rose to the occasion, conquered fear, and faced whatever perils had to be confronted. The boycott was the most beautiful memory that all of us who participated will carry to our final resting place”

King also praised her work in his own memoir stating, “Apparently indefatigable, she, perhaps more than any other person, was active on every level of the protest.”

Gwendolyn “Gwen” Zoharah Simmons first became involved with the Civil Rights Movement when she joined the Student Nonviolent Coordinating Committee (SNCC) after hearing a speech by Dr. King. She was later one of three women chosen to be a field director for the Mississippi Freedom Summer Project, which aimed to establish “Freedom Schools” and increase black voter registration.

Through her work within the organization, she organized twenty-three volunteers who built Freedom Schools and a library, conducted a literacy program and mock voter registration project, and rallied for integration of local restaurants and schools.

“I often had to struggle around issues related to a woman being a project director.  We had to fight for the resources, you know.  We had to fight to get a good car because the guys would get first dibs on everything, and that wasn’t fair…it was a struggle to be taken seriously by the leadership, as well as by your male colleagues.”

Dorothy I. Height’s political activism began in high school when she began participating in anti-lynching campaigns. When she was set to begin college, Dorothy was met with roadblocks due to her race. She was accepted to Barnard College in New York, however, the college later changed its mind and refused to admit her, stating that they had met their “quota” for black female students.

These early experiences with racism motivated her activism. She later attended New York University where she earned two degrees in four years, a Bachelor’s in education and a Master’s in psychology.

Dorothy’s achievements only continued as she ascended to the presidency of the National Council for Negro Women, a position she held from 1957-1998. As an activist within the Civil Rights Movement, one of her crowning achievements was the March on Washington for Jobs and Freedom in 1963. Dorothy helped organize the march and stood close to King as he delivered his memorable “I Have a Dream” speech. However, the experience was an eye-opener for Dorothy in which she saw how women’s contributions were brushed aside. Despite her skills as a speaker and leader, she was not given the opportunity to speak that day.

Of the experience she said, her male counterparts “were happy to include women in the human family, but there was no question as to who headed the household.”

Despite the lack of recognition, Dorothy continued her activism and went on to serve as a leader in various organizations such as the Young Women’s Christian Association (YWCA), serving as their National Interracial Education Secretary in the 1940s and the first director of its Center of Racial Justice in 1955. Dorothy also helped found the National Women’s Political Caucus and has received many honors for her contributions such as the Presidential Medal of Freedom which was awarded to her in 1994 by President Bill Clinton.