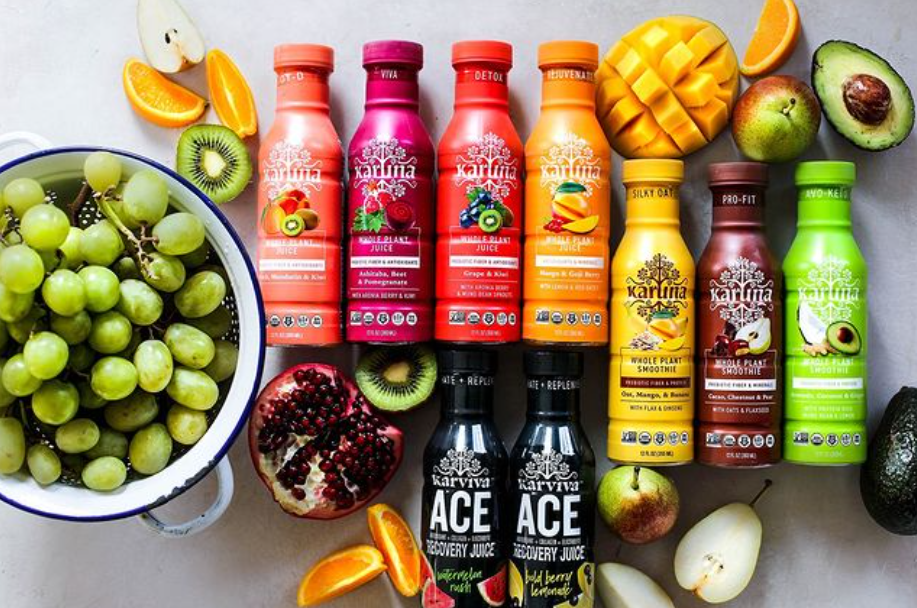 Dr. Angela Zeng is the CEO and founder of Karuna Beverages. With a Ph.D in Pathology and over fifteen years experience in the functional beverage and juice industry, she has a passion for natural healing that is rooted in her strong belief in traditional Chinese medicine and herbal sciences.

Karuna Beverages was founded in 2017, when Angela combined her love of Eastern Medicine with her entrepreneurial spirit. As a Chinese immigrant who moved to the U.S. about two decades ago for her Ph.D studies and training in medical research, Angela focused on topics ranging from cardiovascular disease to cancer. Following her research training, Angela went on to earn her MBA at Washington University in St. Louis then worked in business development in a pharmaceutical company.

It was while working in the pharmaceutical industry evaluating the commercial potential of many products, that Angela began to notice something that made no sense to her: while we are getting better at diagnosing and treating diseases, people are getting sicker. 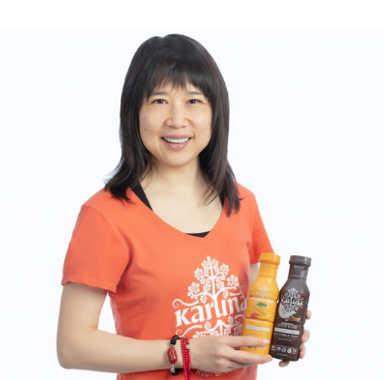 “Many disease prevalence rates have kept rising despite the improvements in healthcare. I started to look for answers, and I found the root cause has to be our modern lifestyle, in particular,  industrialized food production,” said Angela. “I was able to see the connections of regular  consumption of high sugar, high salt, and deeply processed food and chronic  inflammation, which then lead to many diseases, including diabetes, arthritis and even  cancer.”

Upon this realization, Angela combined her knowledge of Eastern Medicine, science, and entrepreneurship to launch Fulfill Food & Beverage doing business as Karuna Beverages in 2017 with the belief that Food is Better Medicine.

“The first thing that came to my mind is to develop a line of tonic as traditional Chinese medicine believes liquid forms have the strongest potency in improving health, and I chose juices and smoothies as I love fruits and I also have experience in the juice industry,” said Angela.

She created her first five drinks under the brand name, Karuna—which means compassion—and launched her product inside her local Whole Foods Market store in Missouri.

“I was very fortunate that a local Whole Foods Market store manager believed in me enough to allow me to come into his store, talk with customers myself and explain my products. Some of the ingredients in my drinks might be unusual to people who aren’t aware of the benefits of say goji berry – which has been used since the ancient days to strengthen immunity, improve eyesight and promote skin and hair health.”

Since its start, Karuna has grown from a local brand in a single store to an innovator in functional beverages with a presence in stores and online nationwide. As a brand, Karuna is fueled by a strong passion towards finding innovative ways to empower today’s consumers to make better choices to live healthier and happier lives.

Karuna Beverages now also includes a line of healthy recovery drinks for athletes and a line of alcoholic-free wine replacement juice. For athletes, Karviva ACE drinks combine antioxidants, collagen, and electrolytes and unlike other popular sports drinks, Karuna Recovery is low in sodium and calories and has no added sugar. Karviva Unwined recently launched this holiday season exclusively on Amazon and created a brand-new category as a functional alcohol-free wine replacement juice made of super-berries that help fight inflammation and relieve stress.

Karviva Unwined has already become a success and has been selected as a finalist in the World Plant Based Awards – Best Beverage 2022.

Anglea has fond memories of walking through an herbal medicine shop at age 5 where she found the aroma and experience to be absolutely magical. From that point on, she developed a deep curiosity for Chinese herbal remedies and started collecting and experimenting with herbal recipes to learn about the ancient healing art that uses the power of plants. Her own experience taught her that the journey to self-compassion should begin by feeding the soul, caring for the body, and stimulating the mind. Karuna strives to cultivate harmony for all three, by combining the simplicity of wholesome, plant-based ingredients with the innovation of modern science.

“My experience growing up in China and my education here in the United States have offered me a wonderful view of both ancient wisdom and modern medicine. I  have combined the years of knowledge I received about Traditional Chinese medicine with the lessons I acquired through my studies.”

Over the years, Angela has worked to surround herself with people who believe in her products and mission. Initially, some advisors wanted her to market her products solely to the Chinese community. However, Angela felt strongly that her health-focused drinks were for anyone seeking good health and she was determined to provide a better plant-based functional beverage than what was out in the market.

Competing with other competitors who are backed by powerful legacy brands in the Consumer Packaged Goods (CPG) market is not easy. Angela quickly learned that the war on the shelves can be fierce and sometimes it is not quality that wins shelf space but rather the money behind it.

“This can create strong hurdles for young emerging brands, especially  those owned by minority women, to overcome due to the perception that women of  color lack understanding of the culture and needs of mainstream consumers,” said Angela. “My advice is to have strong faith in yourself, be a constant learner and listener, work hard, and  believe in the consumers you serve.”

One of Angela’s personal strengths that has served her well on her entrepreneurial journey has been her ability to seek out and form partnerships with those who will help her achieve her company’s mission. She has grown her network of supporters through social media and other channels, putting in the hours traveling and seeking opportunities to get the word out about her company, its mission, and the work they are doing in the community.

And the hard work has paid off. Karuna Beverages has been recognized with a variety of innovation awards within the food and beverage industry from the Expo West NEXTY Awards to the World Food & Beverage Innovation Awards. Recently, the Higher Education Channel did a profile on Angela which won a 2021 Regional Emmy Award, and she was also featured on the PBS show “Food is Love.”

These recognitions are markers of success, showing how hard work, passion, and dedication have helped grow a brand that started in one Whole Foods store to be recognized nationwide and an innovator in the world of food and beverage. Still, the true success is measured beyond awards, in the brand’s mission to cultivate harmony in mind, body, and soul and empower consumers to make better choices to live healthier and happier lives.