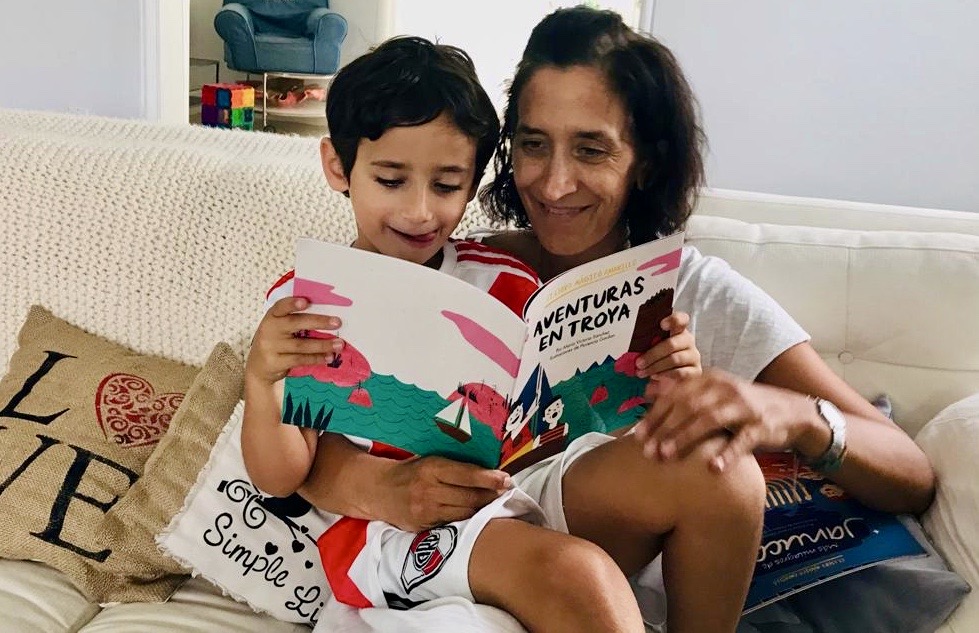 Maria Victoria Sanchez is the creator and founder of Libro Magico Amarillo, a publishing company that creates personalized Spanish children’s books. Her books offer a mix of adventures and educational content that keep children engaged and reading longer, all while playing and having fun. Her books also serve as a tool for parents raising bilingual children, helping them foster a love and appreciation of Hispanic language and culture in their children.

Rediscovering the magic of stories

Libro Magico Amarillo officially launched in June of this year, but before that it spent 30 years simply being a dream in Maria’s mind. Creating Spanish children’s books was something she always thought of doing but procrastinated for many years, never knowing when was the right time to start. As a child, her mother instilled in her a love for reading and writing. Stories were magical and they became her greatest passion as a child. However, as she grew up, the magic spark receded in her mind. She let her dreams of telling stories fall away to a small corner of her mind where she would think of the idea from time to time but never act on her dream.

Before Maria would make her book business a reality, she first spent a good portion of her professional life having a successful career in the corporate world. Born in General Roca, Rio Negro, Patagonia, Argentina, Maria earned her degree in law. After graduating from law school in Argentina, she then came to the U.S. to do her Masters at Harvard Law School.

“I worked for big names in the corporate world including Greenberg Traurig, JP Morgan, and Mastercard. I got to live in different countries and travel extensively. But with the arrival of my two children, I realized that I was no longer interested in corporate life or business trips,” says Maria.

With her priorities shifted, Maria did some soul-searching to figure out what she wanted to do next with her career. She was searching for the magic spark. She soon found it in one of her earliest loves: stories. Maria realized that happiness for her also meant doing things that had a social impact. Libro Magico Amarillo would provide her with the platform to do just that.

Maria officially began working on making her dream a reality a year ago. At the time she had no knowledge of the industry, e-commerce, or digital marketing. It was completely new territory.

“I had to start from zero,” she says, “but I decided that it was now or never and that I did not want to die without having tried to build my own business venture.”

Over the next year, Maria met with illustrators, printers, writers, and delved deep into the amazing world of book publishing. She faced some obstacles along the way, from not having access to lines of credit or a name in the industry to other entry barriers such as the high cost of marketing and having to make tough choices because of limited funds. Then of course there was the Covid-19 pandemic which threatened to halt the process and launch of Maria’s dream venture.

“The pandemic was not going to stop me,” says Maria. “It has certainly created hiccups, but also it has proven to be an opportunity for connection.”

Launched on June 6, 2020–what would have been the birthday of Maria’s late mother–Maria’s personalized Spanish children’s books have served as a bridge to connect family and friends during the pandemic. Family members can gather together virtually to read together and share stories, all while helping to foster a child’s bilingual education and growth.

Sharing the magic with others

Maria’s driving force through the struggles was her love for books and her desire to make an impact. One of the ways she’s using her platform to help others is by donating a percentage of all new profits to JAFCO, an orphanage that is doing great work for children. The other main area of impact for Maria is in education and sharing the magic of stories with others while also helping parents raise bilingual children and foster an appreciation for Hispanic language and culture.

“As a mom, immigrant, raising bilingual children, I bring a new angle to children’s books, focusing on the Spanish language, with stories thought and written in Spanish and not just translated by AI,” says Maria.

Her books bring Hispanic values and culture to bilingual children and act as an educational tool for parents who want to instill a love and appreciation for their home culture in their children.

Libro Magico Amarillo’s books keep children engaged and by making the children themselves the protagonists of the stories. The personalized Spanish children’s books allow parents to customize the books with their child’s names and each book is printed on demand so that each child receives a carefully designed adventure personalized just for them!

The books also cover a variety of topics including history and geography, which allows children to learn as they play.

Recently, one young reader shared a video with Maria of her reading experience. In the video, the 3 year-old and her mom were reading Adventuras en Troya together for the fourth time and she was so excited and engaged, asking questions about the story.

“The little one was asking her mom, “Tell me about Menelao!!!” He was the King who was married to Elena, who was kidnapped by Paris, giving origin to the Trojan war. That just made my day,” says Maria.

Most 3 year-olds are not asking about characters from ancient Greek stories, which just shows the amazing power of reading and storytelling. Libro Magico Amarillo’s books immerse children in fun, educational stories and take them on adventures all over the world–literally, since the books characters are personalized based on the child.

Finally, Maria is also using her platform to uplift other entrepreneurs. During her journey, she had many supportive people to uplift her along the way and she wants to pay it forward.

“I want to be an advocate for the need to provide more support to local business owners and entrepreneurs who do not have access to the same loans or health insurance as others.”

Maria knows how beneficial it is to have a strong support system and mentors when starting out. To aspiring entrepreneurs she says, “First, count on me, give me a call! I’m happy to pay it forward. Additionally there are a lot of women networks or alliances of fantastic ladies who are doing the same or have done it before and want to help you. Second, believe in yourself. The sky is your limit. Do not let them tell you otherwise. Third, think of how you want to be remembered. I want to be remembered as someone who was not afraid of a challenge or giving a shot to impossible dreams.”