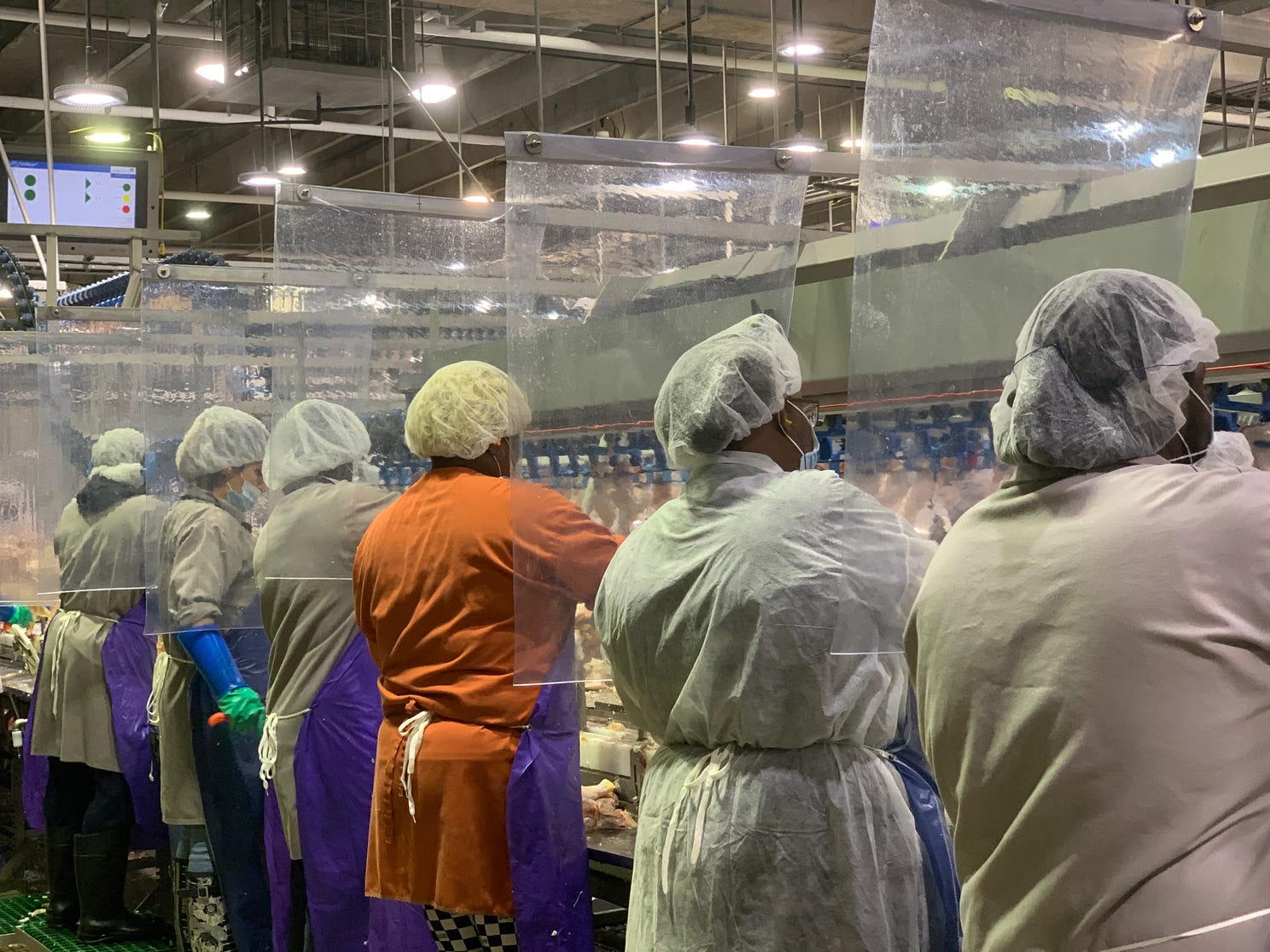 When you are enjoying your barbecue chicken or chicken wings this Memorial Day weekend, take a few seconds to think who has made this possible for you. Latino workers employed at poultry farms are subject to discrimination, exploitation and marked wage discrepancies working in inhumane conditions. Now, they are suffering high impact COVID-19 contagion. 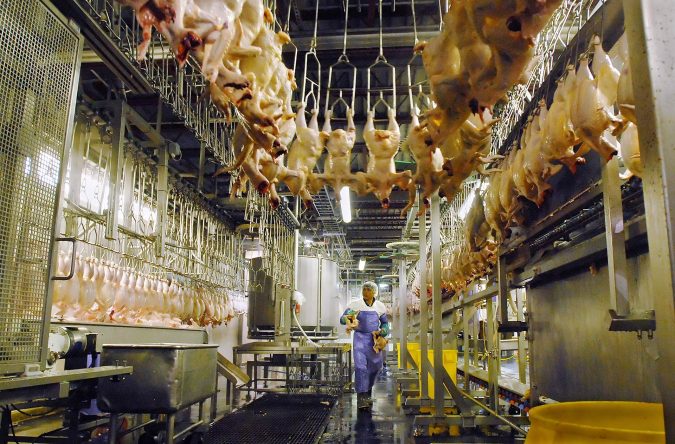 A report from the US Centers for Disease Control and Prevention (CDC) looked at Covid-19 cases among US workers in 115 meat and poultry processing facilities across 19 states. It found that among approximately 130,000 workers at these facilities, there had been 4,913 confirmed cases of Covid-19 and 20 deaths.The shocking videos released by Oxfam America about Latino workers’ exploitation at poultry farms all over the country may appear as a surprise for many Americans, but in reality this type of abuse has been going on for decades.

Latinos make up the majority of the labor force in the American meat industry. Most of these Hispanic workers are new immigrants afforded few job opportunities in rural America. They take on jobs Americans do not want –and work in beef, pork or poultry farms ranks as one of the least desirable jobs.

The complete report reveals the inhumane conditions that Latinos are exposed to in poultry farms all over the USA. Conducted by Oxfam America, a global organization working to advocate against poverty, hunger, and injustice in over 90 countries, their researchers and reporters show the deplorable work conditions these unfortunate workers have had to endure on a daily basis over a 3-year period of investigative reporting.

Working in the poultry industry is not only physically demanding but extremely dirty. There is risk of disease and injury; the environment is hot and humid and the stench is unbearable. Just imagine the amount of fecal waste produced daily by thousands of chickens.

What Latinos and other workers endure very day

Among other shocking details, the released video reveals workers at these plants wear diapers because they are not allowed to take bathroom breaks or have a law-mandated downtime to drink or eat. Many urinate and defecate while standing in the line and are not allowed to drink fluids despite working in unbearable hot environments.

Besides suffering humiliation, these workers are also susceptible to seriously health problems from inhalation of aerosolized bird fecal material and coming into contact with feathers. Most of them do not wear protective gear.

Many women also work in such environment and sadly, during their menstrual periods, are also denied the law-mandated breaks as supervisors are under constant pressure to maintain a certain speed of production.

Latinos interviewed for the report said that working at poultry farms was often life threatening, living in constant fear of losing their jobs, working while sick or injured or even with the threat of being turned onto immigration authorities.

Last week, John Tyson, chairman of the board with Tyson Foods Inc, took out a full page advertisement in the New York Times, The Washington Post and The Arkansas Democrat-Gazette to express his concerns about the food supply chain: “Millions of animals – chickens, pigs and cattle – will be depopulated because of the closure of our processing facilities. The food supply chain is breaking,” he said. Mark Jordan, executive director of LEAP Market Analytics, said chicken production was currently 15% down while beef and pork had been affected even worse with production 30% lower. (Cited on PoultryWorld.com)

The poultry farms investigated in the report included Tyson foods, Perdue Farms, Sanderson farms and Pilgrim’s Pride. This industry made $32.7 billion in 2014 and each year the profits have been increasing. Yet little is spent on improving the working environment or offering health benefits to these workers. 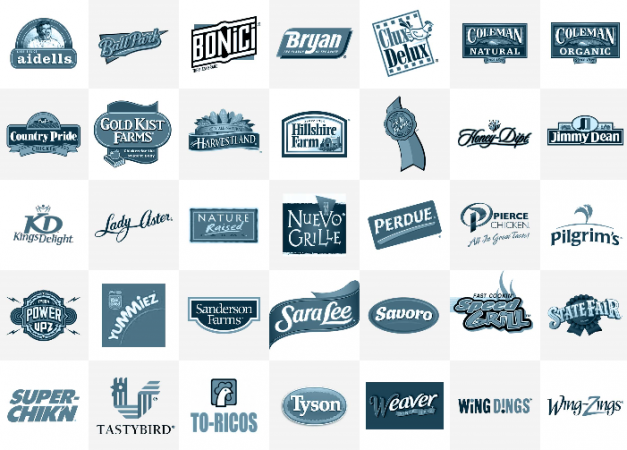 There are an estimated 300,000 Latino workers in 174 factories but documenting their background is difficult. In general most poultry farms workers are undocumented young male Latinos.

The majority of plant workers are non-unionized and many are totally unaware of US labor rights.

Other complaints noted direct discrimination, dead-end jobs with no improvement opportunities and lowest pay in the industry –often worse for undocumented workers and refugees. The majority of these workers are paid through a cash system and no health benefits are offered.

Despite these poultry farms workers suffer a number of injuries at work while hanging, cleaning and cutting the poultry, the majority had no sick days off or health benefits. The US Department of Labor officially classifies poultry as a “hazardous industry” and has calculated that poultry workers are injured five times more than workers in other industries.

Responsibility starts from the top down

Oxfam America’s report also revealed the abusive conditions in which these workers are not only granted no benefits but also are stripped of dignity through name calling, screaming and bullying by managers. Women also complained of sexual harassment from managers who do not take the complaints seriously or just tell them to leave. 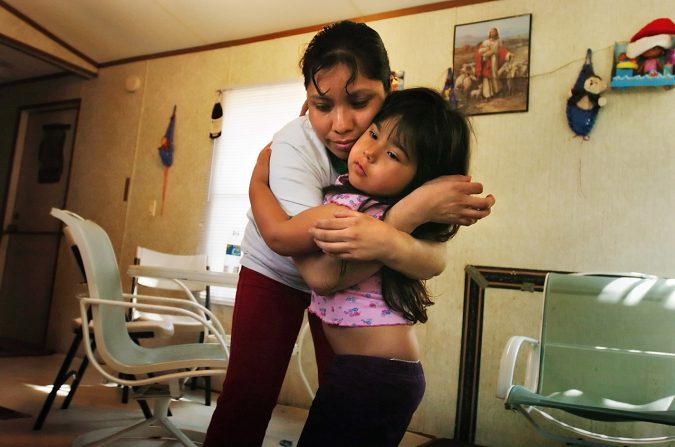 Anecdotal reports of abusive behavior in the poultry industry have persisted by decades but so far the authorities have just turned a deaf ear –after all these are only “expendable” workers who can quickly be replaced.

The solution is not simple without comprehensive immigration reform and labor law enforcement. Large corporations hire these “invisible” undocumented workers, a condition that makes abuse and exploitation possible because these workers have no rights other than those of human decency.

So far, the Department of Labor at a federal level has not made any statements regarding these allegations but if past history is true then the trend will continue. This is not only a unique problem to the poultry industry as Latinos face abuse in many industries.

In 2009, the Department of Labor filed a lawsuit in the U.S. District Court for the Northern District of Alabama. The federal department alleged that Tyson Foods did not keep accurate records and failed to pay production line employees for the time they spend donning and doffing safety and sanitary gear, and performing other related work activities. The violations covered the period from the year 2000 to the present and affect approximately 3,000 current and former workers at the plant.

The initial investigation began in April 2000 as part of the department’s Wage and Hour Division’s poultry enforcement initiative. The Labor Department filed the district court complaint in May 2002 following the company’s failure to comply with the law and to pay back wages. The first jury trial, which began in February 2009, ended in a mistrial. The Labor Department chose to pursue a second trial in August 2009 to secure a ruling that Tyson was failing to compensate its employees lawfully.

At the time, Secretary of Labor Hilda L. Solis said, “This is a victory for workers, and the result of years of dedicated efforts to protecting the rights of working Americans on the part of attorneys, investigators and others within the Labor Department.”