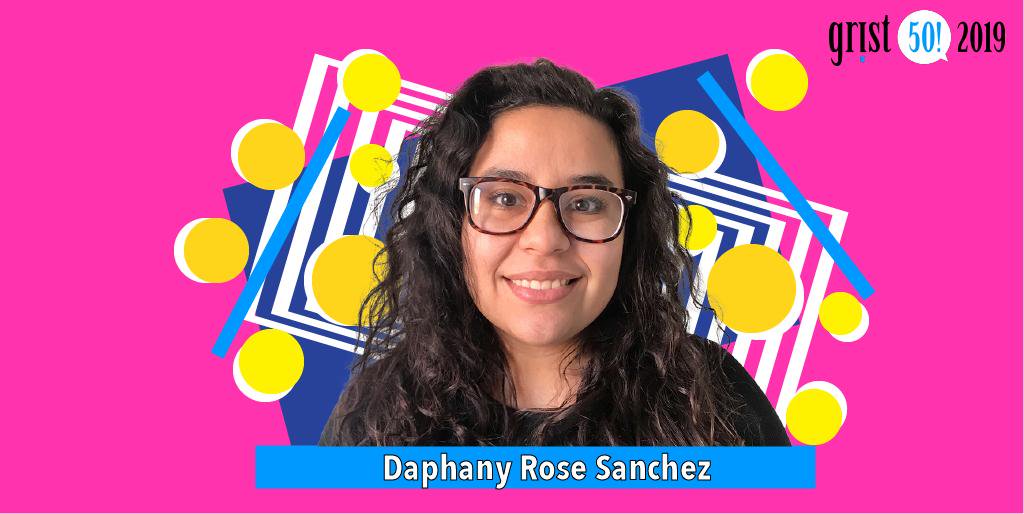 Energy democracy is a collaborative community effort focused on shifting away from traditional corporate modes of energy to energy models that are governed by local communities and are environmentally conscience. Daphany Rose Sanchez is an advocate for energy democracy responsible for creating Kinetic Communities Consulting and one of the 50 winners of Grist50!

Each year, Grist -a nonprofit news organization for people who want a planet that doesn’t burn and a future that doesn’t suck- searches high and low for the most inspiring innovators and do-ers working on fresh solutions to the planet’s biggest problems.

The result is a collection of 50 Fixers working to build a sustainable world that works for everyone. Solutions come in many shapes and sizes: exciting technologies, smart campaigns, forward-thinking legislation, innovative products, courageous organizations. Fixers vary, too; they include farmers, entrepreneurs, comedians, activists, scholars, scientists, and more. Kinetic Communities Executive Director, Daphany Rose Sanchez is one of#Grist50 2019! Congratulations to all #Grist50 fixers!

Founded in 2017, Kinetic works at the crossroads of affordable housing and energy efficiency, serving low- to moderate-income New Yorkers through education, networking, and making opportunities easier to understand. Daphany, a New York City public housing resident, is passionate about ensuring that all New Yorkers preserve their homes through energy democracy.

Daphany has always been an environmentally conscience person, but her experience during Super-storm Sandy was the major turning point in her career that led Daphany to pursue a collaborative approach to her work in the energy field. After the storm she witnessed how engineering companies and community organizations worked together to help people rebuild. It was then that Daphany realized that what needed to be done was not build something new, but merge existing markets.

She decided to adopt this model of community collaboration and energy democracy for her work in the energy field. Her main goal is to give under-served communities a seat at the table in the fight against gentrification by reducing New York City’s contributions to climate change.

Challenging the status-quo with an energy democracy model

Through Kinetic Communities, Daphany has been able to challenge the status-quo when it comes to energy efficiency.

“Our perspective accelerates clean energy implementation with existing communities that are not traditionally engaged,” she explains. “I have been able to design programs focused on reducing harmful air pollutants, increase visibility for the elderly, and promote job creation for people of color regardless of their socio-economic class and education.”

These experiences have propelled Daphany forward in her journey to spread energy democracy. In a male-dominated industry, Daphany leads the charge in energy democracy for under-represented communities in New York.

“As a minority and a 4-foot-11 woman, I often face validation challenges from industry professionals,” says Daphany, describing the obstacles she has faced.

Reaching where she is today has not been easy. Growing up she took on many student loans just to have an opportunity to have a seat at the table with other decision makers. She has faced people questioning her validity and position as a leader in her field. Yet she has not let these challenges deter her from her goals.

“Instead of feeling oppressed, I became obsessed with having a catalytic impact on breaking stereotypes,” says Daphany.

Daphany chooses to focus on her strengths and use her skills to effect change. Her skills of perception, creative collaboration, and community intuition have been essential skills in leading New York toward a climate neutral environment. These are skills that have been ingrained in her since childhood. Daphany believes that working collectively as communities is the key to addressing important issues such as systematic housing injustice, economic development, and environmental sustainability.

A vision for New York’s future 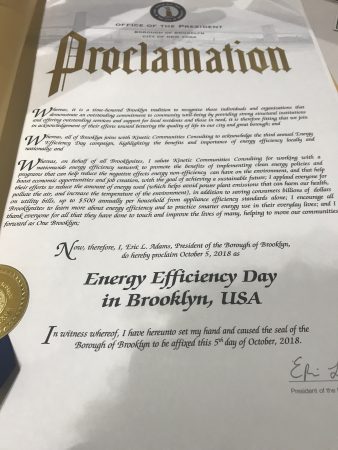 “My vision of New York’s future is an equitable carbon neutral city,” say Daphany. “One where organizations work side by side, and community members are empowered to take hold of their energy democracy without burden of stereotypes directing their lives.”

Daphany’s work in promoting energy democracy is making great strides in actualizing that vision. Her accomplishments thus far include being recognized as one of Grist50!, collaborating with NYCHA to create rooftop gardens at 24 buildings in 8 developments, creating green jobs for NYCHA residents, and organizing efficiency awareness campaign events that provide active workshops on energy efficiency. Additionally, Kinetic Communities has joined a national campaign which collectively reached 58 governments, 358 organizations, and 80 million residents in the country. Through the efforts of this campaign, the Brooklyn Borough President announced October 5th as Brooklyn’s Energy Efficiency Day. These experiences have only emphasized the importance for collective action in the energy field. Through collective community efforts change can be effected.

As parting words of advice to others looking to effect change in their careers, Daphany encourages people to find mentors and be curious.

“Explore how other new businesses are implementing their products and learn from their opportunities how you can be different and excel in the future,” she says.

Finally, she encourages people to see their that persistence and risks are worth it. The opportunities for change and success are limitless through learning and accessibility and Daphany hopes to continue to make opportunities available to under-served groups through her own work in the energy field.