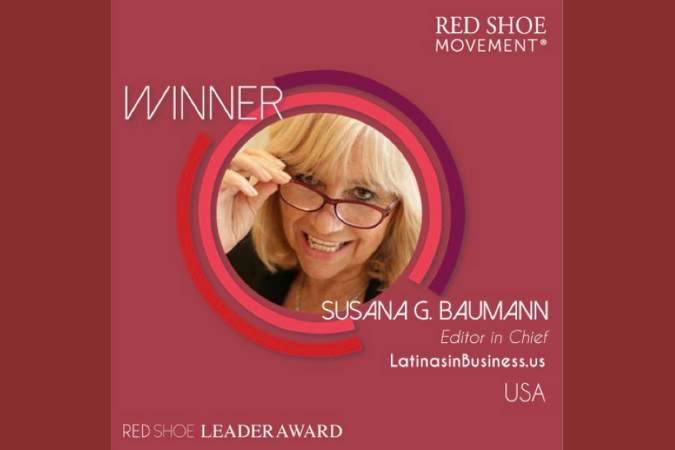 Susana G. Baumann, Latinas in Business Inc. President, CEO and Editor in Chief, was formerly the owner and Director of LCSWorldwide Language and Multicultural Marketing Communications, a consulting firm located in New Jersey, USA. Since 1996, LCSWorldwide consulted with organizations in healthcare, education, and public service to develop multicultural community outreach initiatives for the Latino market in nine states.

A multicultural marketing expert, business writer and published author, Baumann advocates for Latinos in the United States. She specialized in this market early on, when Hispanic was a “bad word” and companies would disregard the economic power of a burgeoning population.

Among her clients, she has serviced Massachusetts, Connecticut, Pennsylvania, New Jersey, Texas and California State Libraries, major pharmaceutical and healthcare corporations, and national non-profit organizations in healthcare and education. A highlight of her career was to be part of the trainers’ cohort for the Bill and Melinda Gates Foundation Spanish Outreach Program at WebJunction.com in 2007 and 2008.

Writer, editor, and publisher, she has worn almost every hat in the media industry and has managed publishing and production crews. In 2002, Susana launched the first bilingual newspaper in New Jersey, Periódico Latino!, featuring news and stories to promote the achievements of Latinos in the Garden State.

Travelling frequently to Latin America, she has interviewed Latin American and US Hispanic-American top corporate executives and government officers to develop success stories, trends, industry updates, and company profiles for trade magazines such as US Industry Today and Latin Trade.

Her book, ¡Hola, amigos! A Plan for Latino Outreachwas published in 2010 by Connecticut publisher ABC-CLIO Inc., and acclaimed by specialized reviews.

“Whether it’s used in whole or chapter by chapter as needed, the combination of information, ideas, worksheets, and rich access to bibliographic source material creates a potent tool for beginning and enriching outreach programming to the Latino community. This is indeed the centerpiece of the publisher’s Latinos and Libraries series.”
—Booklist Online

Baumann received the LISTA Summit and the Latina Excellence Award at 2015, TECLA Award for Best Business Blogat Hispanicize 2015, and was invited to become a media member of the NAA American Latina Leadership Caucus. In 2017, Susana was named a 2017 Latina of Influenceby Hispanic Lifestyle Magazine and in 2018, received the Red Shoe Movement “Leaders Who Walk the Walk” Award.

In 2013, she was named “Journalist of the Year” by the Statewide Hispanic Chamber of Commerce of New Jersey for her service and advocacy to Latino small businesses, where she has been a speaker several times. She has also been a speaker at Jacksonville University Media and Communications Series, the 2017 Prospanica National Conference, the LEAD Conference for Latina students at Harvard University and the P.O.W.E.R. Women’s Summit in Newark, NJ.

She has been featured in several national media outlets including Abasto Magazine, Huffington Post, Negocios Now, and has been a guest to TV and radio programs including the Joe Torres TV program Tiempo at ABC News and several times to Contigo en la Comunidad at Univision 41.