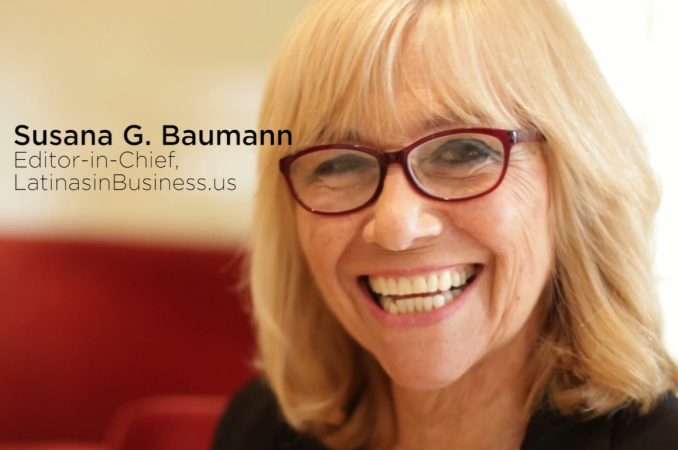 Advocating for Latinos in the United States, she specialized in this market early on, when Hispanic was a “bad word” and companies disregarded the economic power of a burgeoning population.

Through her company LCSWorldwide, founded in 1996, Susana has worked with government agencies, non-profit organizations and corporations in nine states to improve their influence in the Latino market through strategic outreach planning and implementation, staff and organizational development, marketing and promotional multicultural campaigns, language and cross-cultural training, event facilitation, and fundraising and grant writing.

Writer, editor, and publisher, she has worn almost every hat in the media industry and has managed publishing and production crews. In 2002, Susana launched the first bilingual newspaper in New Jersey, Periódico Latino! Travelling frequently to Latin America, she has interviewed Latin American and US Hispanic-American top corporate executives and government officers to develop success stories, trends, industry updates, and company profiles for trade magazines such as US Industry Today and Latin Trade. Her book, ¡Hola, amigos! A Plan for Latino Outreach was published in 2010 by Connecticut publisher ABC-CLIO Inc.

In 2014, she launched LatinasInBusiness.us, an online platform dedicated to the economic empowerment of the Latina working woman that has received the attention and support of Latina leaders around the country including the United States Hispanic Chamber of Commerce Foundation, the New America Alliance (NAA), and the National Latina Business Women Association (NLBWA), among others.

“I’ve struggled with the triple qualifier: Being an immigrant, a Latina and a woman running my own business. My mission now is to help women accomplish their goals while avoiding the obstacles and challenges I had to face when I began my business over 20 years ago.  They can start their journey to success by taking control of their story and networks to achieve their career or business goals,” Baumann said.

She is or has been an active member of several national and regional Latino organizations and has opened many doors to other Latinas. She was an Ambassador of the  Statewide Hispanic Chamber of Commerce of New Jersey, a member of the American Association of University Women – Spanish Chapter, an active participants in the Diversity Committee for the American Library Association, REFORMA (The National Association to Promote Libraries to Latinos and the Spanish-speaking) , and the National Association of Hispanic Journalists.

She was a Board Member and Chair of the Planning and Programming Committee of the Hispanic Affairs and Resource Center of Monmouth County for several years and the Red Bank Education and Development Initiative. Due to her participation in the initiative’s several projects to achieve a more inclusive education of minority children in the area, she received the “Volunteer of the Year Award” in 2004.

Baumann has been “first” at many positions in government and non-profit sector. In 2003, she was appointed as the first Latino member of the Red Bank Borough Human Relations Committee. She became the first Latino member of the Monmouth County Arts Council Diversity Committee. In 2013, she received the “Journalist of the Year” award from the Statewide Hispanic Chamber of Commerce of New Jersey for her service and advocacy to Latino small businesses.

For the quality of her work with LatinasinBusiness.us and commitment to her mission, she has received several recognitions including awards from L.I.S.T.A. Latinos in Technology, Hispanicize, the Red Shoe Movement, and Hispanic Lifestyle Magazine, among other national and regional organizations’s recognitions.

Baumann emigrated from Argentina to the United States in 1990. In her country of origin, she was a tenured professor of Architecture and Fine Arts at the National University of Rosario, Argentina. In the United States, she obtained a Master’s of Arts in Liberal Studies, and taking advantage of her polished bilingual language skills, she pursued a career in communications, publishing and marketing.

Effective strategies to tackle stress in the workplace with COVID19