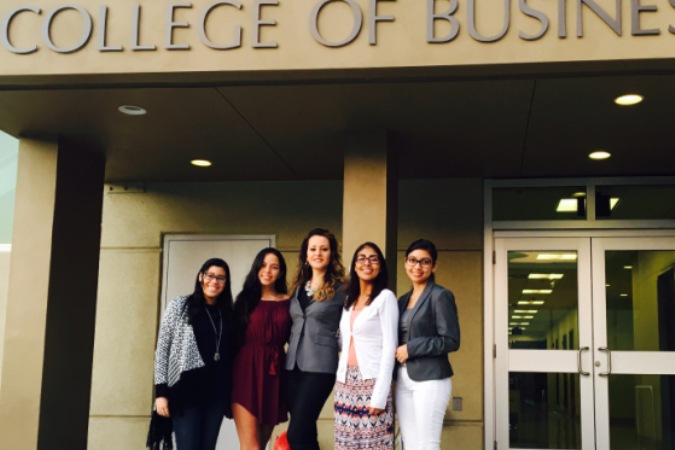 As many immigrant Latina entrepreneurs, Ana Larrea-Albert has continued to reinvent herself  from one business venture to the next and the key reason for her rapid growth is her unrivaled record of giving back to her community, often incubating future generations of Latina entrepreneurs and corporate aspiring leaders.

For most Latina immigrants, there are obstacles from the very first day they arrive; they face barriers in language, lack of access to healthcare, discrimination and exploitation, and have access to few or no resources. Amidst this gloom and despair, every now and then, one Latina makes it big and opens the door for others to achieve their dreams. And this one person is Ana Larrea-Albert, a Latina who is not only making a name for herself in the world of entrepreneurship but most important, she is willing to share her success.

Ana was born in Quito, Ecuador and then at a young age moved with her family to Florida. She obtained her MBA from Florida Atlantic University in Boca Raton, where she specialized in international business. Today, in a promising corporate career, Ana Larrea-Albert is vice president of Marketing and Customer Experience at ALMACO Group.

“My journey in the world of mentorship started a few years ago when I realized that there was a severe shortage of Latinas in corporate America,” she told LatinasinBusiness.us.

She then created NENANI, an online platform that aims at elevating the profiles of other successful Latinas who are contributing to their communities.  Through this website, she has opened a pipeline to mentor young Latinas as future leaders and entrepreneurs.

In addition, through her Human Accelerator Program, she also spends time coaching successful female executives so that they can reach their maximum potential. Ana realized that just like her, Latinas by virtue of their ability to speak at least two languages and their entrepreneurial spirit, could become major players if they were provided with the opportunity.

The inspiration behind NENANI were Ana’s own struggles which she faced when she first entered the corporate world but rather than being defeated by negative comments, she actually thrived and overcame adversities.

Today, through NENANI, Ana is fulfilling her dreams of making a global change by regularly featuring up and coming Latinas who not only have achieved success but who are also making their contributions to society, irrespective of their political affiliations.

Ana’s biggest motivating factor has been her desire to succeed at all costs. Like most spirited Latinas, Ana has never been afraid to take risks. When going beyond her comfort zone, excitement and courage has allowed her to achieve more and led to greater personal satisfaction. Lastly, she feels that the key reason for her success has been an unquenchable thirst for learning and wanting to constantly absorb the world’s knowledge.

However, Ana is fully aware that to make a significant change in the lives of Latinas, she needs to network with and prepare these women with leadership qualities at a much younger age. She is a firm believer that NENANI will enable her to reach the masses and help most of them achieve their dreams. She has now partnered with Florida Atlantic University’s Mentoring Project to reach Latina students and give them the tools necessary to become successful leaders and entrepreneurs.

“Everyone should take on a mentorship role.” And she added, “We don’t need to have a C-level title or have several decades of expertise. We each can be that guiding light to someone who looks up to us or could learn from our experience. Mentor someone in your office, students at your Alma mater or even family members, all of which I do. In turn, you will learn so much from your mentees; you will feel inspired and proud of your mentee’s progress. The more comfortable we become with the role of being mentors, the easier it will be for the next generation to find a helping hand. Let’s create a culture of mentorship so that nobody needs to look desperately for that perfect mentor,” she stated.

Ana currently sits on the Think Freely Latino Advisory Board, a new U.S. Hispanic and Latino outreach project focused on Latino empowerment. She has also served as a Board Member on various Latina Professional Organizations that encourage diversity and independent thought. For her work at NENANI, she was recognized as a 2017 Latina of Influence by Hispanic Lifestyle Magazine.

Her vision is to achieve greater levels of talented and capable Latina representation in corporate America and the Government. She is fully aware of the challenges that face her but she knows there is no turning back.

“Latinas have waited a long time and have started to climb the corporate ladder but to get to the top, all they need is a little push, and bit of mentoring,” she concluded.

In 2011, Ana Albert-Larrea she was named Marketer of the Year for her business initiatives in Latin America. Previously, Ana has also held financial positions with the Bank of America, Morgan Stanley and a few other multinational companies.

Sign up today to receive our newsletter and you will be able to download our FREE e-booklet “Ten Steps to Happy Networking”!