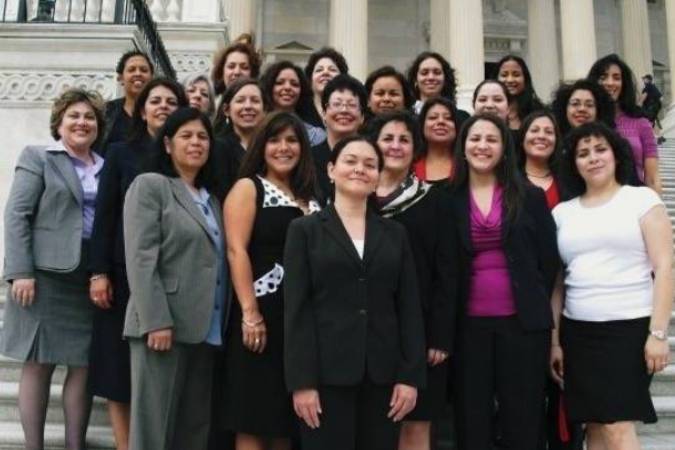 Life often is full of joy, happiness, challenges, and sadness. Through it all, life also has a wonderful way of creating pathways that cross for very deliberate and meaningful reasons. For so many of us, we were given the blessing of crossing paths with Deborah Aguiar-Vélez.

A brilliant mind and a loving soul, Deborah finds herself in that part of life’s journey that could be laden with tears and sadness. In Deborah’s life, despite the reality of facing stage 4 lung cancer, she is filling her days with love, hope, and a staunch message that life is worth living.

She has always drawn people to her and in this phase of her journey many from around the nation are flying in to Charlotte, North Carolina to pay their respects to this very special Boricua. She is preparing for the next chapter of her journey just how she has prepared for any other major project, in a pragmatic, loving, insightful way.

You see, Deborah is an engineer by training and a very successful business woman. She is also a loving wife and mother of two beautiful and talented women.

Deborah earned a bachelor’s degree in Chemical Engineering with honors from the University of Puerto Rico. In 1983 she established her own company Sistemas Corporation. The company, provides customized software and training for engineers, scientists and technical personnel for clients such as ExxonMobil, Baxter, BASF, Xerox and Colgate-Palmolive.

Deborah promotes financial independence as an engine for growth

Nielsen’s Monica Gil shares that, Latinas are “ambicultural, technologically-savvy, and a growing economic engine”. With 86 percent of Latina women Nielsen surveyed leading the big purchasing decisions in households, including cars and homes; times are changing and economic power is shifting. “Latinas are a youthful demographic – 60% are under the age of 35–, and are increasingly adapting to all types of technology at a higher pace than other U.S. women”, Gil says.

We met Deborah in 2009 in a national Latina executive leadership program, the National Hispana Leadership Institute (NHLI). In our first weekend together, strangers became sisters – hermanas. Deborah, the most successful business woman in the group, immediately volunteered to present a session on financial savviness. We were all grateful to hear her very practical advice. The message was simple, Latinas need to be financially independent. We need to save more. Money is power.

Making an impact in other people’s lives

A woman of faith, Deborah believes she has been given a gift to know she has a short time left. She is using it wisely, sharing with others her journey and allowing friends to travel from all over to say goodbye. She says she is very surprised at all the people that are reaching out from the past and would never have guessed the impact she made on so many. This has made her realize that every person matters, that we are all able to touch people’s lives directly and indirectly, that we matter to one another — no matter how long ago we met.

We are grateful to have met Deborah Aguiar-Vélez. She has left an indelible mark on us and so many across the United States through both her professional and personal endeavors. With pride, we celebrate Deborah and the legacy she created through her life’s work. As her hermanas we commit to share Deborah’s message on her birthday each year on the need to save and become financially independent. Thank you Deborah for your empowering message, you are loved, respected, and will not be forgotten.

One thought on “Deborah Aguiar-Velez empowering Latinas toward financial independence”