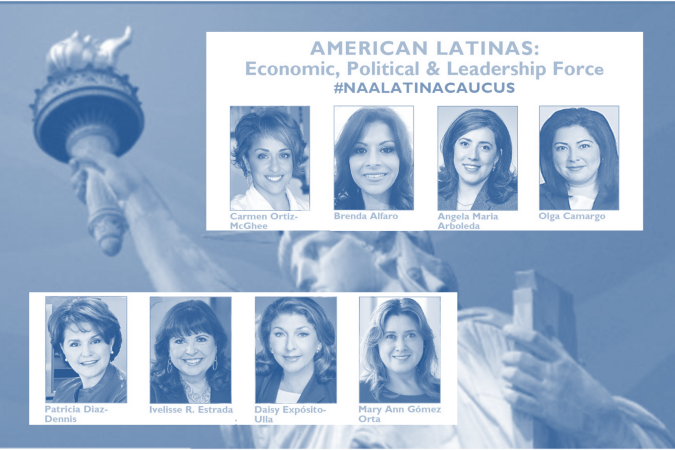 An outstanding lineup of American Latinas representing the economic, political and leadership force of the female Latino community will meet at the New America Alliance 16th Wall Street Summit once again on October 5th in New York City.

The initiative was launched for the first time in 2014. The New America Alliance (NAA) brought to the forefront an exclusive panel of powerful American Latinas in recognition of the advances of Hispanic women in business and the workplace, and as a result, the American Latina Leadership Caucus was born.

This year, the organization made emphasis in structuring the initiative at a national level, naming co-chairs for every region in the country.

Drawing upon a successful thirty-year trajectory in commercial banking, marketing communications, international trade and community service, Ana Maria Fernandez-Haar is now an investor, grantor and pro-bono consultant to non-profits and minority-owned small businesses in a variety of industries including publishing, airport retailing, financial planning and professional services.  She is a motivational speaker and coach to Latinos through her weekly radio show on Univision Radio/South Florida, El Arte del Triunfo/The Art of Success and through a live seminar series based on the program.

NAA Inc and NAA Institute Board Member and Co-Chair American Latinas Caucus; Co-Chair, Marketing & Communications Committee Carmen Ortiz-McGhee is Senior Vice President and Head of Sales for Aon Risk Solutions (ARS) – The Capital. In this role, she is responsible for driving growth and market penetration for ARS throughout Northern Virginia, the District of Columbia and Maryland. Before joining ARS, Carmen served as Executive Vice President of Sales for Aon Cornerstone Innovative Solutions.

Cacho founded Finding Productions, a media and macerating services agency with an expertise in commercials, infomercials, corporate videos, music videos, events, TV direction and productions, media buying and advertising campaigns. Through Finding Productions and with the support of the company’s president Thene Mucino, Cacho developed “Triunfadores Latinos con Jackeline Cacho”, an independent program transmitted on Mundo Fox 22 and Super 22.2 since April 2012. Over the years Cacho has served as a Latina leader that encourages the Latino community across the nation to be leaders in their own right.

The Emmy Award-winning producer and advocate for gender parity, Cuban born Nely Galán started at the very bottom when her parents were forced to leave their country of origin and migrate to the United States. She worked her way up to become the first female president of entertainment of a U.S. Hispanic television network (Telemundo). Although a big achievement in her life, she did not feel satisfied until she became successful in her own terms by building a real estate empire and a global multicultural media company that has created over 700 television shows and helped launch 10 channels around the world. Always looking for purpose in her life, she then started The Adelante Movement (“Move it forward!” in English), a non-profit organization sponsored by The Coca-Cola Co., which kicked off in 2012.

Mary Ann Gomez joined the Congressional Hispanic Institute (CHLI) as its Executive Director in 2011. Prior to joining CHLI, she was the Executive Director of the National Association of Hispanic Publications. She is former corporate marketing manager with Coors Brewing Company and McDonald’s Corporation. She managed multi-million advertising and marketing campaigns, collaborated with advertising and public relations firms as well as multi-lingual broadcast, print and outdoor media to executive local, regional and national promotions.

Elizabeth Oliver-Farrow is President and CEO of The Oliver Group, Inc. (OGI), a Washington, DC-based public relations and government policy consulting firm where she works with senior executives on outreach strategies. She formerly operated another communications firm for 29 years after having served previously as an entertainment industry publicist and as Director of Public Relations for Playboy Clubs International. She brings 40 years of public relations and outreach experience for corporate, trade and federal clients. Ms. Oliver-Farrow, a Puerto Rican born in the South Bronx, has a commitment to empowering, educating and advocating for women, youth, and the Hispanic business community.

Veronica Torres currently works for the Dallas Convention & Visitors Bureau as the Director of Business Development. Veronica currently serves as the President of the Hispanic 100 board of Directors and is a member of the Young Latino Executives, the Mayor’s Star Council Advisory Board, the Hispanic Women’s Network of North Texas, the Greater Dallas planning Council, LATISM (Latinos in Social Media- Dallas Chapter), and is Co Chair of the Girls Inc. Champion for Girls Program.

Rebecca J. Viagran was elected to City Council District 3 in May 2013 and re-elected to the office in 2015. Aside from being directly involved with city government, Councilwoman Viagran also has experience working with community organizations and volunteering for important causes. She served the San Antonio Hispanic Chamber of Commerce as Vice President of External Affairs and worked as the Director of Government and Community Relations for Mexicans and Americans Thinking Together (MATT).

Patricia Diaz Dennis is also a trustee of the NHP Foundation, a member of the Advisory Boards for LBJ Family Wealth Advisors and Western Governors University Texas, and is Chair of The Global Fund’s Sanctions Panel. She was a SVP & Assistant General Counsel overseeing various legal matters for the company originally known as SBC Communications (which became AT&T) from 1995 to 2008, when she retired. Ms. Diaz Dennis received three Presidential Appointments. From 1983 to 1986, President Ronald Reagan named her a member of the National Labor Relations Board. He then appointed her a commissioner of the Federal Communications Commission until 1989. President George H.W. Bush appointed her Assistant Secretary of State for Human Rights and Humanitarian Affairs in 1992.

Angela Maria Arboleda works on a variety of policy issues for the company and serves as a federal government relations lobbyist conducting outreach on Capitol Hill and the Administration. Angela joins Herbalife after a 15-year career in public service. Most recently, she served as Senior Policy Advisor for Latino and Asian-American Affairs for U.S. Senate Majority Leader Harry Reid (D-NV). In that capacity she oversaw policy and political strategy impacting the Latino and Asian-American and Pacific Islander (AAPI) communities in the U.S. Prior to her time on Capitol Hill, Angela worked at the National Council of La Raza (NCLR) – the largest national Hispanic civil rights and advocacy organization in the U.S. – as Director of Civil Rights and Criminal Justice Policy. At NCLR, she was a spokesperson to both mainstream and Spanish-language media.

Ivelisse R. Estrada is senior vice president of Corporate and Community Relations for Univision Communications Inc (UCI), the leading media company serving Hispanic America. In this role she is responsible for the overall development and coordination of community relations strategies for the Company including the Univision Network, UniMás Network, Univision Cable Networks, as well as Univision Local Media, including TV, radio and digital. She coordinates all philanthropic contributions and serves as a liaison between UCI and community organizations. Estrada also plans, directs and supervises the execution of the Company’s community empowerment platform Univision Contigo which includes Education, Health, Prosperity and Civic Participation.

Read more: Ivelisse Estrada at Univision building community from a position of leadership

Daisy Expósito-Ulla is a pioneer and a recognized authority in Multicultural Marketing and brand communications. She is Chairman/CEO of d exposito & Partners. In 2015, the agency was chosen AEF Agency of the Year by the Advertising Educational Foundation, which also recognized Daisy “for her contributions to American advertising.” Prior to founding the agency, she was Chairman/CEO of Young & Rubicam/WPP’s The Bravo Group, a company she helped launch and subsequently build during her twenty-four-year tenure, becoming the largest U.S. Hispanic agency of all time.

“These women have pioneered new business models, led organizations that have set records and made history,” said Carmen McGhee, NAA Institute Chair & American Latina Leadership Caucus Chair. “These American Latina leaders have all done very well in their careers and are committed to doing good in their communities as they build and grow their legacies, open doors and make business connections for the generations of leaders that are coming after them.”

Join Wall Street Summit participants as they learn at the heels of these American Latinas business influencers.

As a LatinasinBusiness.us supporter, you can register HERE.