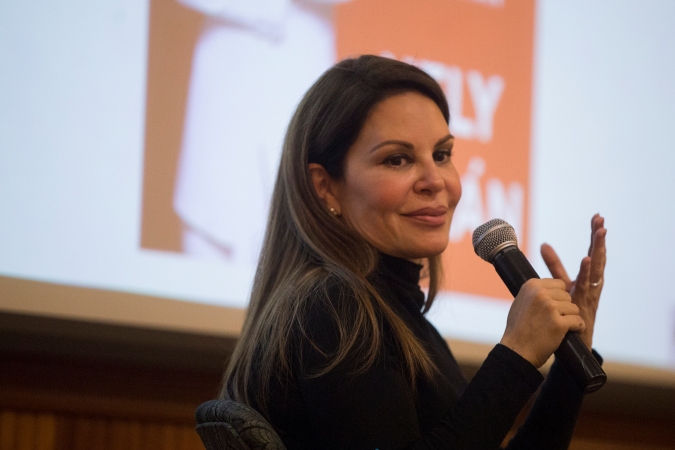 Nely Galán SELF-MADE, the inspiring story that celebrates the triumph of persistence and determination, touches the lives of thousands of women –and men- and encourages them to become rich in every way, money, family, love and abundant time to enjoy it all!

This week, entrepreneur, TV producer and real estate mogul Nely Galán launched SELF-MADE –Becoming Empowered, Self-Reliant and Rich in Every Way, her first book. Galán has made her mission to train and empower women to become successful entrepreneurs—regardless of age or background—so they too can become “self-made.”

The Emmy Award-winning producer and advocate for gender parity, Cuban born Galán started at the very bottom when her parents were forced to leave their country of origin and migrate to the United States. She worked her way up to become the first female president of entertainment of a U.S. Hispanic television network (Telemundo).

Although a big achievement in her life, she did not feel satisfied until she became successful in her own terms by building a real estate empire and a global multicultural media company that has created over 700 television shows and helped launch 10 channels around the world.

Always looking for purpose in her life, she then started The Adelante Movement (“Move it forward!” in English), a non-profit organization sponsored by The Coca-Cola Co., which kicked off in 2012.

“This book is one of my greatest achievements,” she told LatinasinBusiness.us in an exclusive interview. “It took me over a year but it is a unique tool for women to start their journey of empowerment and self-reliance,” she said.

Galán, a Psychology trained professional, nails down some of the most ingrained issues in women’s behaviors and offers profound insights into a woman’s soul. But the book is not only a soul-searching tool, it is also strategic and practical, providing tips and tricks for making money, saving money, and finding “hidden money in America,” some little known material that can push women into their self-made journey.

Prince Charming is not coming to save you

“From the time we are born,” Galán said, “we are dependent on our parents so issues of attachment are very insidious and they show up every day in our lives,” she explained. “When we are young, women have this secret expectation that Prince Charming, our husband or significant other will come and save us,” she said.

The Latina entrepreneur admits she had a turning point in her life the day she and her first husband decided to part ways and she was left with a newborn son. She remembers being in despair until a good friend told her she needed to “do the math.” She then went and made the most money she ever did in the following three years of this disappointment.

“We can also think other people or situations in our lives as being ‘Prince Charming’ for us, people or situations that will finally save us or take care of us,” she explained. “For instance, we expect our boss to notice we did a great job and reward us but reality is, they are human too!”

Galán experienced that disillusionment in one of her jobs as the manager of a small Spanish-language TV station in New Jersey, she narrates in her book. Despite her full-time efforts –“I worked 24 hours a day and had no life,” – the media company sold the station and she lost her job.

“That was another breakthrough,” she said. “Your job or the company you work for, your boss or your colleagues are not your Prince Charming.”

“By the time you are in your thirties, you have been disappointed by many people: corporations you work for, co-workers, your boss, your government, even your family and relatives. Then it is time to kill the fantasy and become your own Prince Charming,” Galán affirms. “With this book, training and mentorship, I help women to build their lives around themselves and succeed in whatever they put their mind into.”

“In your pain is your brand” empowerment for entrepreneurship

The most touching aspect of this book is that Galán explains her step by step growth as a self-reliant and empowered woman through her own most vulnerable moments. “I believe that pain is a gateway to growth,” she says in the book.

“Vulnerability is important,” she told LatinasinBusiness.us. “To be tough and strong in business, you have to recognize your mistakes and weaknesses but also own the parts you are good at,” she explains.

Being an immigrant and learning to live within a different culture put her in the best position to make a career in the Latino television market. As a woman entrepreneur, she had to struggle to be taken seriously in an industry dominated by men. When she was discriminated against, she used that pain as an unstoppable force to advocate for multicultural and gender minorities.

“Women have a great advantage as we are not afraid of talking about pain or our painful experiences,” she said. “I teach women to take their pain and build a business around it instead of thinking their pain prevents them to reach their goals,” she explains. Brilliant!

Entrepreneurship is not a short-term self-gratification road

In detail, Galán explains how to start a business that can bring financial freedom and a rich life in every way.

“To achieve this optimal state, though, you have to make hard choices and lots of sacrifices,” Galán advises. “You need to clearly define your life-term goals and work your way backwards into the present, always keeping an eye on that final end,” she said.

Through exercises and sound advice, Galán guides her readers through a step-by-step game plan that includes falling in love with saving money, getting out of debt in a realistic way, saving a year’s salary before starting their own business, and even finding hidden money in their own home!

“You need to be prepared before you start your business,” she said. “While doing it, you can start considering what kind of entrepreneurial business matches your skills, find a niche to solve a problem, and the people who have this problem,” she shared.

Access to capital and other sources of hidden money in America

For the last four years, Galán has been touring the country with her Adelante Movement and speaking with women from all walks of life. One of main issues these potential or established entrepreneurs mentioned to her is lack of access to capital.

“However, they don’t apply for the money! There are government contracts and corporate contracts that are untouched because many of these women are unwilling or unable to fill out the paperwork,” Galán said.

The Adelante Movement is working with the Small Business Administration (SBA) to solve this hurdle. “I met with Maria Contreras-Sweet, another powerful Latina who wants to give money to women entrepreneurs, and we will help them promote government contracts and ease the application process,” she announced.

The idea is to explain in detail how government contracts work but also find opportunities through her website’s resources and mentorship with companies like Wal-Mart or Coca-Cola. “You can follow a Golden Triangle Approach by researching corporate, government and non-profit opportunities through their supplier diversity programs, low-interest rate loans, and federal and state tax incentives,” she explained.

Towards the end of the book, Galán speaks with great emotion about the opportunity she had to bring Rigoberta Menchu with her on tour. In 1992, Menchu won the Novel Peace Prize for her work advocating for indigenous people in Guatemala and Latin America.

In her words, Galán describes the amazing story of an illiterate woman whose determination drove her to become a spiritual leader of a people. “Rigoberta taught me to dream big and imagine things that are not possible, and then remind ourselves that we need to ground those dreams in reality,” she said.

Galán ends her book stating that for us women, bringing life is one of our deepest urges and we have been prepared to take care of others. But now, she believes we need to create new pathways, new models for our daughters and their daughters, raising a generation that becomes self-made and changes the world around them.

“One of my strengths is that I complete everything I start. I get afraid but I don’t quit. Find the angles, build baby steps. Don’t overwhelm yourself but keep your grit, one day at a time, until you achieve the success of being self-made the way you want to be,” she concluded.

The United State of Women Summit