President Obama’s fiscal year 2017 budget proposal to increase innovation and research in support of the growing number of minority-owned businesses was announced in February of this year by the U.S. Department of Commerce, Minority Business Development Agency.

The Minority Business Development Agency (MBDA) is the only Federal agency dedicated to the growth and global competitiveness of U.S. minority-owned businesses and it is led by a Latina, MBDA National Director Alejandra Y. Castillo. We had the honor to interview her exclusively for LIBizus.

“Before we get into the 2017 budget discussion, we need to reflect on ‘where we are as a nation’, and how to look at the big picture regarding the changing demographics,” Castillo said.

Castillo was referring to the staggering growth of minority businesses at a rate of 38  percent since 2007, and reaching 8 million minority-owned businesses in 2012 (U.S. Census Bureau, Survey of Business Owners (SBO), 2012).

However, the same source reports that despite “the 38 percent increase in the number of minority-owned firms between 2007 and 2012,” the average receipts per firm declined two percent during the same period.

“There are multiple reasons why minority businesses do not grow at the rate of non-minority businesses. One of them is lifestyle. I know this first hand because my father was a ‘bodeguero.’ He grew his business enough to buy a home for the family, pay the mortgage and send his kids to college. And he was happy,” she said.

Many of these businesses making a choice to stay within a certain size or curve are usually in industries that do not require innovation and research, big data or large access to capital.

“I believe in respecting people’s choices; growth is not for everybody,” she said. “For instance, when my mother saw me working hard at reaching certain goals or positions, she would ask me, ‘¿Pero, hija, no estás satisfecha?’” she recalls.

Many minority-owned businesses face the fear of the unknown, or are culturally “engraved” by their countries of origin’s values. But when they come to the USA, they see that the sky is the limit and need help with their cultural adjustment, Castillo believes.

“So then the other reason why many minority businesses do not grow is related to their financial records. They either do not have a strong credit history, capital backing to access machinery or hire new employees, and many do not have the know-how in business networking or access to federal contracts and other opportunities for expansion,” she explained.

This is the area where Castillo believes the MBDA will take a bigger role, helping these businesses create a growth strategy to push these entrepreneurs forward. “Growth requires preparation, strategic partnerships and work,” she stated. 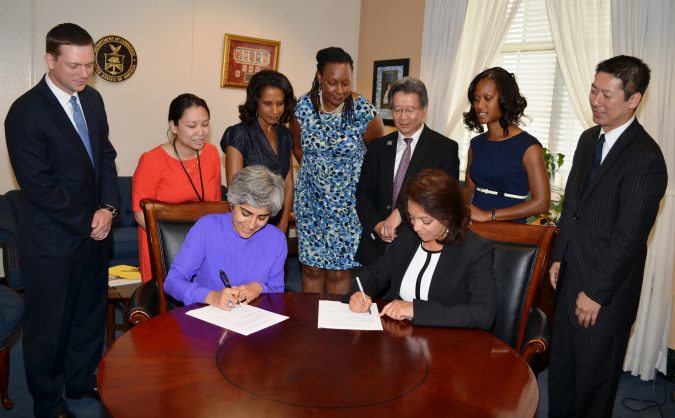 The President’s FY 2017 budget proposal requests $35.6 million for MBDA to expand its services and assistance to the nation’s eight million minority businesses. This represents an increase of $3.6 million over FY 2016 appropriations.

“This budget is the recognition of this growing population’s potential, and a small investment to unleash its momentum,” she said.

MBDA currently funds a national network of minority business centers across the U.S., the District of Columbia and Puerto Rico that provide a variety of services to minority-owned firms, including business consulting, procurement matching, and private equity and venture capital sourcing.

Looking at the future of young entrepreneurs

Additional funding in the FY 2017 budget would build MBDA’s capacity to work with young entrepreneurs and conduct research that will enable government, business, and community leaders to make policy, programmatic and business decisions based on accurate and current information. 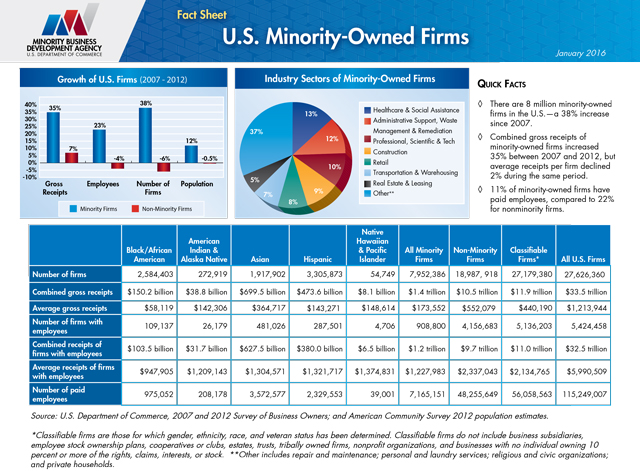 “If you can’t measure, you can’t manage what needs to change,” she explained. “There are 44 million Millennials in the USA. They are a very entrepreneurial generation, they believe in innovation and research, and we need to know how to help them when they approach their business aspirations,” Castillo added.

“Timely data will allow us to look at policy, and be more responsive to real needs,” Castillo said. “We are thrilled that minorities are an important part of the economic components of the USA economy. So far, and especially Latinos, we have been exclusively consumers but now we need to become producers, agents of transformation, and change the narrative around our communities,” she concluded.

For additional information about the President’s FY 2017 innovation and research budget, visit: https://www.commerce.gov/news/fact-sheets/2016/02/fact-sheet-fy-2017-us-department-commerce-budget