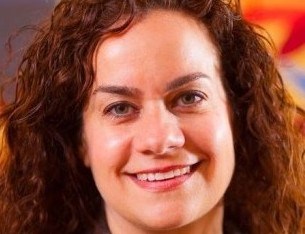 While traveling to Miami to receive our Hispanicize 2015 TECLA Award, I had the opportunity to meet personally with Ileana Musa for an exclusive interview. Ileana’s remarkable background precedes her: the Head of Global Client Segment and Strategy at Merrill Lynch, she formerly held leadership positions at Bank of America’s Global Wealth & Investment Management (GWIM) Banking group, BankBoston and JP Morgan Chase.

A soft-spoken small attractive Latina, she captivated me with her passion and conviction about the leadership role of Latinas in the corporate world, which speaks for her own story.

Ileana was born in Cuba, and came with her family to the United States in 1971 at the age of three. Raised by her single mom, who always instilled in her the eagerness to succeed through preparation and hard work, Ileana was awarded with a scholarship for her undergrad studies at University of Miami. She then pursued an MBA from Florida International University.  In 2004, she was sponsored for the Executive Development Program at the Kellogg School of Management. Ileana holds FINRA 4, 7, 24, 63 and 65 securities licenses, as well as her Life and Health Insurance license, and is Six-Sigma Greenbelt certified.

“Three years ago, my company encouraged me to represent them at the ALPFA Convention in Orlando. I was so inspired by their mission that I decided to get involved with the organization. Many ALPFA senior leaders impressed me for their aim at empowering Latinos–and specially women– to take the leadership role they deserve in the corporate world,” she said.

She was offered to jump on board joining ALPFA’s National Corporate Advisory Board. Six months later, she became the Chair of Women of ALPFA, the strategic initiative for leadership and empowerment of Latinas in corporate.

“I spent the last three years helping the organization increase its influence, as we launched a national platform for women and members to collaborate and share experiences. The 3-year strategy includes an umbrella theme, ‘Building the Legacy of Latina Leadership,’ with a specific focus for each year: the first year was The Power of Influence; the second, Using the Power of You, and the third one –currently underway–, Making an Impact in a Global Society,” she explained.

The idea behind the initiative is to create and develop a competency model in which Latinas at all levels can acquire skills in each topic. The program sustains three tracks, an entry-level track for student Latinas, and mid- and senior-level tracks for those waiting in the pipelines.

Another important goal of the program was to conduct activities at a local level to encourage Latinas’ participation and attract corporate sponsors. With 135 university chapters and 43 professional chapters across the country, Women of ALPFA promoted the importance of Latina leadership by exploring these topics through a series of events that included panel discussions, presentations and networking. It was also an opportunity to provide its 23,000 members with a relevant voice.

“It was very important to work locally to convoke Latinas so they bring others along in every city. The program has three strategic pillars that are instrumental to their success: how we continue to develop Latina leaders in the workplace; how we connect these women; and how we leverage the Women of ALPFA brand so that companies can attract and retain Latino talent,” she said.

Ileana believes one of the most imperative aspects of the initiative is to connect Latino women, who bring extraordinary experience to the table.

“There is vast experience out there and many stories that need to be connected so we can help one another,” she noted. With the support of Charles Garcia, recently named ALPFA’s CEO, and Lori Ruff, Chief Brand Evangelist, the organization brings extraordinary value to corporate sponsors around the nation.

Ileana sustains that these corporate sponsors are very eager to engage because they understand that developing this talent will only reflect of their gain in Hispanic/Latino market share and employee retention.

“When corporate sponsors send their employees to an ALPFA event, and they experience a conference or summit for the first time, they become much more connected to their companies. They better understand the opportunities that might lie in front of them and become more committed to make them happen. It is really a win-win situation,” she shared.

Although Latinas are still sorely under-represented in the C-suite and under-recognized in corporate America, Cuban-born Ileana believes the future holds great possibilities for Latinas. “I believe that, as Latinas, we bring uncommon skills to the table. In addition to our technical and professional competence, we are naturally endowed with a special set of soft skills related to our understanding of a global culture, our creativity, our willingness to collaborate and to be inclusive in getting the work done,” she concluded.

Cluttered workspace driving you mad? Try out these organization tips!