How to embrace life even when it sucks 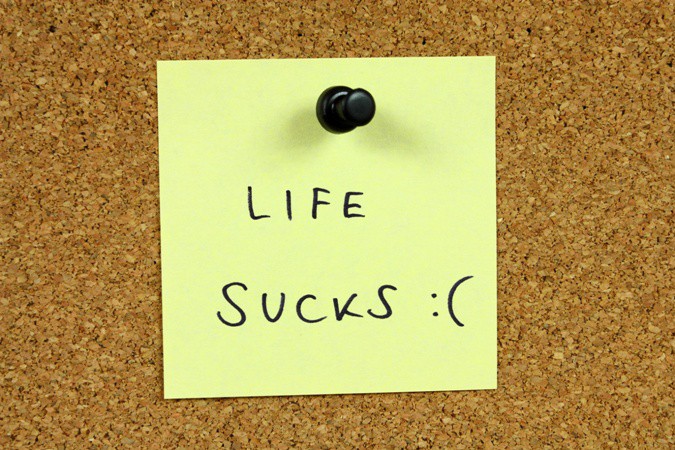 I recently ran across an old professional acquaintance. I originally met this person around 15 years ago. At the time he was on a professional trajectory that I figured would get him to retirement by 40. To be completely honest, I was a little jealous of him at the time and I recall frequently comparing myself to him to find out what made him so much more successful.

I lost touch with him for many years as he moved onward and upward. Several years ago we reconnected on Facebook. Unlike me, he is not a social media freak. As such, I didn’t learn too much about his personal life other than information gleaned from the occasional post – usually made by someone else.

After a networking event not too long ago I bumped into him and we decided to grab a drink. I wasn’t planning on sticking around after the event but I figured I would wait out Los Angeles rush hour traffic with a glass of cabernet.

In speaking with Joseph (not his real name) I learned that he had in fact done very well in the 10 years or so after I lost touch. He became a “player” in his area of expertise. He made a lot of money and was a known entity.

Unfortunately, like so many, he became a victim of the Great Recession. His business was flattened and after so many years he found himself standing on the ground with the rest of us.

It had been a few years and Joseph had not recovered his mojo. After hearing his story and the manner in which he conveyed it I could tell that the recession affected not only his business portfolio, but also how he viewed himself. His entire self-worth was tied into his business success. This was probably because all he had experienced was one success after another.

At this point I would be lying if I didn’t say that the conversation was making me completely uncomfortable. Sitting in rush hour traffic was sounding better and better. I was not Joseph’s close friend. I don’t consider myself the “touchy feely” type that likes this kind of stuff. All I could think about was my wife’s words of wisdom to me when she has a similar moment – “I don’t want you to solve my problem. I just want you to listen and acknowledge me.” So I did.

After Joseph was done sharing some fairly heavy stuff he asked for my advice. I really wasn’t prepared – nor trained to give advice. I was actually a bit shell shocked. But I managed to offer the two bits of advice:

I’ve had some pretty high highs and some pretty low lows. At times I have equated my life to a roller coaster. The one thing that has kept me from going insane, and what I thought Joseph needed to recognize is that Life IS difficult.

Life is not supposed to be a linear upward ride of success and good times. It just doesn’t work that way. Some people, like Joseph, have great extended periods of success. Others have more typical ebbs and flows. Regardless, if we are to remain sane in business, and in life, we must acknowledge that system is made to challenge us.

Once you understand how the game of life works then setbacks are not viewed so much as failures but instead they are just a part of the game. And while setbacks may not be fun, they are normal – even with the most successful business person. So long as you are upright and in the game you have another shot at success and scoring another point.

I’m not sure at what point I picked up this habit. But I have become known as the Paradise Guy. Every day that we wake up we have a choice. We can make it a good day or we can make it a crappy day. Which would you prefer?

Back in May 2014 I wrote about the importance of smiling when making sales calls, whether in person or on the phone. The concept of emotional contagion generally states that good vibes create more sales. As such, the key to a day of productive sales calls begins with the right attitude. On top of having more sales or a more productive day, who doesn’t prefer good vibes over bad vibes?

Today, regardless of how tired I am, how much stress I am under, how well or how horrible the day’s events have gone, it’s just Another Day in Paradise. And that seems to help.